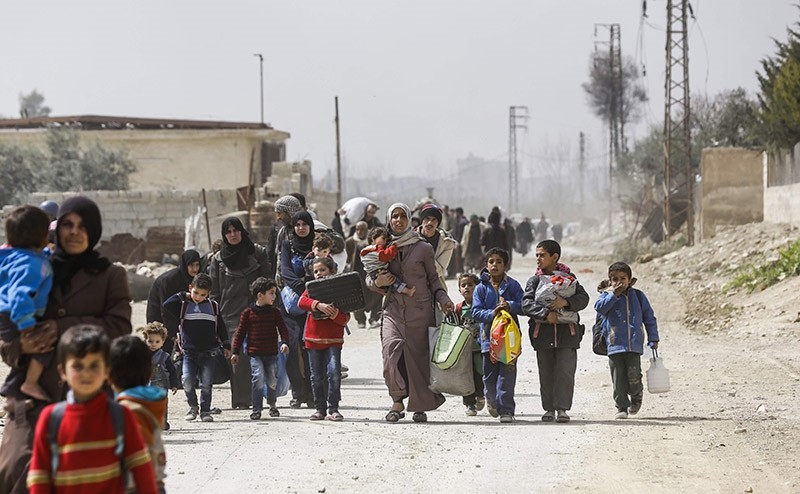 Syrians civilians evacuated from the eastern Ghouta enclave pass with belongings through the regime-controlled corridor opened by government forces in Hawsh al-Ashaari, east of the enclave town of Hamouria on March 15, 2018. (AFP Photo)
by French Press Agency - AFP Mar 16, 2018 12:00 am

Warplanes pounded Syria's eastern Ghouta on Friday as militant groups tried to resist an advance by Russian-backed regime forces and civilians looked for cracks through which to flee the five-year-old siege.

At least 57 civilians were killed as the toll for the month-old assault near Damascus continued to mount and world powers remained unable to stop one of the seven-year conflict's worst crises.

On the edge of Ghouta, a sprawling semi-rural area within mortar range of central Damascus, hundreds of civilians were still streaming out of destroyed towns, carrying scant belongings in bags and bundles.

Exhausted and distraught, the estimated 12,000 people who poured out of Ghouta on Thursday had harrowing tales of life in fear and deprivation, trapped for weeks in their cellars as regime and Russian jets rained bombs.

"We were around 66 families in the basement, with seven people per family," Hussein Samid told AFP, pausing on the roadside to smoke a cigarette.

"Those of us who were in the cellar got together and decided to leave, whatever the cost," the 40-year-old said.

Hundreds of them were crammed in a center on the edge of eastern Ghouta on Friday, unsure what the next step would be after walking straight into the arms of the forces that have relentlessly pounded their homes for weeks.

They were sitting on the ground and had little access to sanitation as the sudden exodus appeared to have caught the regime flat-footed.

Despite mild temperatures, most of them were wearing several layers of heavy winter clothes, the same they had kept on for weeks in their freezing basements.

Most of the civilians fleeing since Thursday have left from the town of Hammuriyeh, in the south of eastern Ghouta.

The militant groups which have dominated this area of the enclave over the past few years retook much of the town they had almost lost a day earlier, the Syrian Observatory for Human Rights said.

"Hayat Tahrir al-Sham and Faylaq al-Rahman have almost completely retaken the town but fighting continues on the outskirts," the Britain-based monitoring group said.

Few residents remain in Hammuriyeh itself but tens of thousands of others were still scattered across the southwestern pocket, the largest of three still in rebel hands.

President of the International Committee of the Red Cross Peter Maurer, who was inside opposition-held Ghouta on Thursday when food aid was brought in, voiced his exasperation with the continued bloodshed.

"I am myself with many humanitarian workers on the ground both exhausted and fed up with the blind justification of gross violations against civilians," he said in a statement.

The Observatory said at least 57 civilians were killed in Russian air strikes on Kfar Batna and Saqba, in the southwestern Ghouta pocket on Friday.

The latest deaths brought to more than 1,300 the number of civilians killed since the start of the ground and air offensive on the enclave on February 18, around a fifth of them children.

Bashar al-Assad has in recent months recovered swathes of territory lost at the beginning of the conflict and Ghouta was one of his key remaining targets.

No deal has been reached with the opposition fighters inside Ghouta, some of whom are militants and ex-members of a former Al-Qaeda affiliate.

In seven years, more than half of Syria's pre-war population of 20 million has been displaced.