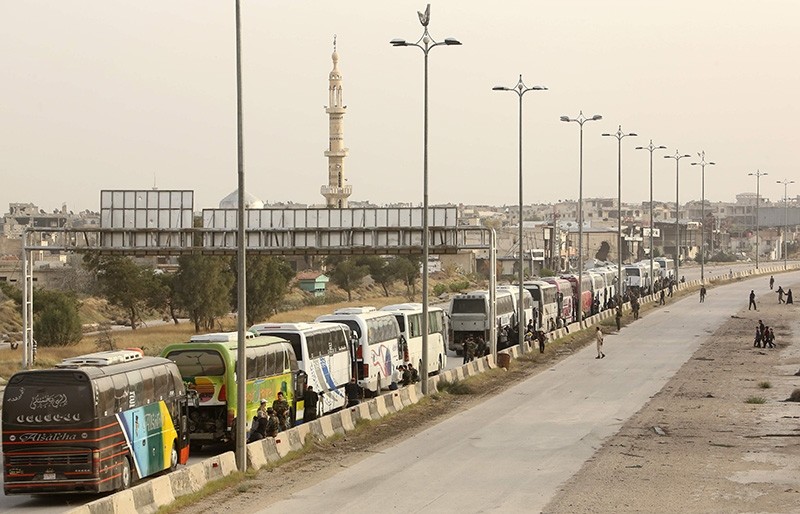 A picture taken on March 22, 2018 shows an elevated view of Syrian opposition fighters waiting by buses at the entrance of Harasta in eastern Ghouta on the outskirts of the capital Damascus (AFP Photo)
by Associated Press Mar 22, 2018 12:00 am

Hundreds of Syrian opposition fighters and their relatives began evacuating a key besieged town in eastern Ghouta on Thursday, marking the first such opposition surrender from the bombed-out region east of Damascus.

The departure of opposition fighters from the powerful Ahrar al-Sham group could serve as a blueprint for other rebels in other towns, bringing the Assad regime closer to recapturing the entire territory following years of siege and relentless bombardment.

Syrian TV broadcast footage showing dozens of white buses that had been parked along a main highway for hours, with opposition fighters and civilians on board, start to drive out in a long convoy. It said among the 1,580 evacuees were 413 gunmen. More are expected to leave in coming days.

As the opposition prepared to depart the town of Harasta, thousands of civilians streamed out of other areas in eastern Ghouta that were still being bombed by the regime. They included dozens of civilians who appeared to be wounded, some hobbling on crutches, another with an eye injury.

The regime's assault has sparked a tide of displacement in the Damascus suburbs as civilians try to escape the violence. Some have moved deeper into the opposition-held enclave, while some 50,000 others have crossed the front-lines, to regime authorities.

The regime's air and ground assault, which escalated Feb. 18, has seen the once sprawling territory at the doors of the capital shrink to three disconnected opposition-held islands. The evacuation by Ahrar al-Sham from Harasta, if it goes through Thursday, could serve as a blueprint for other rebels in other towns, bringing the regime closer to recapturing the entire territory.

The international medical charity Doctors Without Borders said the advancing regime forces had captured or destroyed 19 of the 20 hospitals the group was supporting just one week ago. It said the medical staff was fleeing the approaching front lines.

The opposition holds just 20 percent of the eastern Ghouta territory they held one month ago, according to the Britain-based Syrian Observatory for Human Rights monitoring group. But that territory includes several densely populated residential zones including Douma, the largest town in eastern Ghouta.

Opposition and the regime exchanged 18 prisoners ahead of the Harasta evacuation, according to pro-regime media.

The 13 men released by the Syrian opposition identified themselves to the media outside Harasta as soldiers and civilians attached to the Syrian army, who were captured by the opposition in the fighting for Harasta. Crying in relief, they thanked God, the Syrian army and Assad for their freedom.

The deal for Harasta will see 1,500 opposition fighters and 6,000 civilians leave to an opposition-held province in northwest Syria, according to the state-affiliated Military Media Center.

Monther Fares, a spokesman for the opposition faction Ahrar al-Sham, confirmed that his group's fighters were preparing to depart. Fares said the opposition agreed to leave because of "civilian pressure" resulting from intensive airstrikes and "warplanes that do not leave the sky," adding that residents of Harasta have spent the last three months inside shelters.

But the arrangement leaves other fighters for the Failaq al-Rahman group still inside. The regime is threatening to move on them if they do not also agree to depart.

State-affiliated al-Ikhbariya TV cast the deal as a victory for the country. Its correspondent Rabieh Dibeh said the regime would restore its authority over Harasta once the "terrorists" left the town. He said defectors from the army would be ordered to rejoin the service.

Critics say it is a formula for displacement that legitimizes the regime's brutal siege tactics that have deprived hundreds of thousands of civilians of food and medicines and subjected them to a half-decade of violence. Numerous, top U.N. officials have likened the tactics to war crimes and crimes against humanity.