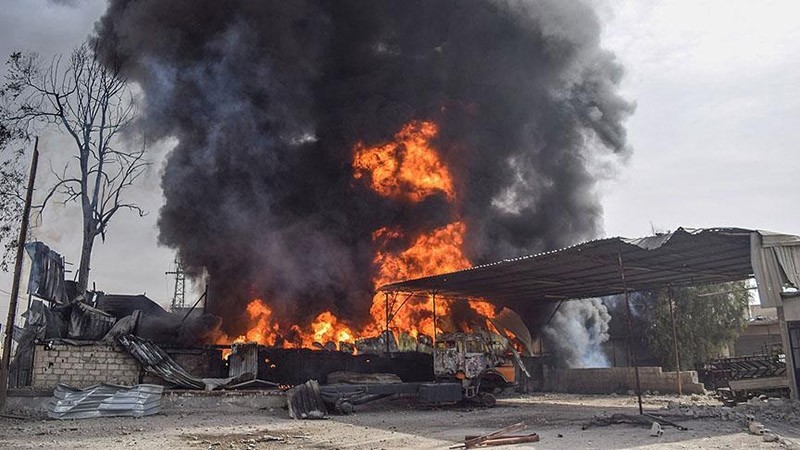 At least 37 civilians burned to death in an attack on a shelter by Assad regime forces and its supporters in Syria's eastern Ghouta, the Anadolu Agency said Friday citing the White Helmets.

In statements made on its social media accounts, the civil defense group said fighter jets had been used to hit the shelter inhabited by civilians with inflammable "napalm" bombs, as reported by Anadolu Agency.

Rescuers, known as White Helmets, said all 37 people died in a single airstrike that hit an underground shelter in Arbeen. The Syrian Observatory for Human Rights also reported the attacks and said regime troops advanced in Hazeh south of Arbeen. In 1980, the U.N. Convention on Certain Conventional Weapons banned the usage of flammable Napalm bombs against civilians.

Numerous children and women were among the civilian victims according to initial findings, the Syrian civil defense group said, underlining that the death toll could rise.

Due to the intense air bombings by the regime and its supporters, civilians in eastern Ghouta cannot leave their shelters.

The Assad regime intensified its attacks on February 19 in order to fully take control of the opposition-held town, and launched a ground operation on March 3.

Around 400,000 citizens of opposition-held eastern Ghouta have been living under regime blockade for the past five years.

On Feb. 24, the U.N. Security Council unanimously adopted Resolution 2401, which calls for a month-long ceasefire in Syria, especially eastern Ghouta, to allow the delivery of humanitarian aid.

Despite the cease-fire resolution, however, the regime and its allies early this month launched a major ground offensive backed by Russian air power, aimed at capturing opposition-held parts of the district.

Eastern Ghouta has remained under a crippling regime siege for the last five years that has prevented the delivery of badly-needed humanitarian supplies. Despite the fact that as many as 400,000 people live in the city with scarce medical facilities and food, the regime has continued attacks and blocked delivery of international aid.

Even though the U.N. considers the siege and deprivation of water and food to be war crimes, all attempts to end the blockade have been unsuccessful. Russia, the main backer of the Assad regime along with Iran, ordered a humanitarian pause in an attempt to demonstrate its clout in the deadly civil war. The pause was set for five hours to create a corridor to allow civilians to exit the area. The Russian Defense Ministry said it would help injured civilians leave the town. Yet, the pause has been violated by the regime.