2nd pocket of Syria's Ghouta to be evacuated, only Douma left in opposition hands 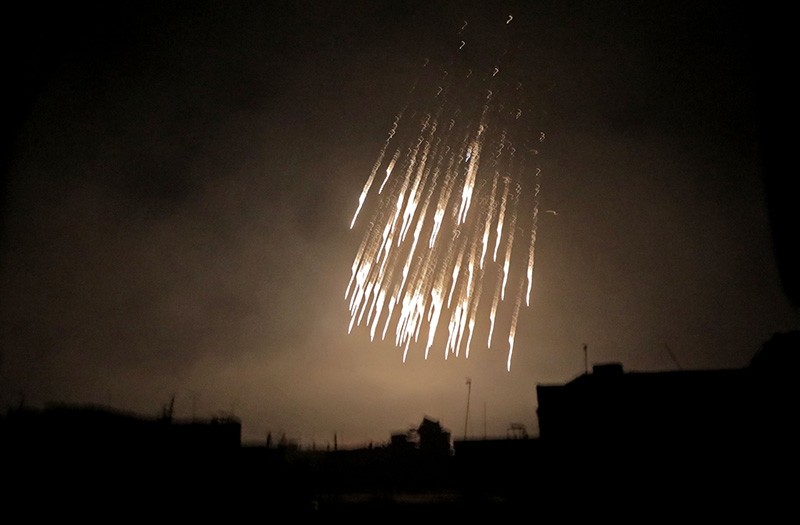 A picture taken early on March 23, 2018 shows what appears to be white phosphorus incendiaries landing during regime bombardment in Douma in eastern Ghouta on the outskirts of the capital Damascus. (AFP Photo)
by Compiled from Wire Services Mar 24, 2018 12:00 am

Syrian opposition fighters left one besieged enclave on Friday and agreed to abandon another, leaving only the city of Douma still in insurgent hands in eastern Ghouta after a month-long army assault to drive them from the stronghold near Damascus.

It brings Bashar al-Assad to the cusp of his biggest victory over the opposition since driving them from Aleppo in December 2016, though they remain entrenched in areas of northwestern and southwestern Syria.

Shortly before the cease-fire went into effect at midnight Thursday, intense regime attacks killed at least 37 people in an underground shelter, prompting the truce and later the agreement between Faylaq al-Rahman opposition group and the regime to evacuate the area.

Friday's agreement will mean the surrender of the second of three pockets in eastern Ghouta, where rebels have been holding up over the past years. On Thursday, hundreds streamed out of Harasta, the first pocket after a similar negotiated cease-fire and evacuation of armed fighters and civilians.

The rebel group Faylaq al-Rahman, which controls the second pocket, asked for the latest cease-fire after the intensified assault on territories it controls.

The offensive to capture the towns and villages on the outskirts of the capital, which began on Feb. 18 with a massive bombardment, has brought 90 percent of eastern Ghouta back under regime control. More than 1,600 people have been killed, a war monitor said.

Regime soldiers fired tracer bullets into the night air in celebration on Friday as the last groups of opposition fighters in the town of Harasta boarded buses for opposition territory in the northwest along with family members.

They had agreed to surrender the town in return for safe passage out and a pardon for civilians who chose to remain there as the regime took back control.

The regime's assault, backed by Russia, was one of the fiercest of the seven-year-old war and was carried out in defiance of international pleas to halt and honor a ceasefire.

At the start of the offensive, the United Nations estimated 400,000 people were trapped inside the besieged area without access to food or medicine.

Regime television broadcast the departure of opposition fighters and their families. From behind a half-drawn curtain, a woman in a headscarf could be seen gazing out through a spiderweb of bullet holes and cracks in the window of a bus as it prepared to carry her to exile.

A Reuters witness near where the buses were gathering said some men had disembarked to pray while women and children walked nearby.

Meanwhile, opposition fighters in a second pocket around the towns of Arbin, Jobar, Zamalka and Ein Terma said they had also agreed to leave for the northwest with their families and any other civilians who did not wish to come back under Assad's rule.

People who wished to stay on would not face prosecution, said Wael Alwan, spokesman for the Failaq al-Rahman group there, adding that the group would also release captured government soldiers.

About 7,000 people would depart in the deal starting on Saturday morning, including fighters carrying light weapons, regime TV reported.

But bombs still fell on Friday on the besieged city of Douma, from which thousands of people have fled into regime territory in recent days.

Once opposition fighters complete their agreed withdrawals from the other areas, it will stand as the last battered and besieged opposition zone in eastern Ghouta, itself the opposition's last major bastion near the capital.

The Assad regime's assault to recapture the area has been marked by tactics the army has used to crush resistance since Russia joined the war on Assad's side in 2015 - lay siege to an area, bombard it, launch a ground assault and finally offer the opposition fighters and their families safe passage to the northwest.

After helping turn the tide of the war in Assad's favor with air power and military support, Russia has increasingly cast itself as a peace-broker. Russian representatives have played a role in negotiating local ceasefires and evacuations.

Assad and his allies say their offensive in eastern Ghouta is necessary to end the rule of militants over the area's people, and to stop them shelling regime areas.

A source in the Syrian Arab Red Crescent agency said four of its members, as well as other civilians, were injured on Friday by an explosion in Harasta. The war monitor, the Syrian Observatory for Human Rights, said the blast was caused by opposition fighters detonating their arsenal before departing.

By the time the last convoy departed Harasta on Friday evening, state media reported that scores of buses had left, carrying thousands of people including well over a thousand fighters. Shortly afterwards, the regime army retook the town, the Syrian media said.

Regime television broadcast footage of what it said was about 3,400 people leaving Douma on foot on Friday morning, carrying small children and belongings. Thousands of civilians have made the same journey over the past week, making their way to reception centers in regime-held territory.

They were leaving behind them a blast-wrecked landscape of smashed concrete and twisted metal, where for weeks people have cowered in basements from the unrelenting bombardment.

Already besieged for years, people in eastern Ghouta have suffered acute shortages of food and medicine, and during the weeks-long battle they were often unable to leave their homes even to bury the dead.

The United Nations estimates more than 50,000 people have fled besieged areas of eastern Ghouta in the past two weeks.