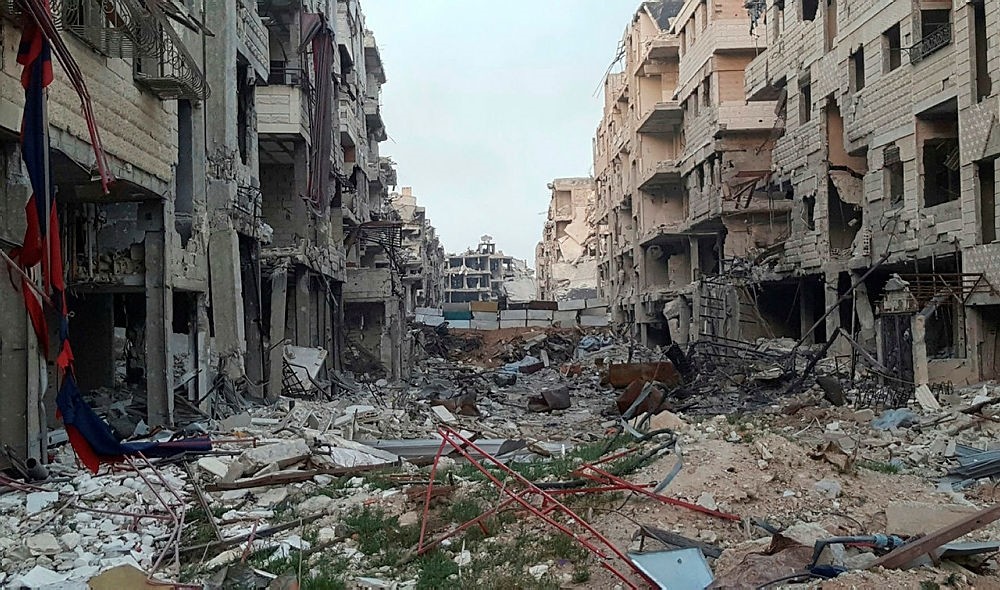 Damaged buildings due to fighting and Assad airstrikes in the town of Harasta, in eastern Ghouta region east of Damascus, Syria. (Danny Makki via AP)
by Compiled from Wire Services Apr 01, 2018 12:00 am

A group of Syrian opposition fighters began on Sunday to leave their last bastion in eastern Ghouta to head to opposition-held Idlib in northwestern Syria, state media said.

The move is the first such withdrawal of Failaq al Rahman fighters from besieged Douma, where the dominant opposition group Jaish al Islam is still negotiating a deal with Russia over surrender terms that gives them the option of leaving the enclave or making peace with the Assad regime.

A deal was reached last night by a negotiating committee to evacuate wounded Jaish al Islam civilians and fighters to northwestern Syria, but it was not clear if it was part of a broader deal that includes in later stages the pullout of fighters.

Reports of evacuations and negotiations come after the regime army on Saturday vowed to finish off opposition factions in Douma.

A statement said the military would press on with "fighting in the area of Douma to rid it of terrorism", in reference to the moderate opposition groups.

That announcement came after Syria's state news agency SANA reported the southern pocket of Eastern Ghouta was "empty of terrorism" as the last buses left it on Saturday afternoon.

The regime assault since February 18 has killed more than 1,600 civilians, the Observatory says, and devastated entire neighborhoods.

Tens of thousands of people have hit the roads, with their belongings stuffed into bags or carrying blankets, to flee out of the enclave into regime-held territory.