Syrian returns to Eastern Ghouta to find sea of devastation 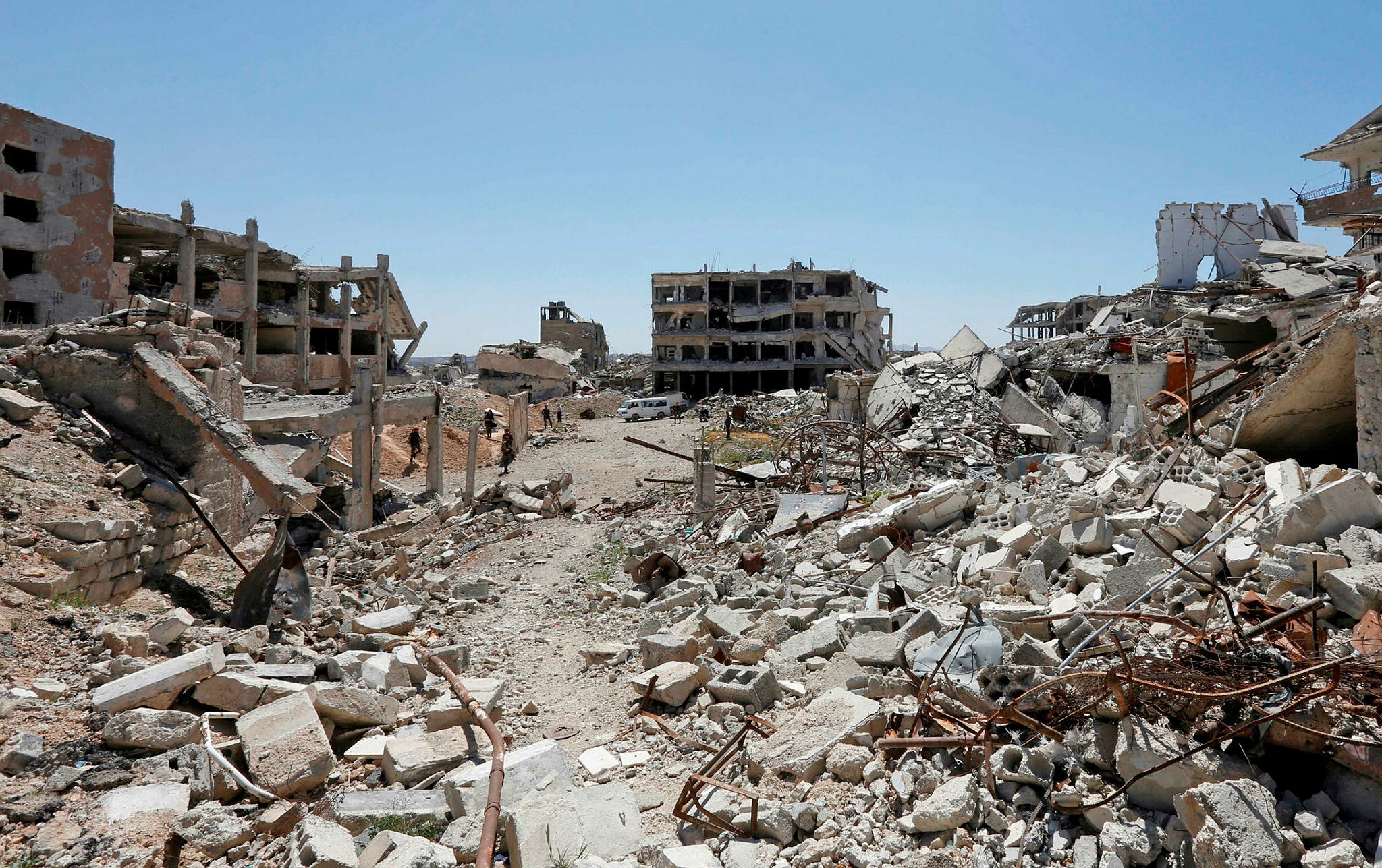 A general view shows the destruction in Jobar in Eastern Ghouta, on the outskirts of the Syrian capital Damascus on April 2, 2018. (AFP Photo)
by Associated Press Apr 02, 2018 12:00 am

A journey that before the war in Syria was just a 15-minute drive from Damascus now took well over an hour, clambering over giant ramparts of dirt and rubble. Visiting his house in the town of Harasta for the first time in six years, Danny Makki couldn't recognize it.

"I didn't even know it was my street till I recognized the supermarket opposite the house ... no placards, no signs, just destruction," he said.

The visit this week by Makki, a British-born Syrian journalist, provided a first look into the devastation wreaked in Harasta, where opposition fighters surrendered after a ferocious, Russian-backed air and ground offensive by Assad regime forces aiming to retake the region of eastern Ghouta on the edge of the Syrian capital.

Syrian returns to Eastern Ghouta to find sea of devastation as Assad regime nearly wipes the town off the maphttps://t.co/bfQLZAsqjA pic.twitter.com/cZFxsgAlHq

The moderate opposition agreed to lay down their arms in return for safe passage to opposition-held northwestern Syria. As thousands of fighters were bused out, Harasta's civilians have been transported to government centers in and around Damascus, leaving the town, once home to a population of around 35,000, an empty, shattered husk.

Harasta, on Damascus' northeastern edge, was among the first to rise up against Bashar Assad's rule in 2011 and soon fell into the hands of the moderate opposition along with other towns of eastern Ghouta. For six years, the army has been trying to uproot the opposition in grueling warfare with no decisive victory, until the assault that began last month. Harasta was declared officially under Syrian army control on Friday.

The area is still restricted to civilians while army experts work to clear explosives. But Makki, who is temporarily based in Damascus, was able to enter briefly Monday afternoon to check on his home, where his mother and grandmother lived before the war.

Makki passed a water station on the edge of town that not long ago had been a front-line battle zone. He walked down dirt roads where tanks and military trucks kicked up clouds of dirt. The sky was black with smoke; looters were burning scrap to extract copper and other metals, the last things to be stripped from a town where over the past six years anything of value had been ripped out.

At the intersection leading to his house, a row of buses blocked the road, he said. So he had to climb over 3-meter-high (10-foot-high) mounds of dirt that had been put up as barriers between the two warring sides. Then over under huge pile of dirt that had been in place so long grass had grown out of it, he said.

"The streets were empty. It was like a ghost town," he said. He passed a cemetery where holes had been blasted in the walls.

"Not even the dead could escape this war," he said.

His district is called Hay el-Hada'eq, or Gardens Neighborhood. "I just saw streets full of rubble so deep you couldn't even see the ground at some point," he said.

When he spotted the supermarket and realized he was on his street, he found his apartment building. It didn't seem so bad at first sight. But then he went in and saw even the elevator was gone. The stairs were blackened, covered with rubble and glass. The apartment itself was a shell, walls blasted open to the street on three sides, floors piled with wreckage. All belongings in it were long gone, even the doors.

Slogans were scrawled on the walls by both Assad regime troops and moderate opposition fighters, showing that both sides had occupied the house at various times over the years.