Trump says will pull out as CENTCOM refutes him, White House emphasizes local forces in US’ Syria withdrawal quagmire 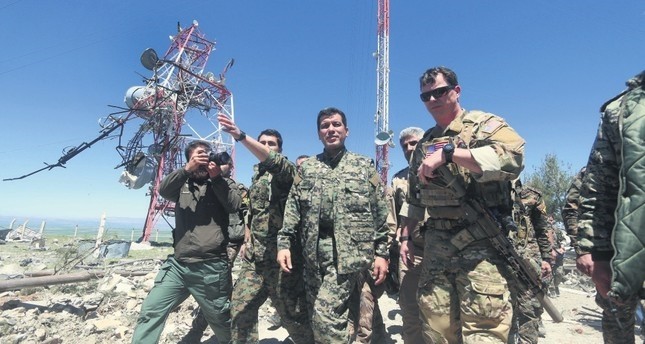 A US military commander (R) seen walking with a commander (C) from PKK's Syrian wing of People's Protection Units (YPG) as they inspect damage at YPG headquarters after it was hit by Turkish airstrikes in Mount Karachok near Malikiya, Syria April 25.
by Emre Başaran Apr 04, 2018 12:00 am

Contradictive statements about the withdrawal of American soldiers from Syria make it harder to determine what the U.S.' actual move will be as the Trump administration seemingly fails to unify in its Middle East policy

"Three different statements in three days. If that confusion continues, journalists working in Washington, DC will require mental health checks in no time," a frustrated correspondent tweeted Wednesday as things are boiling in the American capital over what the actual U.S. policy about withdrawing from Syria will be.

U.S. President Donald Trump first made his surprise announcement on March 29, saying the U.S. would withdraw from Syria in the near future.

On the other hand, General Joseph Votel, the commander of the U.S. Central Command which coordinates anti-Daesh operations in Iraq and Syria, implied that the United States will not yet leave Syria, saying there "are still some areas where Daesh terrorists are present."

All that confusion went a little bit further late Wednesday, as White House press secretary Sarah Huckabee Sanders said that they are focusing on transitioning to "local enforcement" in Syria, in other words the U.S.-backed People's Protection Units (YPG) militants.

"The president has maintained all along that our focus is on defeating ISIS. There we've made significant progress since the president took office with the complete collapse of the caliphate... but we want to focus on transitioning to local enforcement," Sanders said, using an alternate acronym for the Daesh terrorist group.

The U.S.' support to the YPG, Syrian affiliate of the globally recognized terrorist group the PKK, has been a source of diplomatic crisis between Turkey and the United States. Even though there is mounting evidence for the ties between the two groups, the U.S. continues to ignore them under the pretext of fighting against Daesh.

Previously, President Recep Tayyip Erdoğan voiced his skepticism over the Trump administration, questioning whether or not the U.S.' objection to withdrawing the YPG from Manbij was really Trump's own will.

Trump's comments came amid talks between Turkish and U.S. officials over deciding a roadmap for Manbij, including the withdrawal of the YPG and the return of U.S. weapons provided to the terror group.

Although the Syrian war has continued since 2011, U.S. military involvement in the war did not start until 2014 when it entered into the country to fight against Daesh. However, the military involvement of the U.S. not only targeted Daesh but also Syrian regime forces in 2017 as a response to the use of chemical weapons. However, despite being not involved directly in the war, the U.S. has been training the Syrian opposition since almost the beginning of the war. There were two separate programs that were designated to support the opposition forces; one had more of a military approach and aimed to train 15,000 opposition soldiers while the other one was conducted by the CIA. However, the two programs were canceled in 2015 and 2017, respectively, due to falling short of expectations.