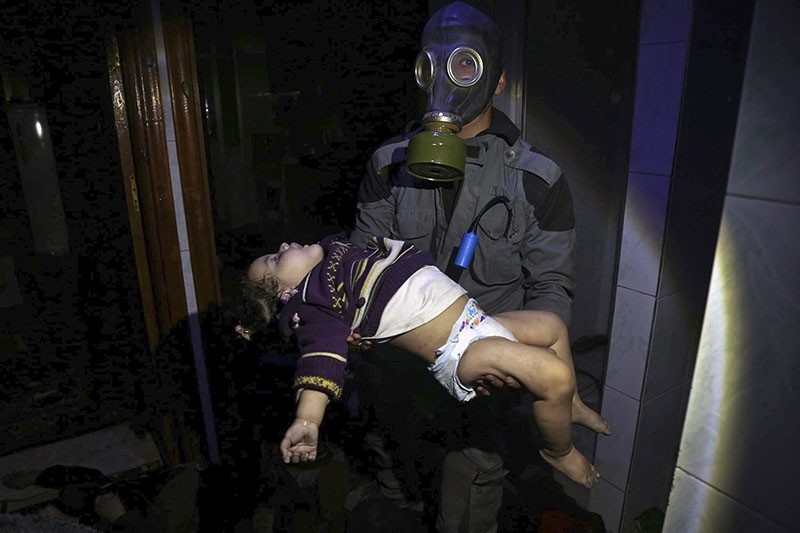 This image released on April 8, 2018 by the Syrian Civil Defense White Helmets, shows a rescue worker carrying a child following an alleged chemical weapons attack in the opposition-held town of Douma, near Damascus, Syria. (White Helmets via AP)
by French Press Agency - AFP Apr 08, 2018 12:00 am

The United States strongly condemned an alleged chemical weapons attack in Syria's eastern Ghouta late Saturday, saying if proved Russia would bear some responsibility due to its "unwavering support" for the regime.

Douma, the last opposition holdout in eastern Ghouta, was pounded by renewed airstrikes that killed 70 civilians in around 24 hours -- while 11 people also suffered breathing problems.

President Donald Trump said on his Twitter account that Syria's Assad will pay a big price for the chemical attack in Douma, blaming Russia and Iran for backing the regime.

Many dead, including women and children, in mindless CHEMICAL attack in Syria. Area of atrocity is in lockdown and encircled by Syrian Army, making it completely inaccessible to outside world. President Putin, Russia and Iran are responsible for backing Animal Assad. Big price...

....to pay. Open area immediately for medical help and verification. Another humanitarian disaster for no reason whatsoever. SICK!

If President Obama had crossed his stated Red Line In The Sand, the Syrian disaster would have ended long ago! Animal Assad would have been history!

"These reports, if confirmed, are horrifying and demand an immediate response by the international community," U.S. State Department spokeswoman Heather Nauert said in a statement.

"The Assad regime and its backers must be held accountable and any further attacks prevented immediately," she added.

"Russia, with its unwavering support for the regime, ultimately bears responsibility for these brutal attacks."

Nauert repeated the U.S.'s previous assertions that Moscow had "breached its commitments to the United Nations as a framework guarantor" and questioned the Kremlin's commitment to ending the crisis.

"Russia's protection of the Assad regime and failure to stop the use of chemical weapons in Syria calls into question its commitment to resolving the overall crisis and to larger non-proliferation priorities," she said, calling upon Moscow to join international efforts to prevent further attacks.

The Assad regime has been repeatedly accused of using chemical weapons, with the United Nations among those blaming regime forces for a deadly sarin gas attack on the opposition-held village of Khan Sheikhoun in April 2017.

Since Feb. 18, the regime's Ghouta offensive has killed more than 1,600 civilians.

The regime has used a combination of a fierce military onslaught and two negotiated withdrawals to empty out 95 percent of the enclave near Damascus, but opposition forces are still entrenched in its largest town of Douma.