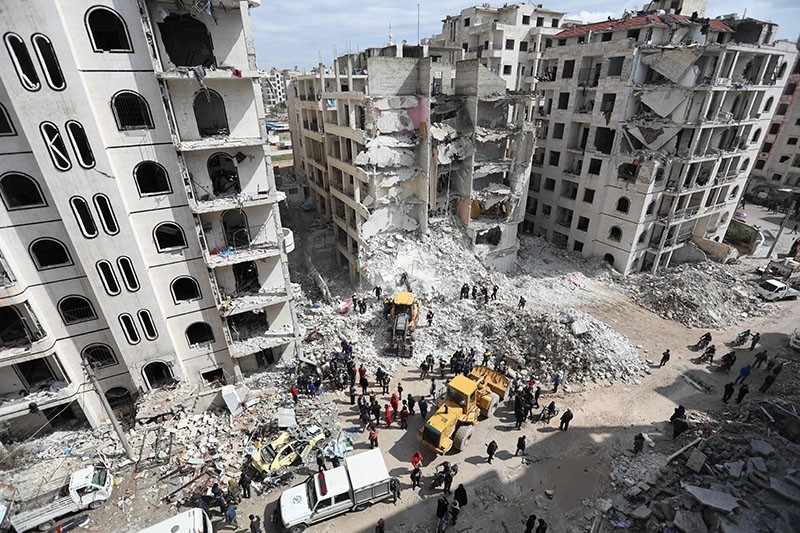 Syrian rescue clear the rubble in the morning of April 10, 2018 at the site of an explosion of unknown origin which wrecked a multi-storey building the previous night in the war-battered country's northwestern city of Idlib. (AFP Photo)
by Daily Sabah with Wires Apr 09, 2018 12:00 am

The death toll from a deadly explosion in Syria's northwestern city of Idlib has risen to 28, according to a local civil defense official on Tuesday.

Around 135 people have been injured in the blast that struck a residential building in the city on Monday, Muhammed Haj Youssef told Anadolu Agency.

Earlier reports had put the death toll at 15 and 36 people injured.


The cause of the blast remains unclear. The cause of the explosion was a ballistic missile fired from a Russian warship stationed in the Mediterranean, Ihlas News Agency said, citing local sources.

Youssef said search and rescue efforts were still underway to look for survivors under the debris.

Controlled by anti-regime armed groups, Idlib has been under intense airstrikes for the last two months, which caused hundreds of deaths and injuries, according to civil defense sources.

Located in northern Syria near the Turkish border, Idlib was declared last year a "de-escalation zone" where acts of aggression are forbidden.

Syria has been locked in a devastating civil war since March 2011, when the Bashar al-Assad regime cracked down on pro-democracy protests with unexpected ferocity.

UN officials say hundreds of thousands of people have been killed in the conflict.