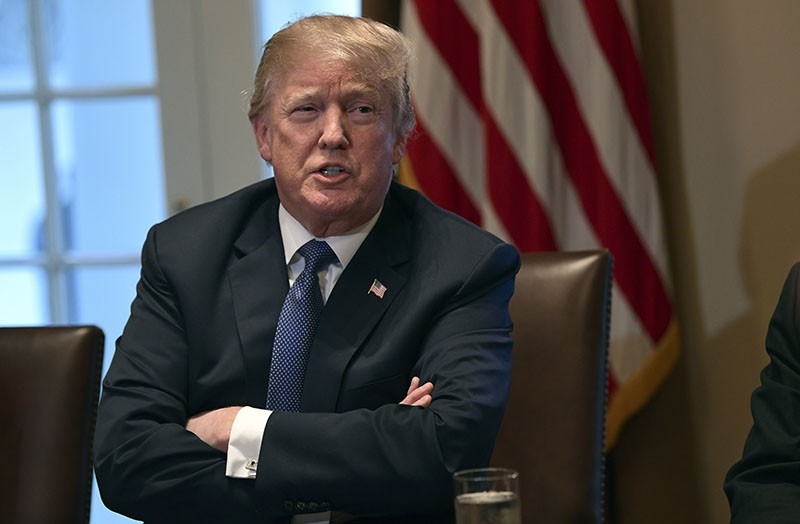 President Donald Trump speaks in the Cabinet Room of the White House in Washington, Monday, April 9, 2018, at the start of a meeting with military leaders. (AP Photo)
by Daily Sabah with Agencies Apr 11, 2018 12:00 am

In a provocative tweet, U.S. President Donald Trump mocked Russia's recent warning on responding to any attack targeting the regime, declaring that missiles "will be coming" and blasting Moscow for standing by Bashar Assad, the usual suspect of the alleged chemical attack in Syria's Douma.

"Russia vows to shoot down any and all missiles fired at Syria. Get ready Russia, because they will be coming, nice and new and 'smart!' You shouldn't be partners with a Gas Killing Animal who kills his people and enjoys it!" Trump wrote in a post on Twitter Wednesday.

Russia vows to shoot down any and all missiles fired at Syria. Get ready Russia, because they will be coming, nice and new and "smart!" You shouldn't be partners with a Gas Killing Animal who kills his people and enjoys it!

Our relationship with Russia is worse now than it has ever been, and that includes the Cold War. There is no reason for this. Russia needs us to help with their economy, something that would be very easy to do, and we need all nations to work together. Stop the arms race?

Defense Secretary James Mattis said Wednesday the Pentagon is ready to provide options for a Syria strike in response to a suspected chemical attack, but noted the U.S. and its allies are still gathering information.

"We are still assessing the intelligence, ourselves and our allies, we are still working on this," Mattis said when asked if he had seen enough evidence to blame the Assad regime for the alleged chemical attack in Douma.

"We stand ready to provide military options if they're appropriate as the president determined."

Local sources and NGO's working in the area said that at least 70 people were killed and dozens of others were injured in Saturday's alleged chemical attack by Assad regime forces in the eastern Ghouta town of Douma near Syria's Damascus. Neighboring Turkey, the U.S., the U.K., France, Germany and have blamed Assad regime for the attack, which is denied by Russia and the regime.

Department of State Spokeperson Heather Nauert said Wednesday on Twitter: "Reports from contacts on the ground in Douma are credible and will be investigated by the independent OPCW fact-finding mission. This was a barbaric attack and the international community must hold any party that uses chemical weapons accountable. We will stand up for the people of Syria."

Reports from contacts on the ground in #Douma are credible & will be investigated by the independent #OPCW fact-finding mission. This was a barbaric attack & the int'l community must hold any party that uses #ChemicalWeapons accountable. We will stand up for the people of #Syria.

The White House announced later on Wednesday that U.S. President Trump holds the Assad regime and Russia responsible for the chemical attack, adding that the final decision regarding Syria has not been made yet but "all options are on the table."

In response to Trump's statement, Russian Foreign Ministry Spokesperson Maria Zakharova said "Smart missiles should fly toward terrorists, not legal governments." She added that a strike could be an attempt to destroy evidence of an alleged chemical attack on ground in Syria.

Russian President Vladimir Putin, on the other hand, said Wednesday Russia will respect all its obligations under international law and seek constructive relations with foreign partners.

"The state of the world cannot but provoke concern. The situation in the world is becoming more and more chaotic but all the same we hope that common sense will finally prevail and international relations will take a constructive path," Putin said as new ambassadors presented him with their credentials at the Kremlin.

The World Health Organization reported Wednesday that 500 Syrian patients treated after Saturday's attack on the city of Douma showed signs of suffering from a toxic chemical attack.

Meanwhile, Turkey's Prime Minister Binali Yıldırım urged the U.S. and Russia to cooperate in the Middle East to relieve the wounds of civilians and ensure the territorial integrity of Syria and Iraq without going hand in hand with terror organizations.