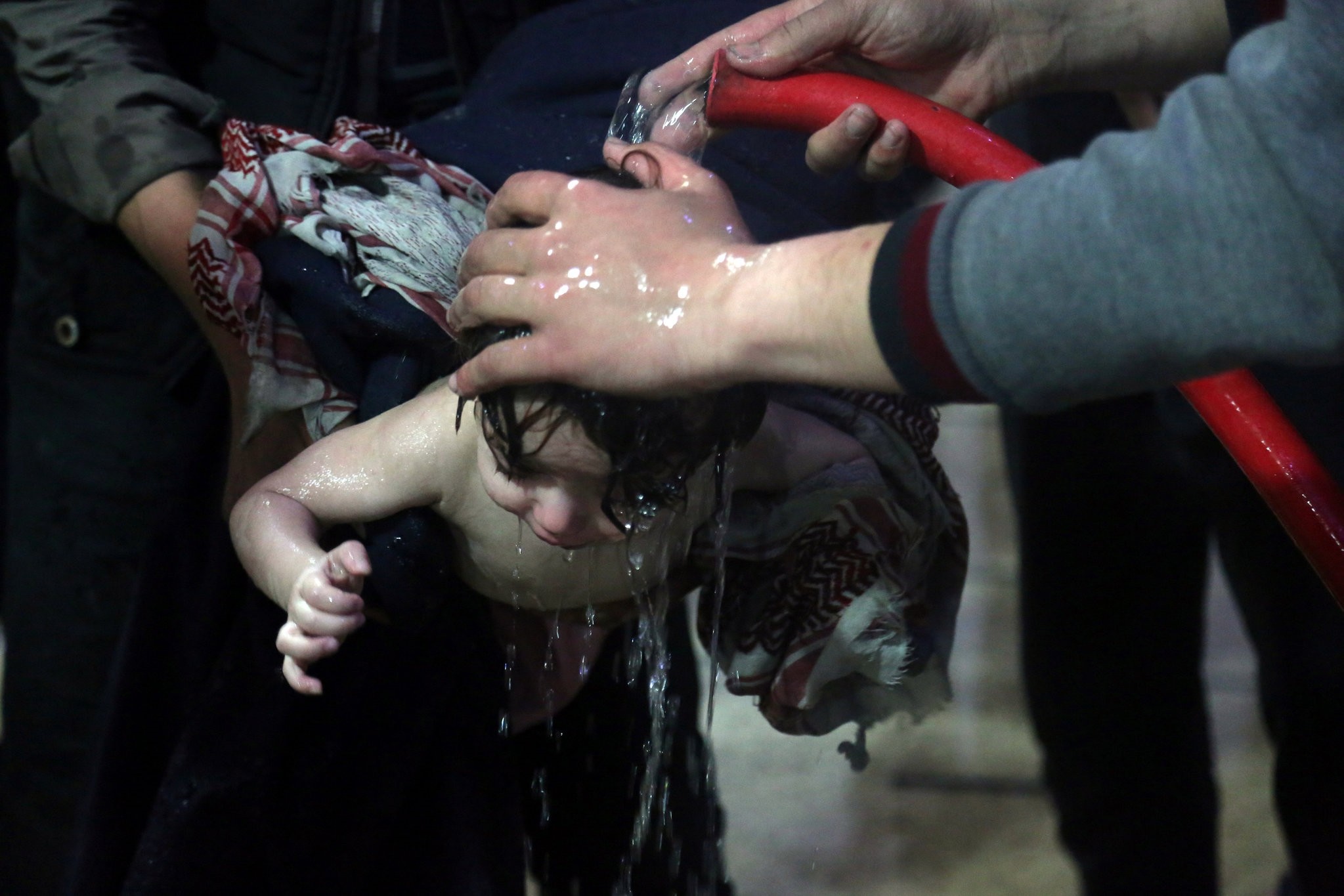 A staunch opponent of the Syrian regime's brutality against its own people, Turkey echoed the international community's concern over the chemical attack in Douma and President Recep Tayyip Erdoğan said yesterday that whoever carried it out would "pay heavily" for it

As the international community weighs how to respond to last weekend's chemical attack in the Douma district of Syria's Eastern Ghouta, Ankara has echoed the concerns of the West. Addressing a meeting of his ruling Justice and Development (AK) Party in the capital Ankara yesterday, President Recep Tayyip Erdoğan used harsh rhetoric against the perpetrators of the attack. Regime forces are blamed for the attack that left around 70 people dead, although Damascus and its allies have denied responsibility.

Erdoğan said he condemned "whoever" carried out this "massacre," adding the culprits would "definitely pay heavily for this." His remarks were similar to those of U.S. and European leaders and officials who said that there would be a price to pay in the aftermath of the attack that targeted an area controlled by rebels. Bashar Assad forces had already assumed control of wide swathes of Eastern Ghouta at the time of the attack, only one among many of its kind during the eight years of civil war in Syria.

Turkey, which tried to persuade the Syrian regime to end violence against protesters at the start of the uprising in 2011, has gradually stepped up its rhetoric as the regime became more aggressive and the opposition was forced to take up arms. As the conflict evolved into an all-out civil war, Turkey openly supported the opposition. With no end in sight to the conflict, Ankara nowadays look for alternative solutions in cooperation with Russia and Iran, two key allies of Bashar Assad. In his speech yesterday, President Erdoğan, who hosted leaders of Russia and Iran in Turkey last week, said Turkey would continue its close cooperation with the two countries on resolving the Syria issue.

The chemical attack that drew unprecedented reaction put every major power involved or opposed to the conflict on alert, particularly after U.S. President Donald Trump vented fury at "animal" Assad, in its aftermath. Russia, on the other hand, seeks to rein in reaction. Moscow was set to ask the United Nations Security Council to seek an investigation into the attack, when Daily Sabah went to print. The move by Russia comes hours after Trump described the attack as "atrocious" and promised "some major decisions over the next 24 to 48 hours." Earlier, a French government spokesman said that Paris and Washington were in close contact and would take action if the use of chemical weapons was confirmed. Trump and French President Emmanuel Macron had "exchanged information that a priori confirms the use of chemical weapons," but had ordered further investigations, spokesman Benjamin Griveaux said.

White House spokeswoman Sarah Huckabee Sanders said yesterday that Trump will not attend a planned Summit of the Americas in Peru on Friday to remain in the United States "to oversee the American response to Syria."

British Prime Minister Theresa May said she would talk to U.S. President Donald Trump later yesterday about a suspected chemical attack in Syria. When asked whether Britain would join the United States if Washington decided on further military action in Syria, May declined to answer the question directly but said: "We believe that those responsible should be held to account."

"This attack that took place in Douma is a barbaric attack. Obviously we are working urgently with our allies and partners to assess what has happened on the ground," she said.

Meanwhile, aid groups and local activists have posted graphic online pictures of the victims, including children with foam around their mouths.

The Syrian-American Medical Society (SAMS), an aid group, reported that more than 500 people were brought to medical centers with symptoms indicative of exposure to a chemical agent. The rebels agreed to leave Douma the day after the attack, and were still being evacuated yesterday.

International watchdog Organization For The Prohibition of Chemical Weapons (OPCW) said on Monday that it was working to establish whether chemical weapons had been used in the incident. United Nations Secretary-General Antonio Guterres said yesterday he is outraged by Syria's apparent use of chemical weapons against civilians. If confirmed, the use of such weapons would be a violation of international law, Guterres said in a statement.