No 'final decision' has been made on Syria at national security team meeting: White House 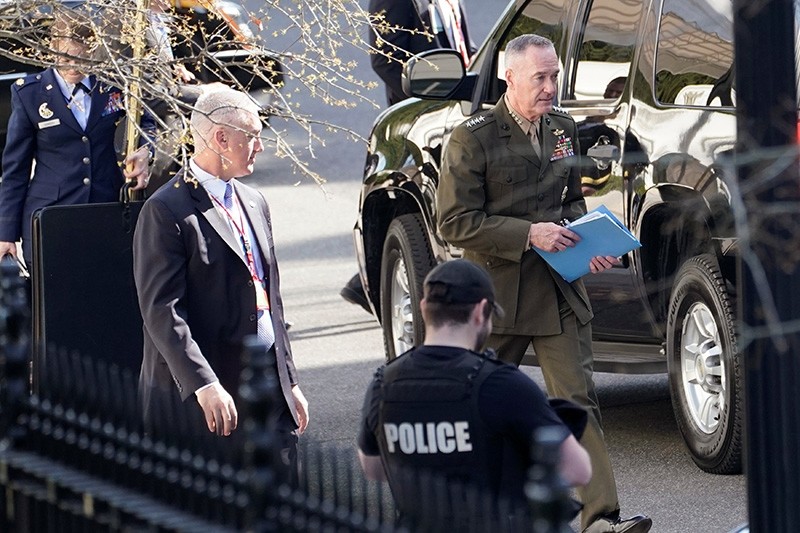 Chairman of the Joint Chiefs of Staff General Joseph Dunford leaves the White House after a meeting with U.S. President Donald Trump about Syria in Washington, U.S., April 12, 2018. (Reuters Photo)
by Daily Sabah with Agencies Apr 12, 2018 12:00 am

U.S. President Donald Trump has not yet made his "final decision" on how to respond to an alleged chemical weapons attack in Syria, the White House said Thursday after he met with his top national security advisors.

"We are continuing to assess intelligence and are engaged in conversation with our partners and allies," White House press secretary Sarah Sanders said.

Trump will confer with French President Emmanuel Macron and British Prime Minister Theresa May later in the day on the action the allies might take, Sanders added.

British government officials said shortly after that May and Trump had spoken and agreed to keep working closely on an international response to the use of chemical weapons in Syria.

The U.S., France and Britain have been in extensive consultations about launching a military strike as early as the end of this week, U.S. officials have said.

The White House announcement came after May held an emergency cabinet meeting on the situation in Syria, where dozens of people were killed last weekend in a suspected toxic gas attack on Douma, the largest town in a former rebel stronghold outside Damascus.

Macron said Thursday that France has proof that the Syrian government launched chlorine gas attacks and said France would not tolerate "regimes that think everything is permitted."

A joint military operation, possibly with France rather than the U.S. in the lead, could send a message of international unity about enforcing the prohibitions on chemical weapons.

A French frigate, British Royal Navy submarines laden with cruise missiles and the USS Donald Cook, an American destroyer equipped with Tomahawk land attack missiles, have all moved into range of Syria's coast.

Defense Secretary Jim Mattis warned such an attack carried the risk of spinning out of control.

However, he also emphasized that Syrian use of chemical weapons should not be tolerated. And he insisted it remains U.S. policy not to be involved directly in Syria's civil war.

"Our strategy remains the same as a year ago," he said. "It is to drive this to a U.N.-brokered peace but, at the same time, keep our foot on the neck of ISIS until we suffocate it," referring to the Daesh terror group.

Mattis' remarks at a House Armed Services Committee hearing followed a series of Trump tweets this week that initially indicated he was committed to bombing Syria but later suggested he was awaiting further advice and assessment. Trump wrote in a Thursday morning tweet that an attack could happen "very soon or not so soon at all."

Moscow has warned against any escalation that could trigger a conflict between the United States and Russia, and has called for an emergency U.N. Security Council meeting on Friday.

U.S. officials have refused to rule out direct military engagement with Russia, with the White House saying "all options are on the table."

But a special hotline for the U.S. and Russian militaries to communicate about operations in Syria is active and being used by both sides, Moscow said Thursday.

Mattis said that although the United States has no hard proof, he believes the Syrian government was responsible for Saturday's attack. Initial reports indicated the use of chlorine gas, possibly in addition to the nerve agent Sarin. Trump's ambassador to the United Nations, Nikki Haley, told NBC News on Thursday the administration has "enough proof" of the chemical attack but was still considering its response.

The Organization for the Prohibition of Chemical Weapons, based in the Netherlands, announced it was sending a fact-finding team to the site of the attack outside Damascus, and it was due to arrive Saturday. It was not clear whether the presence of the investigators could affect the timing of any U.S. military action.

At the House hearing, Democrats grilled Mattis on the wisdom and legality of Trump ordering an attack on Syria without explicit authorization from Congress. Mattis argued it would be justified as an act of self-defense, with 2,000 U.S. ground troops in Syria; he insisted he could not talk about military plans because an attack "is not yet in the offing."

Mattis said he personally believes Syria is guilty of an "inexcusable" use of chemical weapons, while noting that the international fact-finding team would likely fall short of determining who was responsible.

"On a strategic level, it's how do we keep this from escalating out of control, if you get my drift on that," he said.

Rep. Adam Smith, the ranking Democrat on the House Armed Services Committee, said he sees no legal justification for a U.S. strike in Syria, absent explicit authorization by Congress. More broadly, he doubted the wisdom of bombing.

"Until we have a more long-term strategy, until we have some idea where we're going in Syria and the Middle East, it seems unwise, to me, to start launching missiles," said Smith, D-Wash. "We need to know where that's going, what the purpose of it is before we take that act."