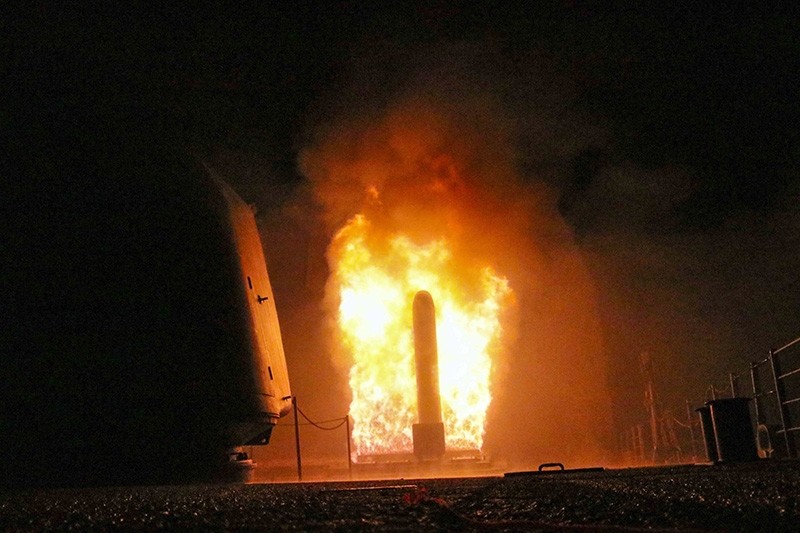 In this image provided by the U.S. Navy, the guided-missile cruiser USS Monterey (CG 61) fires a Tomahawk land attack missile early Saturday, April 14, 2018, as part of the military response to Syria's use of chemical weapons on April 7. (AP Photo)
by Associated Press Apr 14, 2018 12:00 am

The Pentagon says the U.S.-led airstrikes on Syria "successfully hit every target."

Chief Pentagon spokeswoman Dana White said Saturday that the strikes were launched to "cripple Syria's ability to use chemical weapons in the future."

The U.S., France and Britain launched military strikes in Syria on Friday night to punish Bashar Assad for an apparent chemical attack against civilians last week and to deter him from doing it again.

White says the strikes do not "represent a change in U.S. policy or an attempt to depose the Syrian regime." But she says, "We cannot allow such grievous violations of international law."

She also called on Russia to "honor its commitment" to ensure the Assad regime gives up chemical weapons.

None of the missiles fired by the U.S. and its allies was deflected by Syrian air defenses, Lt. Gen. Kenneth McKenzie, the director of the Joint Staff at the Pentagon, said rebutting claims by the Russian government and the Syrian regime.

"None of our aircraft or missiles involved in this operation were successfully engaged by Syrian air defenses." He says there also is no indication that Russian air defense systems were employed early Saturday in Syria.

The Russian military had previously said Syria's Soviet-made air defense systems downed 71 out of 103 cruise missiles launched by the United States and its allies.

McKenzie says 105 weapons were launched against three targets in Syria.

Characterizing the strike as a success, McKenzie says, "As of right now we're not aware of any civilian casualties."