UK hit a specific and limited set of targets in Syria: May 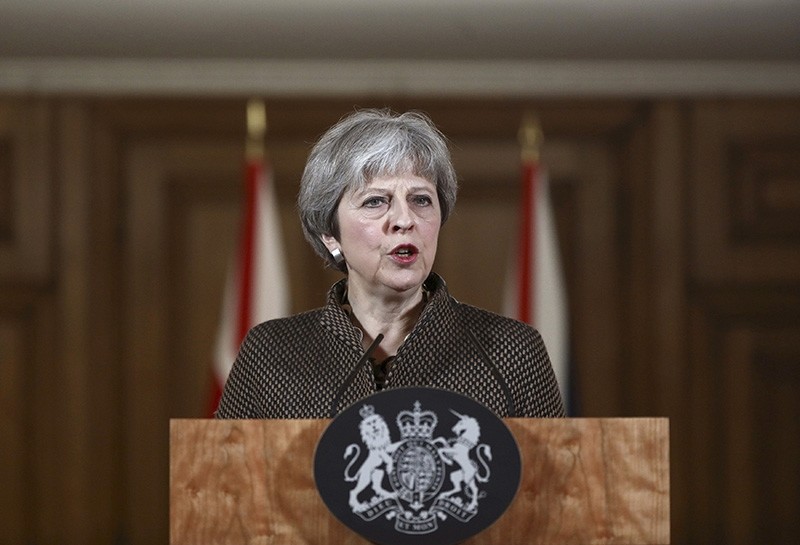 Britain's Prime Minister Theresa May speaks during a press conference at 10 Downing Street in London on the air strikes against Syria, Saturday April 14, 2018. (AP Photo)
by Compiled from Wire Services Apr 14, 2018 12:00 am

British Prime Minister Theresa May said Saturday that the UK is clear that the Assad regime is responsible for Douma chemical attack and confirmed UK hit a specific and limited set of targets in Syria.

"This collective action sends a clear message that the international community will not stand by and tolerate the use of chemical weapons," May said at a press conference, calling the military action "right and legal."

May said the aim was to deter the Syrian regime authorities from further use of chemical weapons and to send a message to the wider world that it was unacceptable to use such weapons.

"It was both right and legal to take military action together with our closest allies to alleviate further humanitarian suffering by degrading the Syrian regime's chemical weapons capability," May said.

She added that she would address parliament on Monday.

May said intelligence and open source accounts indicated that the regime was behind the attack in Douma last Saturday.

"Reliable intelligence indicates that Syrian military officials coordinated what appears to be the use of chlorine in Douma on the 7th April. No other group could have carried this attack," May said. "The opposition does not operate helicopters or use barrel bombs."

She declined to say whether Bashar al-Assad should stay in power and said talks with allies would continue on finding a political solution to the civil war.

"There is a wider question on the future political solution for Syria and that is a matter that we will continue to pursue in diplomatic and political channels with our international partners and allies," May said.

May has repeatedly said that the missile strike on Syria was not about "regime change."