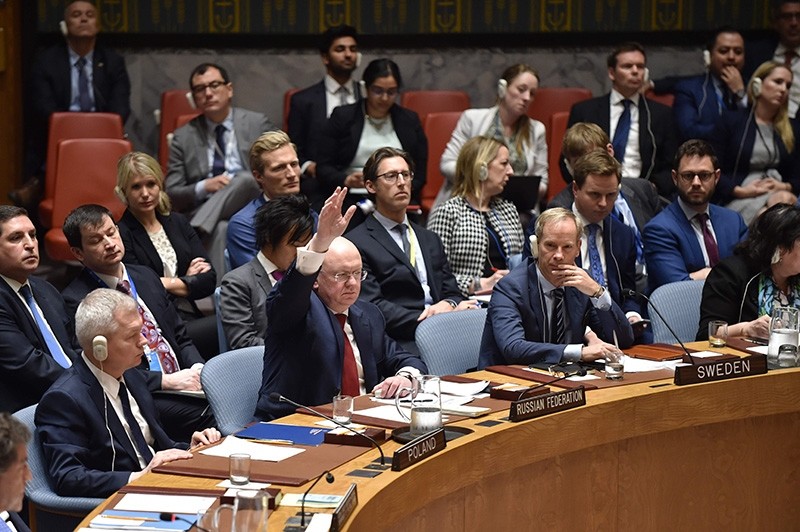 Russian Ambassador to the UN Vasily Nebenzya votes during a UN Security Council meeting at the United Nations Headquarters in New York, on April 14, 2018. (AFP Photo)
by Associated Press Apr 14, 2018 12:00 am

The U.N. Security Council rejected a Russian resolution calling for condemnation of the "aggression" by the United States and its allies against Syria on Saturday.

The vote reflected support for the airstrikes on Syrian chemical sites but it also demonstrated again the paralysis of the U.N.'s most powerful body in dealing with the Syria conflict.

Russia's demand for condemnation and an immediate halt to "aggression" and "any further use of force" by the U.S., Britain and France got support from only two other countries on the 15-member council — China and Bolivia.

The vote came at the end of an emergency meeting of the council called by Moscow, which saw Russia and its supporters clashing with the U.S. and its allies over a suspected poison gas attack last weekend in the Damascus suburb of Douma.

The U.S., Britain and France said they launched airstrikes against Syrian chemical sites after obtaining evidence that poisonous gas was used last weekend on the Damascus suburb of Douma by Bashar Assad's regime. Russia and its close ally Syria called the attack fabricated and said no evidence of chemical weapons use in Douma exists.

Russia's U.N. Ambassador Vassily Nebenzia said after the vote the meeting confirmed that the U.S. and its allies "continue to put international politics and diplomacy in the realm of myth-making — myths invented in London, Paris and Washington." He accused the allies of violating the U.N. Charter and international law.