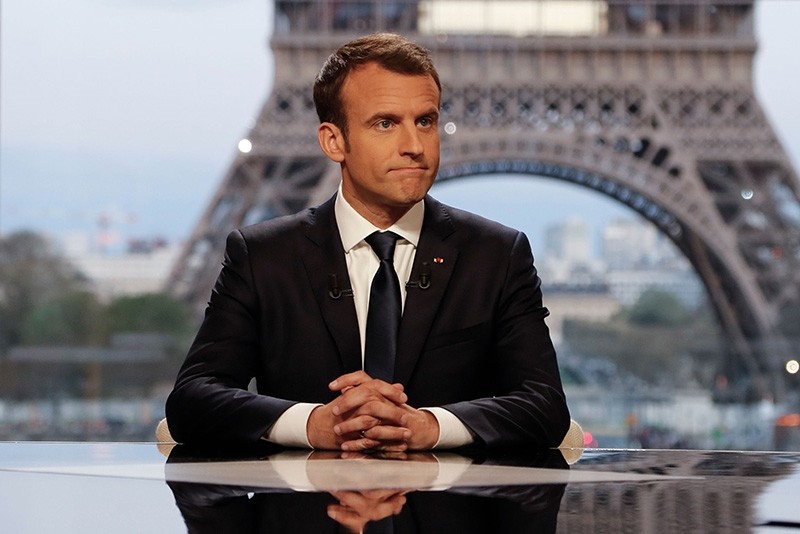 French President Emmanuel Macron (C) poses on the TV set before an interview with RMC-BFM and Mediapart French journalists at the Theatre national de Chaillot in Paris, on April 15, 2018. (AFP Photo)
by Daily Sabah with Agencies Apr 15, 2018 12:00 am

French President Emmanuel Macron said Sunday that France wants to launch a diplomatic initiative over Syria that would include Turkey, Russia and Western powers.

Macron, speaking on French television BFM and online site Mediapart, said "we are preparing a political solution" for Syria, a day after France joined the United States and Britain in launching strikes.

He said the military operation in Syria was legitimate and within the international community framework, and was not a declaration of war.

"We have not declared war on the regime of Bashar al-Assad," Macron said in the interview.

He also said "ten days ago President Trump wanted to withdraw from Syria. We convinced him to remain."

He added that he told Putin that Russia was complicit in the use of chemical weapons by Syria's Assad.

Macron confirmed that he will visit St. Petersburg, Russia, in May.

The U.S., France and Britain launched military strikes in Syria to punish Assad for a suspected chemical attack against civilians and to deter him from doing so again, President Donald Trump announced Friday.

Macron said in a statement that a target of the strike was the Syrian government's "clandestine chemical arsenal."

The U.S.-led operation won broad Western support. The NATO alliance gave its full backing; NATO Secretary-General Jens Stoltenberg said in Brussels that the attack was about ensuring that chemical weapons cannot be used with impunity.

British Prime Minister Theresa May said in London that the West had tried "every possible" diplomatic means to stop Assad from using chemical weapons. "But our efforts have been repeatedly thwarted" by Syria and Russia, she said.

Russia has military forces, including air defenses, in several areas of Syria to support Assad in his long war against anti-government opposition forces.

"So there is no practicable alternative to the use of force to degrade and deter the use of chemical weapons by the Syrian regime," May said. "This is not about intervening in a civil war. It is not about regime change."

Russia and Iran called the use of force by the United States and its French and British allies a "military crime" and "act of aggression." The U.N. Security Council met to debate the strikes, but rejected a Russian resolution calling for condemnation of the "aggression" by the three Western allies.

Trump said the U.S. was prepared to keep up the economic, diplomatic and military pressure on Assad until he ends what Trump called a criminal pattern of killing his own people with internationally banned chemical weapons. That did not mean military strikes would continue. In fact, Gen. Joseph Dunford, chairman of the Joint Chiefs of Staff, said no additional attacks were planned.