Pentagon budget requests equipment for up to 65,000 forces in Syria 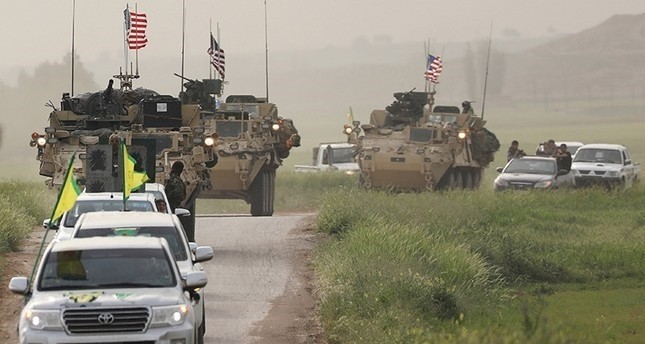 Terrorists from the People's Protection Units (YPG) head a convoy of U.S military vehicles in the town of Darbasiya next to the Turkish border, Syria April 28, 2017. (Reuters Photo)
by Daily Sabah with AA Apr 16, 2018 12:00 am

According to the budget bill that was signed by President Donald Trump and submitted to the U.S. Congress for approval back in February, Pentagon requested $300 million to arm and equip its partners in Syria for the fight against Daesh.

$250 million was also requested for building "border security" in Syria.

"To accomplish U.S. military objectives, partner force generation in Syria will be comprised of local forces that are demographically representative, appropriately vetted, trained, and equipped to ensure a safe and secure environment and capable of countering ISIS [Daesh]," it said in the budget proposal.

According to the proposal, the Pentagon plans to allocate $162.6 million of the $300 million on weapons, equipment, and vehicles, $8 million on base life support which provides basic humanitarian needs, $28 million on transportation and staging costs, and $101.5 million for operational sustainment.

Along with its total of $47 million cost, Pentagon also requested additional $24 million for ammunition of these weapons.

The budget bill was presented to Trump before he said he would "ideally" start to bring home U.S. troops from Syria within a six-month period, and before Turkey and the U.S. held working group meetings to discuss a number of issues, including the stabilization of Manbij, Syria and preventing any undesirable clashes.

The U.S.' Syria policy, especially its military support for the Syrian Democratic Forces (SDF), which is dominated by YPG terrorists, has been a cause of tension between Ankara and Washington.

The U.S. relies on the YPG to fight against Daesh on the ground, while Ankara argues that one terrorist group cannot be used to fight another.