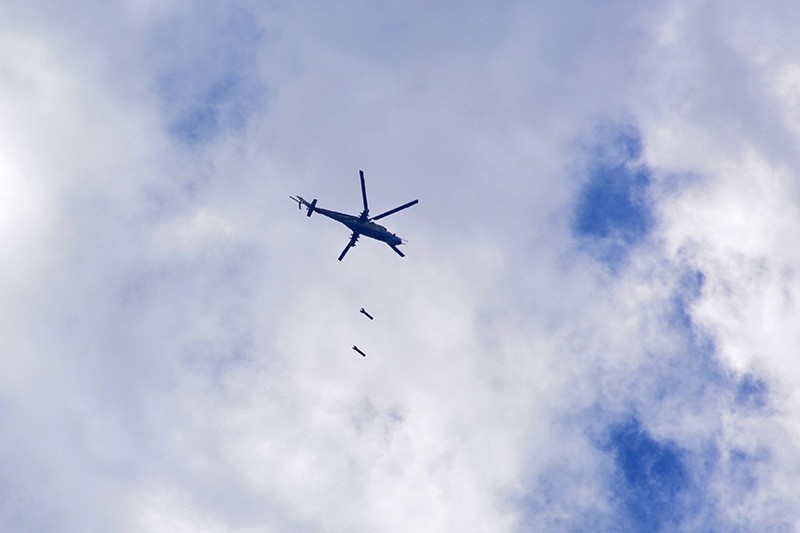 A picture taken on April 22, 2018, shows a Syrian air force Mi 24 helicopter dropping bombsas over the Palestinian camp of Yarmouk, south of the Syrian capital Damascus. (AFP Photo)
by Associated Press Apr 22, 2018 12:00 am

Syrian government forces used warplanes, helicopters and artillery on Sunday to pound districts of the capital held by the Daesh group, in a bid to enforce an evacuation deal reached with the militants earlier in the week.

Two Palestinian refugees, a father and a son, were killed during the fighting at the Yarmouk refugee camp in Damascus, according to the United Nation's Palestinian refugee agency, which added that thousands of homes have been destroyed in four days of fighting.

Hundreds of Daesh militants hold parts of the Yarmouk camp and nearby area of Hajar al-Aswad in southern Damascus. They agreed to give up their last pocket there on Friday but have yet to begin surrendering to government forces and relocating to Daesh-held areas elsewhere in the country.

Residents of Damascus reported hearing loud booms throughout the night and Sunday morning.

UNRWA spokesman Chris Gunnes said that since the start of fighting four days ago, most of the six thousand civilians in Yarmouk camp have been forcibly displaced to the neighboring area of Yalda.

"Most fled their homes with nothing but the clothes on their backs. Their needs are dire. There are reports that people are begging for medicine. Some have spent their first nights in the street," he said in a statement.

Gunnes said added that the camp's last functioning hospital, Palestine Hospital, is now completely unable to operate and called on all sides to allow for the safe evacuation of civilians wishing to leave the area.

President Bashar Assad has escalated his military campaign to retake all remaining enclaves in the capital and surrounding areas. The Daesh-held areas in southern Damascus are the last holdouts, after opposition evacuated the eastern Ghouta suburbs following a fierce government offensive and an alleged poison gas attack in the town of Douma.

The site visit, confirmed by the Organization for the Prohibition of Chemical Weapons, will allow the agency to proceed with an independent investigation to determine what chemicals, if any, were used in the April 7 attack that medical workers said killed more than 40 people. The OPCW mission is not mandated to apportion blame for the attack.

Douma was the final target of the government's sweeping campaign to seize back control of eastern Ghouta from opposition forces after seven years of revolt. Militants gave up the town days after the alleged attack.

The Syrian government and its ally Russia denied responsibility for the suspected chemical attack.

Al-Ikhbariya TV said that 35 buses left the towns of Ruhaiba, Jayroud and al-Nasriya on Saturday carrying hundreds of opposition fighters and their families to opposition-held territory in northern Syria.

The station said the evacuations would continue for three days.

On Sunday, Sweden's Ambassador to the United Nations said that he and other Security Council envoys had agreed to work on a "meaningful mechanism" to work out who was behind the alleged use of chemical weapons in Syria.

The meeting comes just a week after the U.S., France and Britain bombed suspected Syrian chemical weapons facilities, after accusing Assad's government of being behind the attack in Douma.