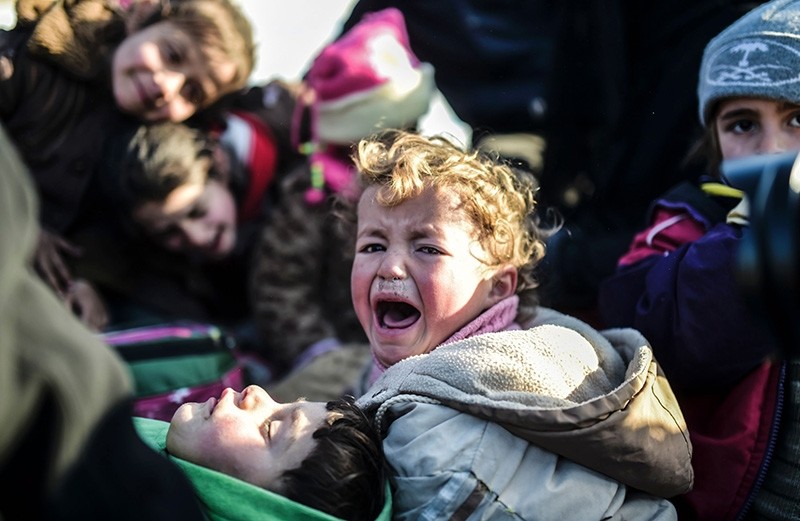 A Syrian child cries as Syrians fleeing the northern embattled city of Aleppo wait on February 5, 2016 in Bab-Al Salam, next to the city of Azaz near Turkish crossing gate in northern Syria. (AFP Photo)
by Apr 24, 2018 12:00 am

The international community should show Syrians that they have not been forgotten, the heads of U.N. agencies said on Tuesday, calling for funding pledges towards a 9.1-billion-dollar appeal to help people inside Syria and in neighboring countries.

The appeal was made in Brussels as a two-day conference co-hosted by the European Union and the United Nations kicked off, bringing more than 80 delegations from countries and global organizations together. The main event will be on Wednesday, when delegates discuss the humanitarian and political situation in Syria.

Donor countries were asked to step up funding to the U.N.'s annual appeal for Syria and the region, after only between 2.3 billion and 2.7 billion dollars have been contributed so far, meaning there is at least a 70-per-cent gap to fill to meet the goal. The appeal was unveiled last December and would be used to help 22 million people.

"Over the next two days we want Syrians to know that they are not forgotten; that we are trying to find better ways to help them in this terrible situation," the UN's head of emergency relief, Mark Lowcock, said in a joint statement by heads of three U.N. agencies.

"We call on donors to pledge funds to assist and protect Syrian families wherever they are. Despite fighting, bombing and violence, we will not give up."

The U.N. is asking for donations as funding requirements to assist people affected by the Syrian conflict continue to increase. However, the appeals are rarely funded in full.

The conference kicked off with a series of events featuring civil society organizations and NGOs.

More than 200 non-governmental organizations were tasked with drawing up concrete recommendations, which will then be discussed by high-level delegations on Wednesday.

"The work with the Syrian civil society for us, the European Union, has been key from the very beginning and is today even more important - both inside Syria and in the rest of the region," said EU foreign policy chief Federica Mogherini.

"What matters is the Syria people for us - they are the ones who pay most of the price of the war and they are the peace builders that everybody should look at as a model."

U.N. special envoy for Syria Staffan de Mistura, who is trying to broker a political deal to end the conflict, hailed Syrian civil society representatives for engaging through dialogue despite not always being in agreement.

"That's exactly what we want at the political level, which has not yet happened," de Mistura said.

On Wednesday, ministerial-level delegations from countries that either have influence in the region, host refugees or are major donors will hold several meetings focusing on the political and humanitarian dimensions of the conflict.

The EU is seeking to revitalize the U.N.-led peace process in a bid to find a political solution to the crisis.

With 13 million people in need of humanitarian assistance inside Syria and 5.6 million Syrians registered as refugees in neighboring countries in the region, the conference is also aiming to mobilize financial assistance.

The EU as a whole and its member states have been the top donors in Syria and the region. Since the conflict broke out in 2011, they have given more than 10.6 billion euros (13 billion dollars) in humanitarian assistance.