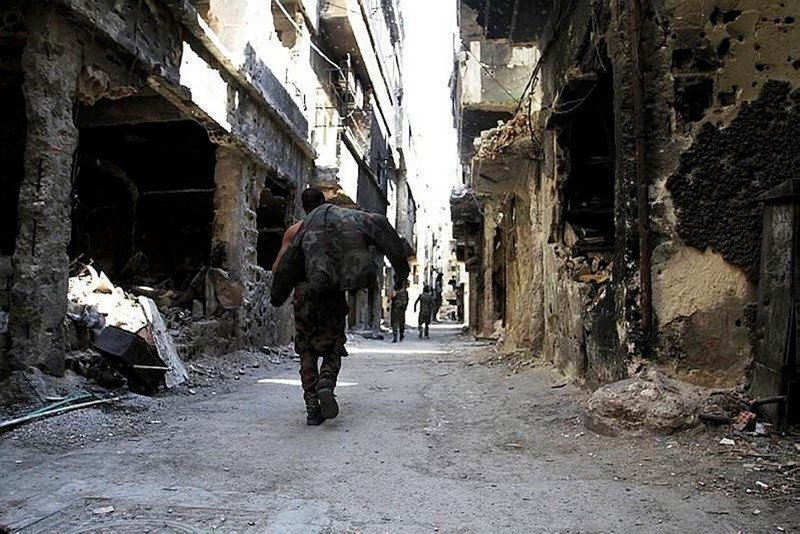 A man walks between damaged buildings in Yarmouk refugee camp located in a Damascus suburb. (File Photo)
by Compiled from Wire Services
May 20, 2018 12:00 am

The Syrian Observatory for Human Rights said a group of Daesh fighters had been evacuated from the last insurgent enclave near Damascus on Sunday in a withdrawal that will restore regime control over the area.

Syrian regime media made no mention of a deal to allow the militants to leave the enclave centered around the Palestinian Yarmouk refugee camp.

The Observatory said buses had entered the enclave after midnight to take out fighters and their families. They had departed in the direction of the Syrian badia, a sparsely populated area to east of the capital.

Previously on Saturday, pro-regime forces and the Daesh group observed a brief ceasefire in southern Damascus, the Observatory said, after weeks of deadly fighting in the terrorists' last stronghold in the Syrian capital.

The regime of Bashar al-Assad last month launched a wide-scale offensive against Daesh in Damascus' Hajar al-Aswad district and the Yarmouk Palestinian refugee camp. Clashes have inflicted heavy losses on both sides.

"A ceasefire came into effect at midday today, ostensibly for five hours," it said.

Observatory head Rami Abdel Rahman told AFP late Saturday that the truce, which may be a prelude to the evacuation of Daesh fighters from the area, was still in effect.

He said the ceasefire had been negotiated by regime ally Russia and pro-regime Palestinian factions.

Loyalist forces launched a ferocious assault in southern Damascus after capturing the Eastern Ghouta rebel stronghold near the capital in April.

They have already retaken the Qadam neighborhood, but the terrorists retain control of around 70 percent of Yarmouk.

According to Observatory, fighting in southern Damascus has killed 484 Daesh members and more than 250 pro-regime fighters as well as 56 civilians.

With the recovery of the Yarmouk enclave, the Syrian government will have crushed the last besieged rebel enclave in western Syria, though swathes of territory at the borders with Turkey, Iraq and Jordan remain outside its control.

Once a thriving district home to some 160,000 Palestinians and Syrians, Yarmouk's population has fallen to just a few hundred people.

Syria's war has left more than 350,000 people dead since it started in 2011 with the brutal repression of anti-government protests, before spiraling into a complex conflict involving world powers and terrorist groups.