Assad says US must leave Syria, vows to use force if negotiations with SDF fail 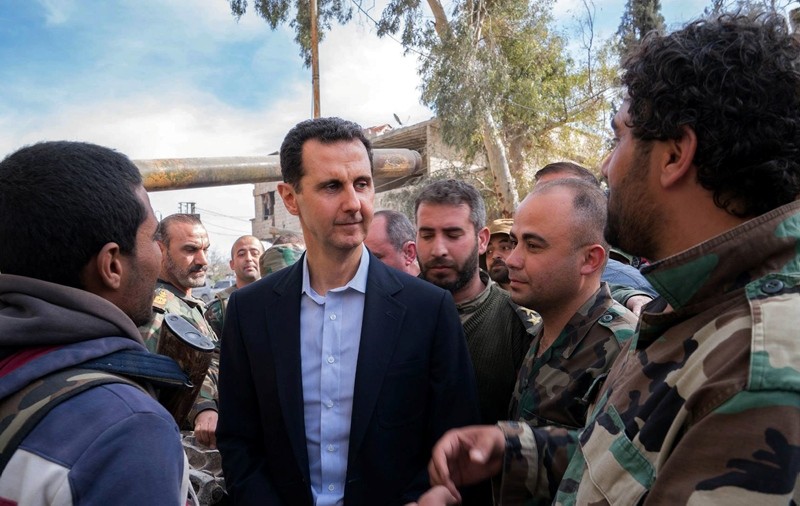 In this file photo released by the official Facebook page of the Syrian Presidency on March 18, 2018, shows Bashar al-Assad (c) talking with regime troops in eastern Ghouta. (AFP Photo)
by Compiled from Wire Services May 31, 2018 12:00 am

Bashar al-Assad said the United States should learn the lesson of Iraq and withdraw from Syria, and promised to recover areas of the country held by U.S.-backed militias through negotiations or force.

"The only problem left in Syria is the SDF," Assad told Russia Today in an interview aired Thursday, referring to the Syrian Democratic Forces, a militia alliance dominated by PKK terrorist group's Syrian offshoot the People Protection Forces (YPG) which is backed by the U.S.

"We're going to deal with it by two options," he said.

"The first one: we started now opening doors for negotiations. Because the majority of them are Syrians, supposedly they like their country, they don't like to be puppets to any foreigners," Assad said.

"We have one option, to live with each other as Syrians. If not, we're going to resort... to liberating those areas by force," he said.

"We don't have any other options, with the Americans or without the Americans. It's our land, it's our right and it's our duty to liberate it, and the Americans should leave. Somehow they're going to leave," he said.

"They came to Iraq with no legal basis, and look what happened to them. They have to learn the lesson. Iraq is no exception, and Syria is no exception. People will not accept foreigners in this region anymore," he said.

The SDF controls some one-third of Syrian territory mostly east and north of the Euphrates River.

Both the SDF and Russian-backed regime troops are engaged in separate operations against Daesh terrorists in eastern Syria, creating a highly volatile situation where de-confliction mechanisms have already been tested several times.

Assad also said that a confrontation between Russia and U.S. forces over Syria was narrowly avoided.

"We were close to have direct conflict between the Russian forces and the American forces," he said.

Responding to U.S. President Donald Trump's description of him as "Animal Assad", the Syrian leader said: "What you say is what you are". Trump called Assad an animal after a suspected poison gas attack on a rebel-held town near Damascus in April.

Assad reiterated the regime's denial that it carried out the attack in the eastern Ghouta town of Douma, saying that the regime did not have chemical weapons and it would not have been in its interest to carry out such a strike.

The Douma attack triggered missile strikes on Syria by the United States, Britain and France which they said targeted Assad's chemical weapons program.

Assad has recovered swathes of Syrian territory with military backing from Russia and Iran and is now militarily unassailable in the conflict that began in 2011.

Large areas however remain outside his control at the borders with Iraq, Turkey and Jordan. These include the SDF-held parts of the north and east, and chunks of territory held by opposition forces in the northwest and southwest.

Israel, which is deeply alarmed by Tehran's influence in Syria, earlier this month said it destroyed dozens of Iranian military sites in Syria, after Iranian forces fired rockets at Israeli-held territory for the first time.

Iran-backed militias including Lebanon's Hezbollah have played a big role in support of Assad during the conflict. Iran's Revolutionary Guards have also deployed in the country.

Assad said Iran's presence in Syria was limited to officers who were assisting the Syrian army. Assad, apparently referring to the May 10 attack, by Israel said "we had tens of Syrian martyrs and wounded soldiers, not a single Iranian" casualty.

Asked if there was anything Syria could do to stop Israeli air strikes, Assad said: "The only option is to improve our air defense, this is the only thing we can do, and we are doing that". He said that Syria's air defenses were now much stronger than before thanks to Russia.