Russia to remain in Syria 'as long as beneficial,' Putin says 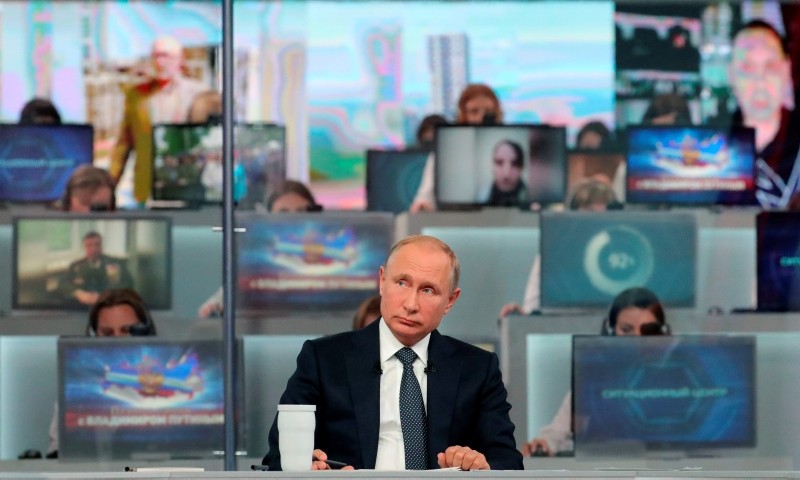 Russian President Vladimir Putin on Thursday said his forces would remain in Syria as long as it was in Moscow's interests, despite earlier announcing Russia's mission in the war-torn country was largely completed.

"Our military is there to ensure Russia's interests in an important region of the world," Putin said in a response to a question during an annual televised phone-in with the Russian public.

"They will stay there as long as it is beneficial to Russia and to ensure our international obligations. We are not planning to withdraw yet," he said.

The president said the continued presence of Russian troops in the country would provide "invaluable experience" in the testing of new Russian weapons.

But he added that large-scale hostilities had ceased and a peaceful settlement was on the agenda.

The Russian president first launched a military intervention in Syria in 2015, turning the tables in the multi-front civil war in favor of ally Bashar al-Assad.

In December last year, Putin made a surprise visit to Russia's Hmeimim airbase in Latakia, Syria where he ordered a partial pullout of the country's troops, saying their mission there was mainly completed.

Putin first said in March 2016 that the country's military campaign in Syria was coming to an end.

In March this year, the defense ministry said a total of 2,954 Russian troops in Syria had voted in presidential polls, giving an idea of current numbers.

Officials and observers also point out the presence of a "shadow army" of Russian mercenaries in Syria, including those working for a private military company called Wagner.