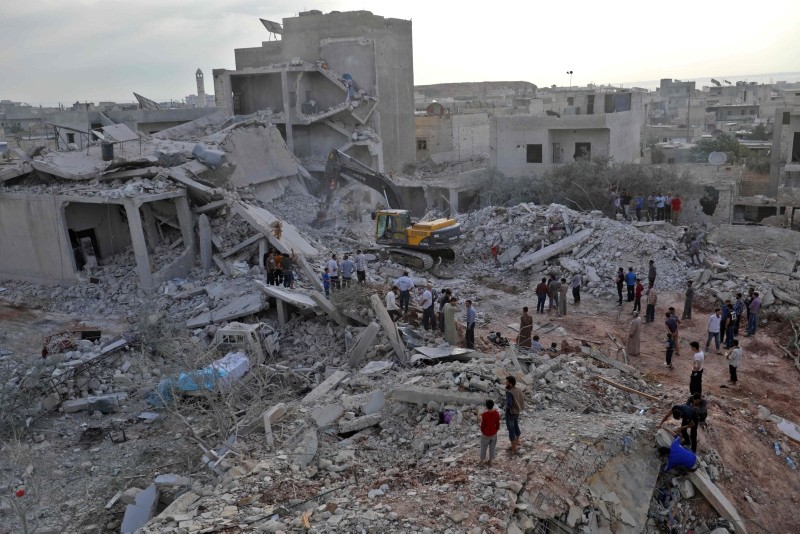 Syrians gather amidst destruction in Zardana, in the rebel-held northern Syrian Idlib province, in the aftermath of following air strikes in the area late on June 8, 2018. (AFP Photo)
by Compiled from Wire Services Jun 08, 2018 12:00 am

Air strikes thought to have been carried out by Russian jets on a rebel-held residential area in northwestern Syria have killed 44 civilians, a Britain-based monitor said Friday.

Six children were among those killed when the strikes hit the area of Zardana in the northwestern Idlib province late Thursday, the Syrian Observatory for Human Rights monitoring group said.

"War planes, which are likely Russian, targeted the village of Zardana in northern rural Idlib overnight and caused the highest death toll in a single attack on the region since late March," Rami Abdulrahman, the director of the Britain-based war monitor said.

The death toll is expected to increase as some of the 50 injured in the strikes were in a critical condition, he said. Rescue workers were still searching under the rubble for survivors.

The Russian defense ministry dismissed the Observatory's reports of strikes on Zardana as having "nothing to do with reality", in a statement carried by the TASS news agency.

The northwestern Idlib region remains the largest populated area of Syria in the hands of groups fighting the Assad regime based in Damascus.

In recent years, tens of thousands of fighters and civilians have fled there from parts of the country which the regime army has recaptured with the help of Russia and Iran. Since Russia intervened on its side in 2015, the Syrian regime has regained control of around half of the country.

Zardana is largely controlled by the opposition fighters, with a small presence of the Hayat Tahrir al-Sham alliance led by Syria's former Al-Qaeda affiliate.

An AFP correspondent at the scene saw volunteers and a crane continue to search the rubble for bodies in the early morning. Half a dozen men in civilian clothes helped carry a person in a black body bag away from the site of the strikes, which pulverized several buildings.

At night, dozens of wounded streamed in to the local hospital, including women, children, the elderly and rescue volunteers, the correspondent said. The twisted bodies of the deceased lay covered in a fine light grey dust and dashed with bright red blood amid the rubble.

More than 350,000 people have been killed in Syria's war since it started in 2011 with the brutal repression of anti-government protests.

The Observatory says it relies on sources inside Syria for its information, and determines who carried out strikes according to flight patterns, as well as planes and ammunition involved.