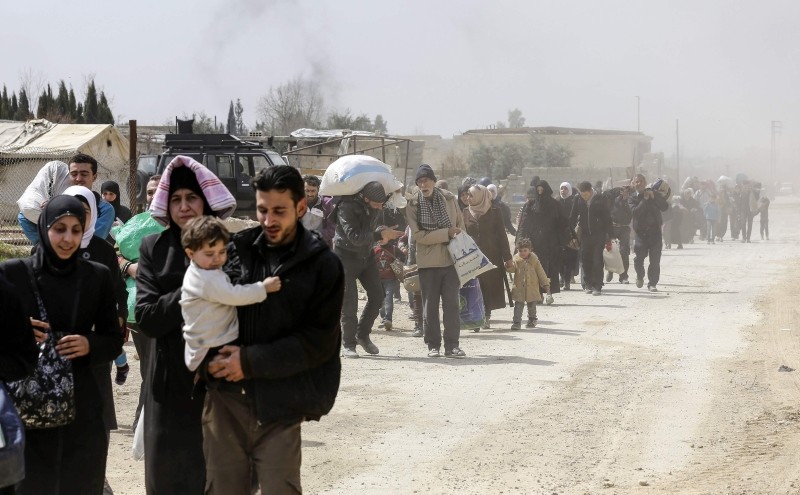 Syrians civilians evacuated from eastern Ghouta pass with belongings through the Assad regime-controlled corridor in Hawsh al-Ashaari, east of the enclave town of Hamouria on the outskirts of the capital Damascus, Syria, March 15, 2018. (AFP Photo)
by Jun 11, 2018 12:00 am

More than 920,000 people were displaced inside Syria during the first four months of 2018, the highest level in the seven-year conflict, the U.N. said Monday.

"We are seeing a massive displacement inside Syria... From January to April, there were over 920,000 newly displaced people," Panos Moumtzis, the U.N. regional humanitarian coordinator for Syria, told reporters in Geneva.

"This was the highest displacement in that short period of time we have seen since the conflict started," he said.

The fresh displacement inside Syria brings the number of people internally displaced in the war-ravaged country to 6.2 million, while there are still some 5.6 million Syrian refugees in neighboring countries, according to U.N. figures.

Moumtzis said most of the newly displaced had been forced on the move by escalations in fighting in the former opposition bastion of eastern Ghouta and within the northwestern province of Idlib, which is almost entirely controlled by various jihadist and hardline rebels.

His comments came after several deadly airstrikes in recent days in Idlib, that have left dozens dead, including children.

He pointed out that Idlib is part of the de-escalation agreement for Syria reached between Turkey, Russia and Iran, and warned of the dire consequences if the province, with its some 2.5 million inhabitants, sinks into full-blown conflict.

More than 350,000 people have been killed in the Syrian war since it started in 2011 with the brutal repression of anti-regime protests.

But Moumtzis said "our worry is that with the Idlib situation, we may not have seen the worst of the crisis in Syria."

He said the world must "make sure that we don't see a similar scenario as we saw in eastern Ghouta," which was recaptured in April by the Assad regime after a blistering two-month offensive.

"We worry about seeing really 2.5 million people becoming displaced more and more towards the border of Turkey," he said.

Following the eastern Ghouta offensive, and the previous offensive to retake Syria's second city Aleppo, opposition and civilians were forcibly evacuated to Idlib.

But for the people of Idlib, "there is no other Idlib to take them out to," Moumtzis pointed out.

"Really, this is the last location. There is no other location to further move them."