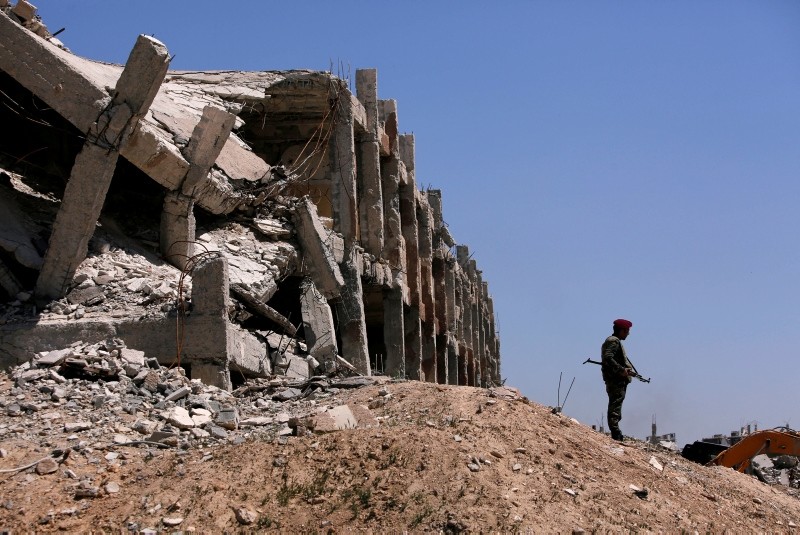 Forces loyal to the Assad regime committed what amounted to crimes against humanity, including deliberately starving civilians, during the siege of eastern Ghouta, U.N. investigators said Wednesday.

The five-year siege, on the outskirts of the Syrian capital, ended in April when the regime regained control of the opposition enclave.

"Following the end of the longest running siege in modern history... the U.N. Commission of Inquiry (for human rights in Syria) has condemned this method of warfare in Syria as barbaric," the U.N. investigators said in a statement.

The COI, tasked by the U.N. Human Rights Council in March to urgently investigate recent events in eastern Ghouta, released a 23-page report filled with horrific details of civilian suffering.

"It is completely abhorrent that besieged civilians were indiscriminately attacked, and systematically denied food and medicine," commission head Paulo Pinheiro said in the statement.

As pro-regime forces dramatically escalated their campaign to recapture the besieged enclave between February and April this year, they used tactics that were "largely unlawful in nature," the report said.

The tactics, it said, "aimed at punishing the inhabitants of eastern Ghouta and forcing the population, collectively, to surrender or starve."

It described thousands of desperate people holed up for months in squalid basements with dwindling food rations and few if any sanitation facilities, as bombs and missiles rained down.

Referring to April 7, when regime air attacks hit the city of Douma, the inquiry said: "The available evidence is largely consistent with the use of chlorine."

Some of the reported symptoms point to the additional use of a different gas, most likely a nerve agent, the investigative body said, without specifying the perpetrators.

The investigators have received reports about at least 49 deaths and up to 650 injuries during the air attacks on April 7.

Inspectors for the Organization for the Prohibition of Chemical Weapons (OPCW) have also investigated the incident, but they have yet to issue a report.

The report concluded that "certain acts perpetrated by pro-Government forces during the siege laid to eastern Ghouta, including the deliberate starvation of the civilian population as a method of warfare, amount to the crime against humanity of inhumane acts causing serious mental and physical suffering."

The investigators slammed the widespread use of sieges throughout Syria's seven-year conflict, which has killed more than 350,000 people.

"Hundreds of thousands of Syrian women, men and children countrywide have suffered for too long the perverse and long-lasting effects of this medieval form of warfare," the report said.

The U.N.'s Syria commission, set up in 2011 shortly after the civil war began, has repeatedly accused the warring parties of crimes.

"Through the entire duration of the siege, armed groups also regularly arbitrarily arrested and tortured civilians in Douma, including members of religious minority groups, repeatedly committing the war crimes of cruel treatment and torture, and outrages upon personal dignity," the report said.

The investigators, who have never been granted access to Syria, said they based their findings for their latest report on some 140 interviews conducted in person in the region and from Geneva.

They also said they analyzed photographs, video recordings, satellite imagery, and medical records, as well as reports from regime and non-regime sources.

The report noted that by the time regime forces declared eastern Ghouta recaptured on April 14, around 140,000 people had been displaced from their homes.

Tens of thousands of them are still being unlawfully interned by regime forces in managed sites throughout the Damascus region, the report said.

Following local "evacuation agreements", up to 50,000 civilians from eastern Ghouta were displaced to Idlib and Aleppo governorates, it said.