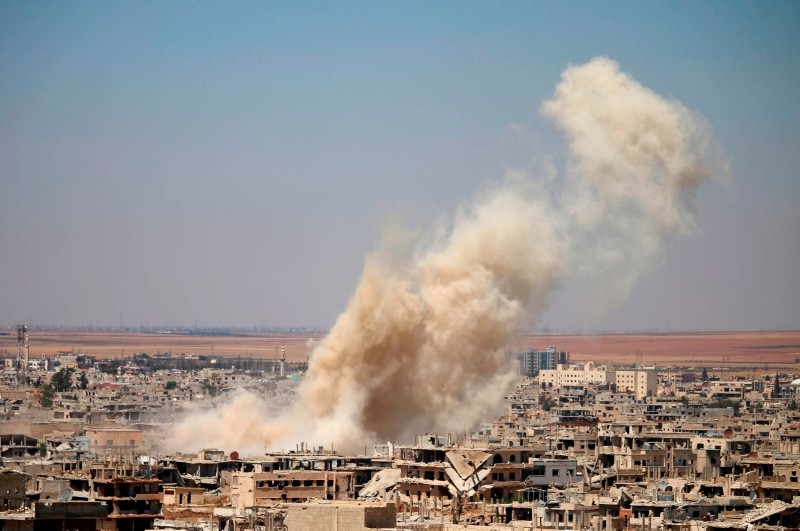 Assad regime troops have made strategic gains from opposition fighters in the south, a monitor said Thursday, as they ramped up an offensive causing yet another wave of mass displacement.

The United Nations said the latest fighting in Daraa province has forced 45,000 civilians to flee, describing it as the largest displacement in the area so far.

Regime forces intensified their offensive in the south last week, the latest phase in a Russian-backed campaign to retake territory lost since the start of the Syrian war seven years ago.

Overnight they recaptured two villages that allowed them to connect two of their front lines and cut off a rebel pocket, the Syrian Observatory for Human Rights said.

"The regime achieved its most significant advance since last Tuesday," the Britain-based monitoring group said.

A military source cited by state television confirmed the army had seized both Basr al-Harir and Mlehat al-Atash.

The Observatory said at least 15 opposition fighters were killed in the latest battle, their bloodiest day since the regime began ratcheting up its operations.

A total of 29 opposition fighters and 24 pro-regime fighters have been killed so far. At least 32 civilians have also lost their lives, the Observatory said.

Opposition forces also control part of the neighboring province of Quneitra. Both provinces abut the armistice line with Israeli forces in the annexed Golan Heights.

The latest push by the regimet and its allies sparked another wave of civilian displacement of the kind that has seen more than half of the Syrian population flee their homes in seven years of conflict.

The U.N. humanitarian coordination office (OCHA) in Syria said at least 45,000 people had fled the area in recent days.

"Over the last couple of days we saw a very large number of people who fled because of the ongoing hostilities, because of the shelling and fighting in that area," spokeswoman Linda Tom said.

"We haven't seen massive displacement in this scale in Daraa," Tom said.

The regime has started bombarding the city of Daraa, the provincial capital which it partly controls, but has focused its ground offensive so far on rural areas in the east.

The U.N. had previously warned that fighting was putting 750,000 people in opposition-held areas of the south in harm's way.

More than five million people have fled abroad since the Syrian conflict erupted in 2011. Another six million are displaced inside the country.

Jordan said on Sunday it could not absorb a new wave of refugees across its border.

The U.N. said it was preparing relief supplies to be sent to the south from both regime-held areas and neighboring countries.

The World Health Organization said it had prepared more than 27 tonnes of medical supplies, including 2,100 trauma treatments, to be sent to Daraa from Damascus "once the green light is received from the Syrian authorities."

The World Food Programme has provided food for 30,000 Syrians, and was readying monthly food rations for half a million people to be trucked in from neighboring Jordan.

Front lines had been relatively quiet for nearly a year under a "de-escalation" deal agreed by Russia, the United States and Jordan in July 2017.

But now, the regime and its Russian allies are pursuing a divide-and-conquer strategy against opposition groups.

To avoid a bloody onslaught, Russia is leading talks with Syria, Jordan, Israel and the U.S. to reach a negotiated settlement.

A regime reconquest of the area looks inevitable and would leave Idlib province in the northwest as the only part of Syria still hosting a significant opposition presence.