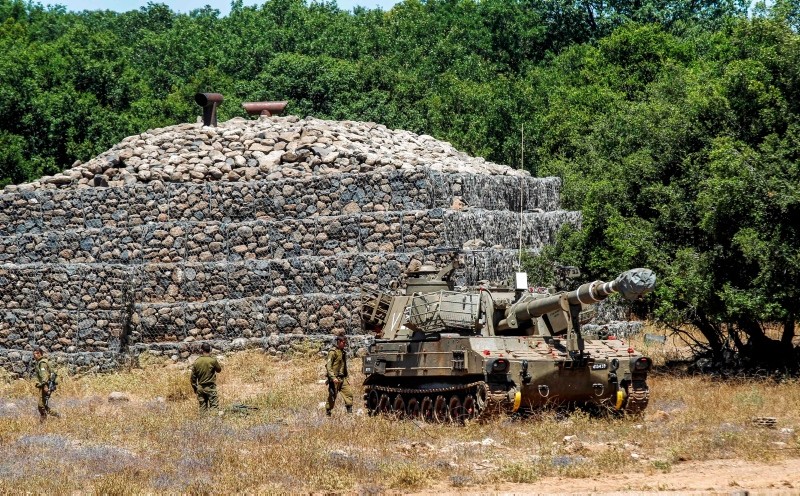 Israeli soldiers walk past a bunker with a mobile artillery piece seen deployed near the border with Syria in the Israeli-occupied Syrian Golan Heights on July 1, 2018. (AFP Photo)
by Compiled from Wire Services
Jul 01, 2018 12:00 am

Israel beefed up its tank and artillery deployment on the Golan Heights frontier with Syria on Sunday, cautioning Assad regime forces to keep a distance as they sweep opposition-held areas over the border.

Israel's military deployed tank and artillery reinforcements to the Golan on Sunday, a statement said, "in light of developments on the Syrian Golan Heights".

In its statement the military said Israel was holding to its non-intervention policy.

Israel says it is neutral in the seven-year war but has carried out scores of air strikes in Syria on suspected Iranian targets, Lebanese Hezbollah guerrillas or in response to what it said were attacks directed against its own forces in the Golan.

Addressing the Israeli cabinet, Prime Minister Benjamin Netanyahu said Israel had apprised Russia and the United States of its position on the developments in the Golan, alluding to a separation of forces agreement with Syria after the 1973 Middle East war that created a buffer zone patrolled by the U.N. Disengagement and Observer Force (UNDOF).

"We will continue protecting our borders, we will provide humanitarian aid to the full extent possible, we will not allow entry into our territory and we will demand strict adherence to the 1974 disengagement deals with the Syrian army," he said.

Israel seized much of the Golan from Syria in the 1967 war and annexed the strategic plateau in 1981, a move not recognized abroad.

Citing the Syrian instability, Israel has sought U.S. endorsement for its claim of sovereignty over the Golan. A senior Netanyahu cabinet minister said in May the Trump administration could soon oblige. Washington has not commented on the matter.

A report in March on UNDOF activities said Syria's armed forces maintained positions in the Golan which violated the accord, as did Israel's deployment to the area of 155 mm artillery, Iron Dome anti-missile systems and related equipment.

Since 2016, Israeli forces have provided humanitarian aid to Syrian villagers and internally displaced refugees across the Golan in a bid to keep the frontier quiet. The military says it has stepped up aid in recent days as people fleeing Syria have been arriving at a clip of hundreds a day and now number in the thousands.

An Israeli army officer in charge of humanitarian efforts on the Golan said on Sunday that several thousand Syrians displaced by the Deraa fighting had sought refuge in villages and tent camps set up by international relief workers on the frontier.

"I imagine that (they) assume that they are far less likely to get shelled. I imagine that they do not see what happened to them in Deraa or in Aleppo or in the Damascus suburbs happening to them close to the Israeli border," the officer, a lieutenant-colonel who declined to be named, told Reuters.

Asked how Israel might respond if the Syrian army were to carry out strikes near the border, the Israeli officer described such a scenario as unlikely. "I imagine that, in such a situation, our commanders would assess the incident and decide on an appropriate response," he said.

The United Nations has warned of a catastrophe in southern Syria, where fighting has forced around 160,000 people to flee toward the Israeli-occupied Golan Heights and the Jordanian border.

These include around 20,000 to areas near the Naseeb border crossing with Jordan, a country that already hosts more than 650,000 registered Syrian refugees and says the actual figure is closer to 1.3 million.

Amman has said it cannot open its frontier to any more Syrians fleeing the seven-year conflict, but on Saturday announced it had sent aid across the border to the displaced.

The Israeli military said it took in six Syrians, including four young children, over the weekend for emergency medical treatment after their families were killed. It has supplied 300 tents and about 60 tons of food, clothing, humanitarian aid and medicine to thousands of internally displaced Syrians who fled heavy bombardment by Syrian government forces.

"The picture has changed over the past week and half," said the commander of "Operation Good Neighbor," the Israeli program to aid Syrians. "These are people who fled their homes with nothing ... we realized we had to do something different."

The officer could not be identified according to military protocol. Since the operation started two years ago, the military says it has delivered more than 1,500 tons of food, 250 tons of clothing and nearly a million liters of fuel.

The military says it will continue to aid those in need but won't allow a massive influx of refugees into the country.