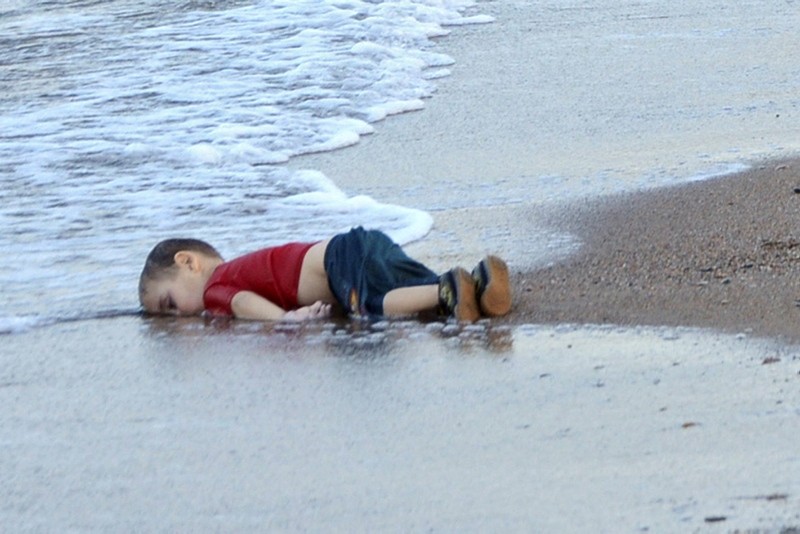 The washed up body of Aylan Kurdi, a refugee child who drowned during a failed attempt to sail to the Greek island of Kos, at the shore in the coastal town of Bodrum, Turkey. (EPA Photo)
by daily sabah
Jul 04, 2018 12:00 am

Two Italian nongovernmental organizations on Tuesday made a global call for people to wear red shirts on Saturday to remind everyone about the plight of refugees all around the globe.

The call was made by Gruppo Abele and Libera, both NGOs founded by Italian priest Luigi Ciotti who is known for his fight against organized crime such as the Mafia.

Ciotti published the call on Gruppo Abele's website, under the title "Wear a red shirt to stop the mankind's bleeding wound."

According to Ciotti, the color red was chosen specifically as it was worn by three–year-old Aylan Kurdi who washed upon the shores of Bodrum in Turkey after drowning during his journey with his parents from war-torn Syria to Europe.

The photo of Aylan with his red shirt became a symbol of the global immigration crisis and a reminder of how dire the situation was.

"This photo of Aylan touched and ashamed everyone around the globe. Three children who also drowned off the coast of Libya were wearing red," wrote Ciotti in the announcement.

"Let's stop for a day and wear red shirts for a single day, just like those children who are mankind's legacy."

Ciotti added that modern Europe is all about freedom and equality.

His comments come at a time Italy has drawn ire for denying entry to several NGO ships carrying hundreds of refugees, causing them to get stranded at sea. Italy and Malta denied port to such vessels on two separate occasions, but Spain offered to take in the dejected rescue boats.

Italian Interior Minister Matteo Salvini's decision to deny migrant boats from docking in Italy sparked a heated debate between EU countries on how to handle the waves of migrants.