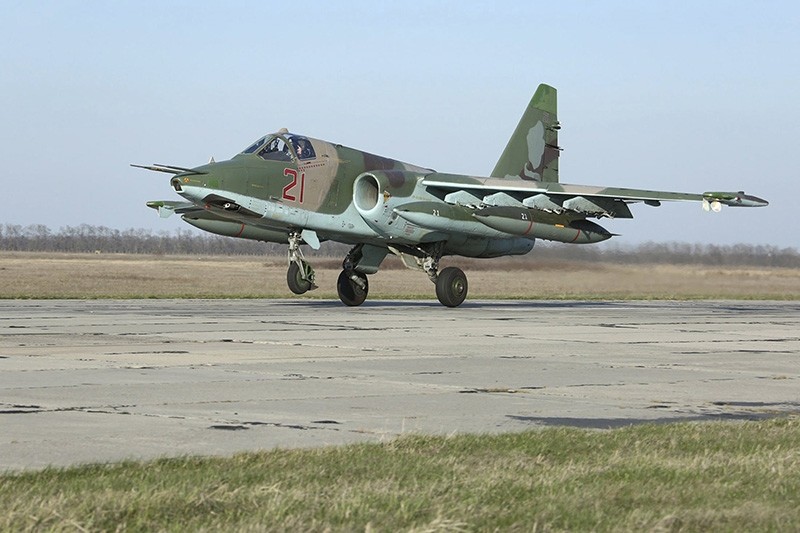 A Russian Sukhoi Su-25 fighter jet arriving from Syria lands at an airbase in Krasnodar region, southern Russia, in this March 16, 2016 handout photo by the Russian Ministry of Defense. (Reuters Photo)
by Compiled from Wire Services Sep 04, 2018 12:00 am

Russian warplanes on Tuesday resumed airstrikes on Syria's northwestern Idlib province after a 22-day break, according to the Syrian Observatory for Human Rights.

An opposition source and the Observatory both said the air strikes were in the countryside near Jisr al-Shughour on the western edge of the opposition's northwestern territory.

Russian air raids ceased in and around Idlib on Aug. 15, but pro-regime forces have maintained an aerial bombardment and shelling there, the war monitor said.

Assad has sworn to recapture every inch of Syria and has made big gains against the opposition since Russia joined his war effort in 2015.

The Assad regime has been preparing for a full-scale military operation, amassing its forces around the last opposition bastion in Idlib near the Turkish border.

The Kremlin said Tuesday that the regime's army is getting ready to solve the problem of "terrorism" in Idlib.

"We know that the Syrian armed forces are getting ready to solve this problem," President Vladimir Putin's spokesman Dmitry Peskov said, calling Idlib a "pocket of terrorism." He did not release a timeframe however.

He also claimed the opposition forces in Idlib block the Syrian peace process and threaten Russian military bases in the country.

Russian Foreign Minister Sergei Lavrov said Monday that the Assad regime has every right to liquidate terrorists in Idlib.

He said it is not possible to tolerate the situation there indefinitely, according to Interfax.

Turkey has been working with Iran and Russia to find a peaceful solution to the Idlib crisis, warning that a full-scale operation on the province would result in a humanitarian disaster.

President Recep Tayyip Erdoğan will travel to Tehran for a trilateral meeting with his Iranian and Russian counterparts on Friday.