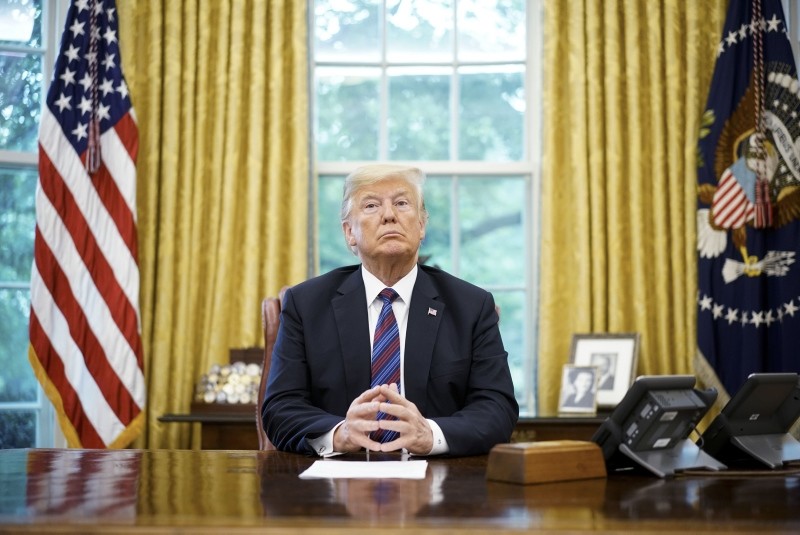 In this file photo taken on August 27, 2018, US President Donald Trump listens during a phone conversation with Mexico's President Enrique Pena Nieto on trade in the Oval Office of the White House in Washington, DC. (AFP Photo)
by Compiled from Wire Services Sep 04, 2018 12:00 am

The White House warned on Tuesday that the United States and its allies would respond "swiftly and appropriately" if Syria's Bashar Assad used chemical weapons again.

White House spokeswoman Sarah Sanders said the United States is closely monitoring the situation in Idlib province and that Trump has warned an attack there would be a reckless escalation of an already tragic conflict and would risk the lives of hundreds of thousands of people. Syrian regime forces are expected to mount an offensive in Idlib that could spark a humanitarian disaster.

"Let us be clear, it remains our firm stance that if Bashar Assad chooses to again use chemical weapons, the United States and its allies will respond swiftly and appropriately," she said.

She said the United States will work with its allies to find a lasting diplomatic solution to resolve the hostilities in Syria under the auspices of United Nations Security Council Resolution 2254.

Trump in the past year and a half has twice ordered U.S.-led airstrikes against targets in Syria in response to what Washington called the Assad regime's use of chemical weapons against civilians.

In a tweet on Monday, Trump warned Assad and his allies Iran and Russia not to "recklessly attack" Idlib province and warned that hundreds of thousands of people could be killed.

The Kremlin on Tuesday dismissed Trump's warning to Syria not to launch an offensive in Idlib, saying the area was a "nest of terrorism."

The northern province and surrounding areas are the last major enclave held by opposition forces fighting Assad, who has been backed by both Russian and Iranian forces in Syria's seven-year-old civil war. They are home to some three million civilians.