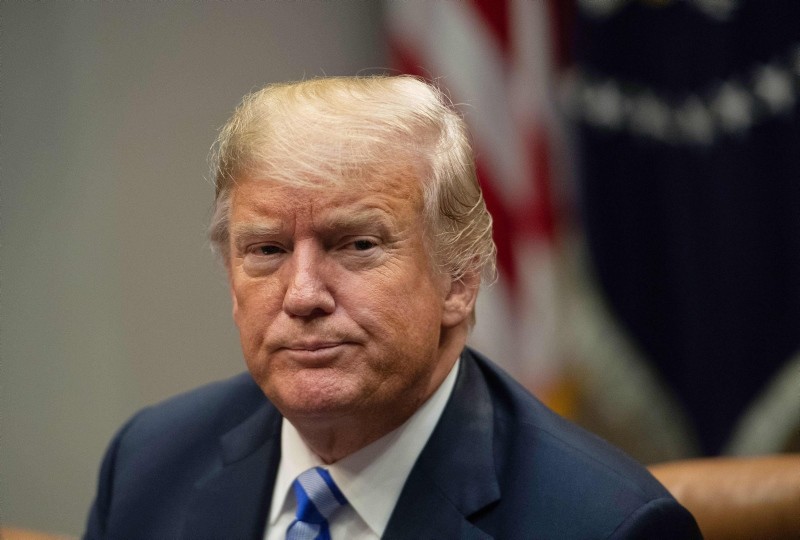 U.S. President Donald Trump speaks to the press before a meeting with Republican Congressional leaders at the White House in Washington, DC, on September 5, 2018. (AFP Photo)
by Anadolu Agency Sep 05, 2018 12:00 am

U.S. President Donald Trump on Wednesday denied claims in a forthcoming book that he sought the assassination of Bashar Assad, and his top officials after a deadly chemical attack.

During a brief photo opportunity with Kuwaiti Emir Sabah al-Ahmad al-Jaber al-Sabah, Trump said the proposal was "never even discussed" after details of Bob Woodward's "Fear: Trump in the White House" were published Tuesday by the Washington Post.

"That was never even contemplated, nor would it be contemplated and should not have been written about in the book. It's just more fiction," said Trump.

Woodward, the longtime Post investigative journalist, reported that following an April 2017 chemical attack blamed on the Syrian regime, Trump called on Defense Secretary James Mattis to come up with plans to kill Assad and his top cadre.

But after Mattis told him he would quickly draw up the plans, he told a senior aide: "We're not going to do any of that. We're going to be much more measured."

Mattis later issued a statement disputing the book as "a product of someone's rich imagination."

Trump has repeatedly lashed out at Woodward's book, which is set to be released next week, suggesting in a series of tweets on Wednesday the U.S. should change its laws to make it easier sue for libel.

"Isn't it a shame that someone can write an article or book, totally make up stories and form a picture of a person that is literally the exact opposite of the fact, and get away with it without retribution or cost," he said. "Don't know why Washington politicians don't change libel laws?"

But the book appears to be corroborated at least in part by an anonymous New York Times op-ed in which the author, who is described as a senior Trump administration official, acknowledges he or she is part of a group "working diligently from within to frustrate parts of his agenda and his worst inclinations."

The author was referring to Trump.

"We believe our first duty is to this country, and the president continues to act in a manner that is detrimental to the health of our republic," the official wrote. "That is why many Trump appointees have vowed to do what we can to preserve our democratic institutions while thwarting Mr. Trump's more misguided impulses until he is out of office."

The Times kept the official's identity anonymous, but said it knows who he or she is.

Amid a looming offensive on the northwestern Syrian city of Idlib, Trump warned during his meeting with al-Sabah that the regime, Iran and Russia "they will hopefully be very, very judicious and careful. Because the world is watching. That cannot be a slaughter."