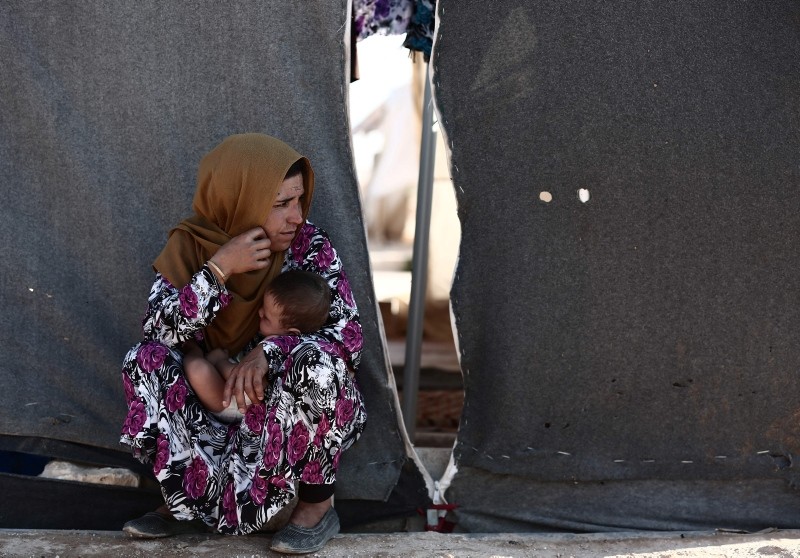 A woman carries a child as she sits in front of a tent at a camp for the displaced from the opposition-held Syrian province of Idlib, at the village of al-Ghadfa, southeast of the province on September 2, 2018. (AFP Photo)
by Sep 06, 2018 12:00 am

Around 1,000 people have fled Syria's province of Idlib, the last major opposition stronghold in the war-devastated country, in anticipation of a regime offensive, a monitoring group said on Thursday.

The Syrian Observatory for Human Rights added that the people started leaving their homes in the rural part of Idlib in north-western Syria on Wednesday night for the neighboring western countryside of Aleppo, the northern region of Afrin and areas close to the Turkish border.

Idlib's inhabitants are worried that talks between Iran, Turkey and Russia due to start in Tehran on Friday, may fail to bring a political solution to Idlib, the watchdog's head, Rami Abdul-Rahman, said.

Abu Hamdo, who is a member of the rescue team White Helmets, said that one center of the group had been knocked out of service as a result of one strike.

"The White Helmets' center in al-Tamana'a [in rural Khan Sheikhoun] was totally destroyed and went out of service. Luckily, there were no casualties," he told dpa.

Turkey, a main backer of the Syrian opposition, has for weeks been engaged in diplomatic efforts to prevent a regime attack on Idlib along its border.

Russian and Iran are key allies of Syria's Bashar al-Assad whose forces have made territorial gains against Western-backed opposition fighters in recent months.

Idlib is largely controlled by Hayat Tahrir al-Sham, a network led by an al-Qaeda-affiliated group.

Last week, the U.N. special envoy to Syria, Staffan de Mistura, warned that the presence of 10,000 al-Qaeda-linked fighters in Idlib does not justify an attack that could endanger the lives of 2.9 million civilians there.

During the last three years, thousands of rebels and their families have been evacuated from different parts of Syria to Idlib under agreements with the government.