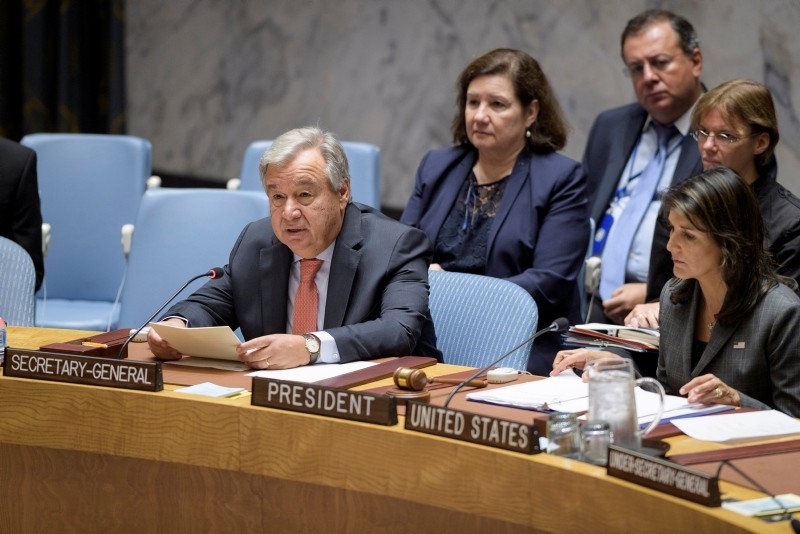 In this photo provided by the United Nations, UN Secretary-General Antu00f3nio Guterres, left, delivers remarks Monday, Sept. 10, 2018, at a Security Council meeting on maintenance of international peace and security. (AP Photo)
by Sep 11, 2018 12:00 am

United Nations Secretary-General Antonio Guterres on Tuesday appealed to Russia, Iran and Turkey to "spare no effort to find solutions that protect civilians" in Syria's Idlib and said it was "absolutely essential" a full-scale battle was avoided.

"This would unleash a humanitarian nightmare unlike any seen in the blood-soaked Syrian conflict," he told reporters.

An estimated 3 million people live in Idlib - the last major stronghold of active opposition to Bashar al-Assad. The U.N. has described it as a "dumping ground" for people evacuated and displaced from elsewhere in Syria during the seven-year war.

Assad has vowed to retake the region, backed by his Russian and Iranian allies. Regime and Russian warplanes began air strikes in Idlib last week in a possible prelude to a full-scale offensive. They say they are targeting terrorist groups.

"I understand that the present situation in Idlib is not sustainable and the presence of terrorist groups cannot be tolerated. But fighting terrorism does not absolve warring parties of their core obligations under international law," said Guterres.

Russia briefed the 15-member U.N. Security Council on Tuesday on the Tehran meeting, which was held as part of the Astana process.

"Russia, Iran and Assad are demolishing Idlib and asking us to call it peace. But here's the reality: Astana has failed. It has failed to stop the violence or to promote a political solution," U.S. Ambassador to the U.N. Nikki Haley said.