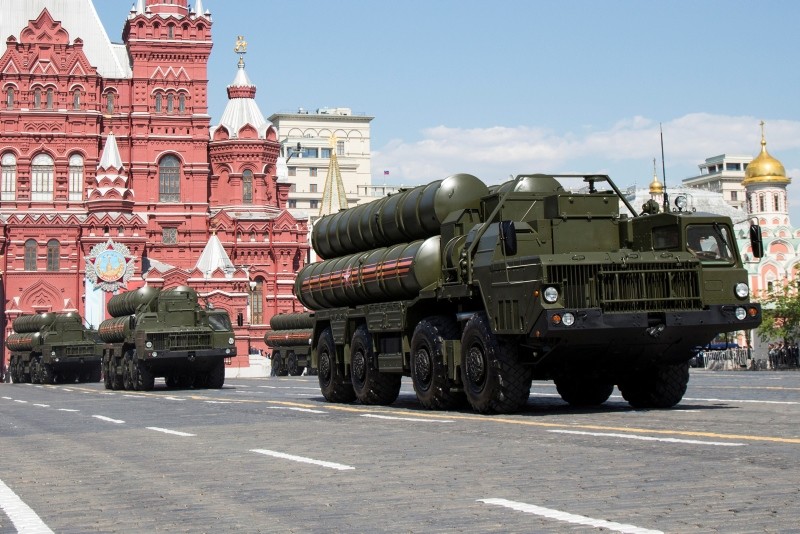 In this file photo taken on Monday, May 9, 2016, Russian the S-300 air defense missile systems drive during the Victory Day military parade marking 71 years after the victory in WWII in Red Square in Moscow, Russia. (AP Photo)
by Compiled from Wire Services Sep 24, 2018 12:00 am

Defying Israel’s lobbying efforts, Russia announced it will supply the Syrian regime with the more modern, S-300 missile defense systems after last week’s downing of a Russian plane in Syria

Russian Defense Minister Sergei Shoigu said on Monday that Moscow will supply an S-300 anti-missile system to the Assad regime within two weeks.

The announcement comes a week after the ministry accused Israel of indirectly causing the downing of a Russian military plane in Syria that killed 15 servicemen.

Shoigu said the supply of S-300s to Syria will "calm down some hotheads" whose actions "pose a threat to our troops."

Earlier in the war, Russia suspended a supply of S-300, which Israel feared Syria could use against it.

Shoigu said Russia is now going to go ahead with the shipment because "the situation has changed, and it's not our fault." The supply of S-300s to Syria will "calm down some hotheads" whose actions "pose a threat to our troops," he said.

Russian Deputy Foreign Minister Mikhail Bogdanov told Russian news agencies that supplying S-300 to Syria is Russia's "own right" and expressed confidence that this would not hurt Russia's ties with Israel.

The Kremlin said Russia's decision was not targeted against anyone and only serves to protect Russian troops in Syria. Spokesman Dmitry Peskov told reporters that recent findings by the Russian military showed an Israeli jet "deliberately" pushed the Russian Il-20 into the line of fire, enabling its downing.

Russia's stepped-up role in Syria enabled Assad's forces, which had been losing ground to the armed opposition, to gain the upper hand in the war and reclaim wide swaths of territory held by the opposition.

Shortly after Moscow's announcement, Assad's office said he received a call from Vladimir Putin and that the two discussed the latest developments, including the Idlib deal and the delivery of S-300s.

According to the statement, Putin reiterated that Russia holds Israel responsible for the downing of the Russian plane. The Russian president also informed Assad of the S-300 delivery, it said.

Assad expressed his condolences for the deaths of the Russian airmen, saying they were "carrying out noble mission, fighting terrorism in Syria."

Russia in April had hinted that it would supply the S-300 to Assad's regime despite Israeli objections. The missile system, originally developed by the Soviet military, but since has been modernized and is available in several versions with different capabilities, fires missiles from trucks and is designed to shoot down military aircraft and short to medium-range ballistic missiles.

For several years, Israel and Russia have maintained a special hotline to prevent their air forces from clashing in the skies over Syria. Russia has provided key air support to Bashar Assad's forces since 2015, while Israel has carried out dozens of strikes against Iran-linked forces. Israeli military officials have previously praised the hotline's effectiveness.

But, the Russian Defense Ministry on Sunday accused Israel of using the hotline to mislead Russia about its plans. He said the Russians were unable to get the II-20 to a safe place because an Israeli duty officer had misled them, telling them of an Israeli operation in northern Syria while the jets were actually in Latakia, in the country's west.

The downing of the plane came just hours after Russia announced it had reached a deal with Turkey to avert a Russian-backed Syrian regime offensive against the northwestern province of Idlib, one of the last areas still in opposition hands.