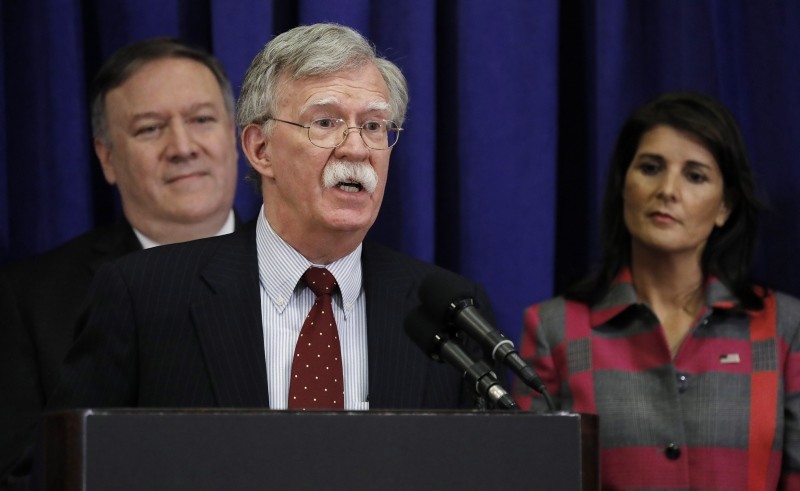 The Trump administration is warning Russia that supplying Syria with an advanced missile defense system would be a "major mistake" and should be reconsidered. It also says U.S. forces will not leave Syria until Iran leaves.

National security adviser John Bolton said Monday that delivery of the Russian S-300 would be a "significant escalation" in already high tensions in the region and Secretary of State Mike Pompeo said he would raise the matter this week with his Russian counterpart Sergey Lavrov at the U.N. General Assembly.

"We think introducing the S-300s to the Syrian government would be a significant escalation by the Russians and something that we hope, if these press reports are accurate, they would reconsider," Bolton said.

Russia announced earlier Monday that it would give Syria's government more modern, S-300 missile defense systems after last week's downing of a Russian plane by Syria in a friendly fire incident. The military's reconnaissance Il-20 was shot down by the Syrian government missile defense systems responding to an Israeli airstrike. Russia laid the blame on Israel, saying Israeli fighter jets had pushed the plane into Syria's line of fire.

"We have American forces in the area we're concerned about," Bolton said. "The Israelis have a legitimate right to self-defense against this Iranian aggressive behavior, and what we're all trying to do is reduce tensions, reduce the possibility of major new hostilities. That's why the president has spoken to this issue and why we would regard introducing the S300 as a . major mistake."

Syria's skies, where regional and international powers back different parties in the conflict, are increasingly crowded.

Shortly before the downing, Israeli strikes had hit targets inside Syria, reportedly preventing an arms shipment to the Iranian-backed militant Hezbollah group.

Russia launched its campaign in Syria to support Bashar Assad regime in 2015, and though the involvement turned the tide of war in favor of Assad forces, Moscow has tried to play a careful balancing act, maintaining good ties both with Iran and Israel. For its part, Israel is wary of Iran's growing influence in Syria.

Bolton said the U.S. would keep a military presence in Syria until Iran is no longer active there.

"We're not going to leave as long as Iranian troops are outside Iranian borders and that includes Iranian proxies and militias," he said.

Asked about Bolton's statement that U.S. troops will stay in Syria as long as Iran forces and proxies are there, Defense Secretary Jim Mattis told reporters at the Pentagon, "Right now our troops inside Syria are there for one purpose, and that's under the U.N. authorization about defeating Daesh." He said this includes training local Syrian forces to prevent an Daesh comeback.

Mattis did not explicitly support or dispute Bolton's statement, although his description of the role and mission of U.S. troops in Syria did not include outlasting Iran.

Pressed to say whether he agreed with Bolton's statement, Mattis said, "I'll let Ambassador Bolton speak for himself," but added later that he had spoken to Bolton twice Monday. "I think we're on the same sheet of music," which he said means supporting U.N.-brokered efforts to reach a political settlement. "There is no daylight between his appreciation of the situation and mine."