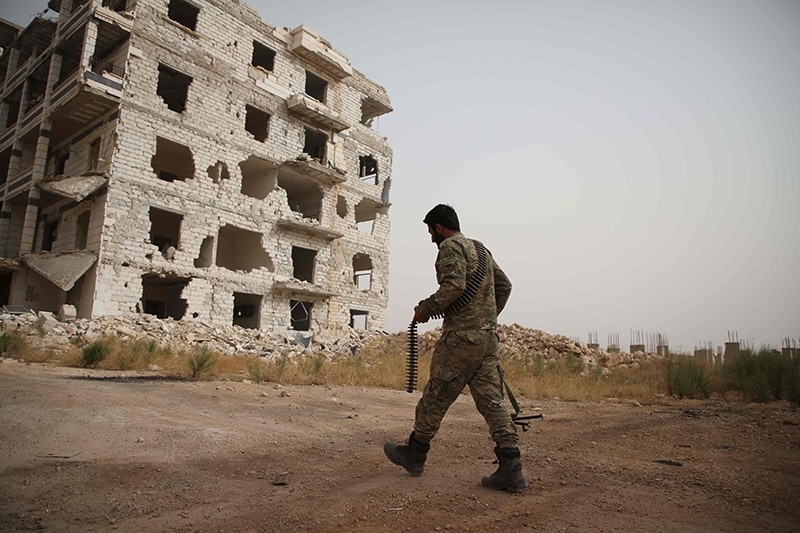 A Syrian opposition-fighter from the National Liberation Front (NLF) walks in a street in the opposition-held al-Rashidin district of western Aleppo's countryside near Idlib province, on Oct. 15, 2018. (AFP Photo)
by Daily Sabah with Agencies
Oct 16, 2018 12:00 am

The Kremlin on Tuesday said a deal to create a buffer in Syria's Idlib was going ahead, despite extremists missing a deadline to leave the zone the day before.

"According to the information we are receiving from our military, the memorandum is being implemented and the military are satisfied with the way the Turkish side is working," Kremlin spokesman Dmitry Peskov said of the Turkish-Russian deal.

Moscow supports the Syrian regime while Ankara backs the moderate opposition in the conflict.

"Of course one cannot expect everything to go smoothly with absolutely no glitches, but the work is being carried out," Peskov said.

Turkey and Russia struck a deal in the Russian town of Sochi on Sept. 17 to avoid an Assad regime offensive on the last major opposition stronghold in Syria, setting up a demilitarized zone that was supposed to be evacuated of all heavy weapons and all extremist groups by Monday, Oct. 15. Opposition groups in Idlib will remain in areas where they are already present, while Russia and Turkey will carry out joint patrols in the area to ward off renewed fighting.

But the target date for the withdrawal came and went on Monday without any hardliners leaving, the Syrian Observatory for Human Rights said.

On Monday, the Assad regime's Foreign Minister Walid al-Moualem "time" is needed to see if extremist groups have complied with the Turkish-Russian deal reached over opposition-held Idlib.

"We must give the time... to judge whether the agreement was fulfilled or not," Moualem said.

"We have to wait for the Russian reaction. Russia is monitoring and following the situation," he added.

He warned, however, that the situation in Idlib cannot continue if the extremists do not comply with the agreement for the area, on the day of a critical deal deadline.

"We cannot keep quiet about the continuation of the current situation in Idlib if the Nusra Front refuses to comply with this agreement," Moualem said at a press conference with his Iraqi counterpart Ibrahim al-Jaafari in Damascus.

Hayat Tahrir al-Sham (HTS), an extremist alliance spearheaded by al-Qaida's former Syrian affiliate previously known as the Nusra Front, signaled Sunday it would abide by the terms of the deal to prevent an Assad regime offensive on the opposition-held enclave, but the midnight deadline passed without visible withdrawal from the buffer zone.

Turkey has been working to persuade HTS, the most powerful opposition alliance in Idlib, to comply with its agreement arranged with the Assad regime's main ally Russia.

After the fall of Aleppo in November 2016, dozens of opposition groups, including Ahrar al-Sham and the HTS, squeezed into Idlib. The HTS is recognized as a terrorist organization by Turkey, the U.S. and Canada. As a result of Ankara's efforts to prevent a humanitarian crisis and the Sochi deal with Russia, more than 30,000 civilians, who had fled from a possible regime attack, have returned to their homes in Idlib.