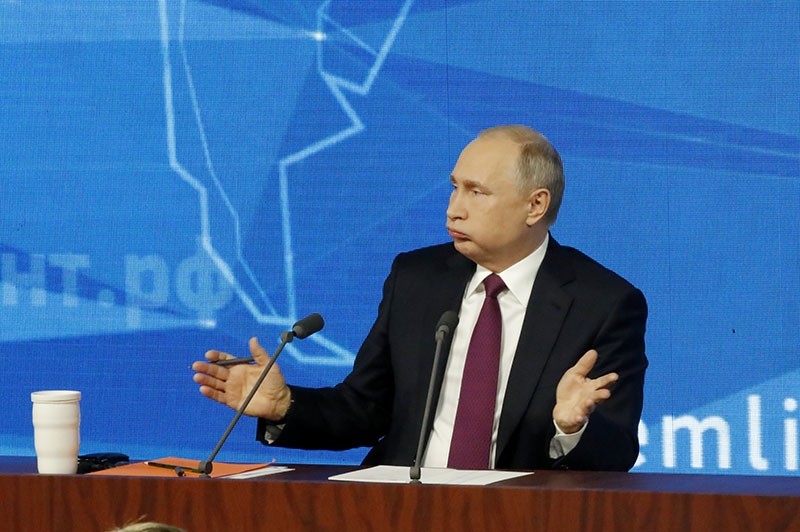 Commenting on Trump ordering U.S. troops home from Syria, Putin said, "I don't know what US withdrawal from Syria means, Americans have been in Afghanistan for 17 years and every year they say they're withdrawing."

Trump said on Wednesday that the United States had defeated the Daesh terrorist group in Syria, and that this fulfilled the only goal for keeping U.S. troops in the country.

U.S. officials also stated that American troops in the war-torn country will soon start to withdraw.

Putin reaffirmed the long-held Russian argument that the U.S. presence in Syria was illegitimate because it hasn't been vetted by the United Nations Security Council or approved by Bashar Assad's regime, which has international recognition. Putin added that "if the U.S. decided to withdraw its contingent, it has done the right thing."

Washington's decision to pull troops out of Syria has come after a phone call between President Recep Tayyip Erdoğan and his U.S. counterpart Donald Trump, Reuters reported late Wednesday citing a U.S. official.

"Everything that has followed is implementing the agreement that was made in that call," he said.

The time frame for U.S troop pullout from the country is expected to be between 60 to 100 days, the official added.

"All U.S. military forces will be pulled out once final stages of last operation against ISIS is complete," the official was also quoted as saying by the agency, using an alternate acronym for Daesh terrorist group.

"All U.S. State Department personnel are being evacuated from Syria within 24 hours."

The White House said later Wednesday that Trump had informed Erdoğan of the decision to withdraw troops. The presidents talk on the phone frequently, it added.

The report claiming that the U.S. is considering withdrawing its troops from Syria came nearly a week after Erdoğan announced that Turkey will soon conduct a cross-border operation to liberate areas controlled by PKK terrorist organization's Syrian affiliate People's Protection Units (YPG) in Syria.

It has been reported that the U.S. still has about 2,000 troops in Syria, many of whom working in close cooperation with Syrian Democratic Forces (SDF) which is dominated by the YPG.

Iran and the Assad regime also have expressed their opposition to the presence of hundreds of the U.S. troops in the southeastern part of the country close to the border with Iraq, citing the deployment as "illegal" and an "act of aggression."