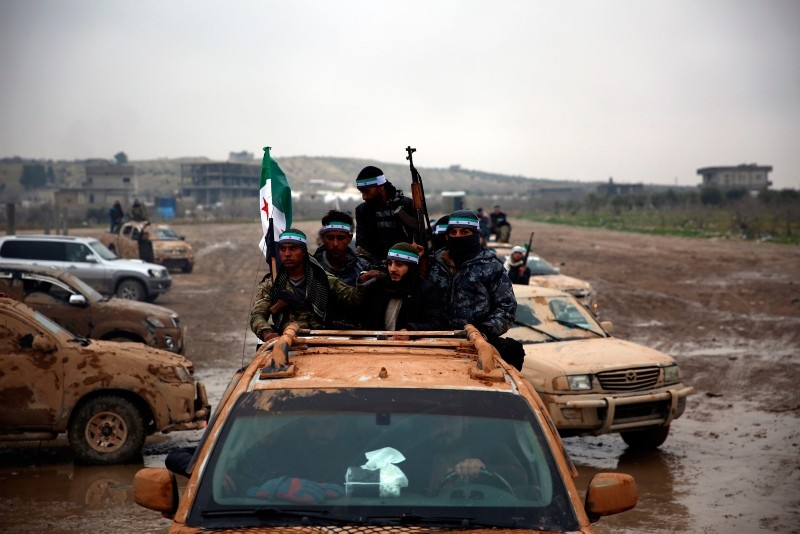 This Dec. 25, 2018 photo shows the Free Syrian Army (FSA) fighters in the back of their trucks as they leave their barracks in the town of Jarabulus, as they prepare to move towards Manbij. (AFP Photo)
by daily sabah
Dec 28, 2018 12:00 am

Turkey-backed Free Syrian Army (FSA) on Friday said its convoys were moving toward the frontlines in the northern Syrian in "full readiness... to start military operations to liberate" Manbij town.

The FSA forces started moving from the city of Jarablus, liberated by the group and Turkey during Operation Euphrates Shield. Both lightly and heavily armed fighters were traveling in the FSA convoy.

The deployment toward Manbij started after the Assad regime said Friday that it had entered the town held by the PKK terror group's Syrian affiliates the People's Protection Units (YPG).

The Assad regime army said it now "guarantees full security for all Syrian citizens and others present" in the town, which previously was home to a U.S. military base.

The announcement came moments after YPG terrorists called on regime to take control of Manbij as the countdown for Turkey's crossborder counterrorism operation was underway.

In a statement shared on Twitter, the YPG said it invited the Syrian regime "to send its armed forces to take over these positions and protect Manbij in the face of Turkish threats."