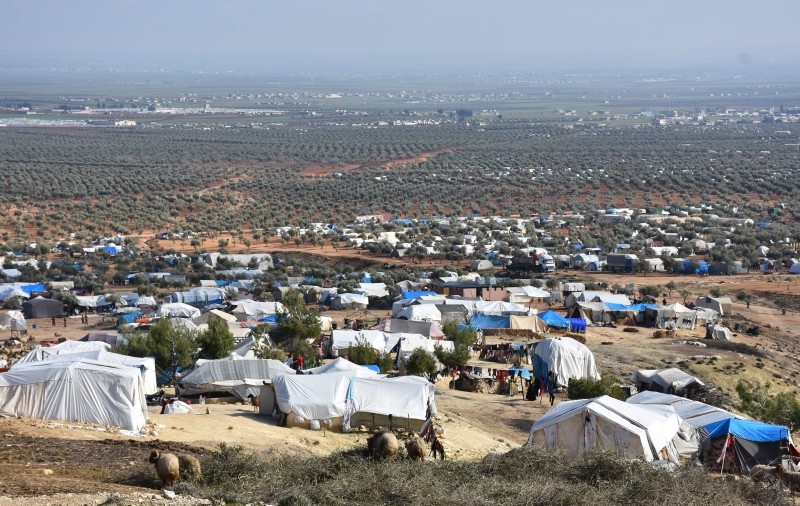 The countryside of the northern Syrian town of Azaz is home to some 250,000 civilians of Arab descent from Tal Rifaat trying to survive in makeshift camps. (AA Photo)
by Anadolu Agency Feb 15, 2019 3:59 pm

Around 250,000 displaced residents of Syria's Tel Rifat are struggling to survive in camps set up along the Turkish border due to the three-year-long occupation of their city by the People's Protection Units (YPG) terrorist group, which is the Syrian offshoot of the PKK.

In February of 2016, YPG/PKK terrorists captured Tel Rifat -- located southeast of Afrin, which was then also under terrorist occupation -- with the help of Russian air support.

By doing so, the terrorists hoped to consolidate their hold over the region between the east bank of the Euphrates River and western Afrin, thus linking all the territories under their control.

However, the Al-Bab district, located between Tel Rifat and Manbij, falls within the area liberated by Turkey's Operation Euphrates Shield, rendering it impossible for the terrorists to link the two regions.

Operation Euphrates Shield, which began in August of 2016 and ended in March of 2017, was aimed at ensuring security and eliminating the terrorist threat along Turkey's borders.

During its initial occupation of Tel Rifat, the YPG/PKK forced some 250,000 Arab residents of the city to leave their homes.

For the past three years, therefore, many of these displaced people have been residing in the nearby city of Azaz, located adjacent to Euphrates Shield's area-of-operations.

'Turkey was our only shelter'

"The only place to find shelter was Turkey," Amir Allito, a displaced Tel Rifat resident, told Anadolu Agency while explaining why he and his family had had to flee their city.

"We left Tel Rifat amid Russian air attacks and attacks by land by the YPG/PKK," Allito recalled. "We didn't know where to go; we reached the border by foot."

During his first year at the camp, Allito said, as many as 50 people had had to share a single tent.

"It's now been three years; we want to go home," he said, adding that he and his family could not return to Tel Rifat due to the ongoing occupation of the area by the YPG/PKK backed by Russia and the Assad regime.

Yusuf Quwais, a displaced 12-year-old resident of Tel Rifat, said he and his family had committed no crime to have been forced to leave their homes.

"All of my friends migrated like me," he lamented. "Everyone went to different places. Now we have no friends or anything else."

YPG/PKK terrorists, meanwhile, have continued to stage attacks on residential areas of Tel Rifat liberated earlier by Turkish forces, which generally respond to such provocations with artillery fire.