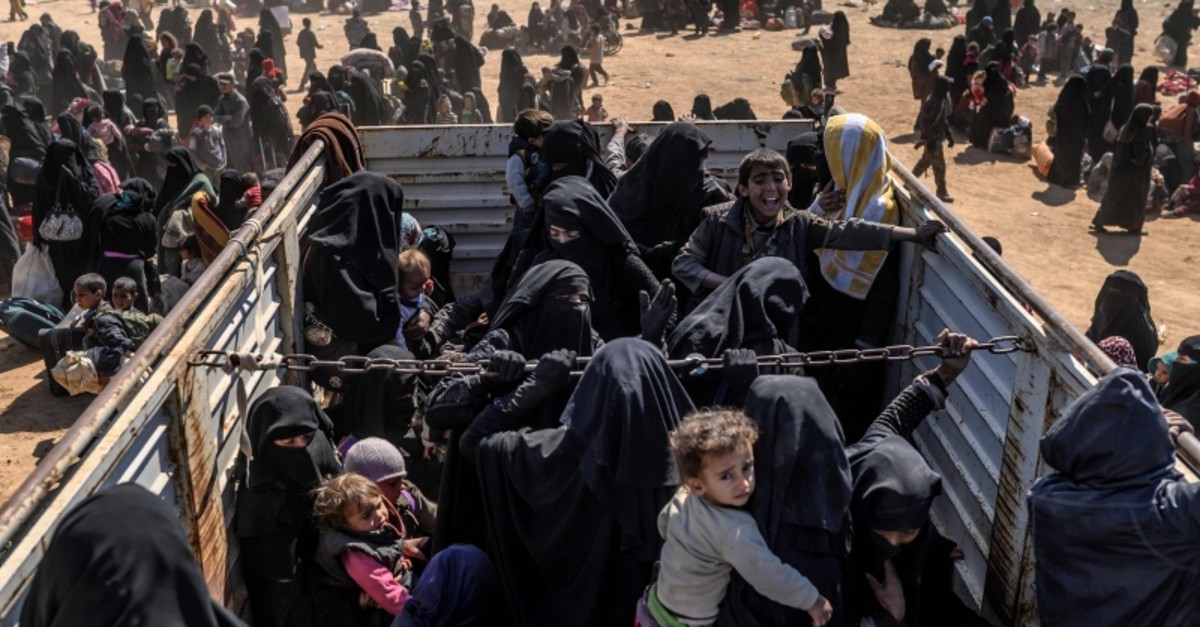 Women and children evacuated from Daesh's embattled holdout of Baghouz arrive at a screening area held by the US-backed Syrian Democratic Forces (SDF), in the eastern Syrian province of Deir el-Zour, on March 6, 2019. (AFP Photo)
by Compiled from Wire Services Mar 07, 2019 4:47 pm

Angry crowds evacuating from the last shred of territory held by Daesh militants in Syria praised the extremist group Wednesday and chanted "[Islamic State] will remain," in a menacing show of support, even as defeat loomed.

There were no signs of combat as calm prevailed for a third day to allow for evacuations from the eastern Syrian village of Baghouz. Associated Press journalists positioned across from the Daesh's riverside pocket of land saw lines of pickup trucks, motorcycles and people walking on foot, apparently a group of evacuees.

The U.S.-backed Syrian Democratic Forces (SDF), which is dominated by the PKK-linked People's Protection Units (YPG) terrorists and spearheading the fight against Daesh in Syria, has been surprised by the large number of civilians — family members of Daesh fighters in the thousands — who have been streaming out of the tiny enclave. In recent weeks, the SDF has been alternately applying military force to put pressure on militants who refuse to surrender and holding fire long enough to allow for evacuations and surrender.

Thousands of people have trickled out of Baghouz in the last few days. The latest wave of evacuations brings the Daesh a step closer to defeat by the SDF. That would be a milestone in the devastating four-year campaign to defeat the group's so-called "caliphate" that once covered a vast territory straddling both Syria and Iraq. The fight against Daesh has taken place amid Syria's nearly 8-year-old civil war.

On Wednesday, hundreds of evacuees walked through the dusty desert plateau to get on trucks to carry them to displaced persons camps miles away. Meanwhile, lines of men walked guided by their enemy, the SDF, to another corner of the plateau to be screened and searched by members of the U.S-led coalition.

As defeat neared, the anger of defiant supporters among the evacuees was palpable.

Women seen at a reception area set up in the desert, where they were screened by SDF officials, were rowdy and aggressive. They angrily denounced journalists, and praised Daesh. Engulfed in conservative black robes with a black face covers, they pointed their fingers at the sky and screamed: "Islamic State will stay, God is great, God is great, Islamic State will stay!" Two women took off their shoes and raised them in the direction of journalists. "Take a picture of the shoe, the shoes are better than you," one said. Children joined, raising their fingers in the air.

A man who refused to give his name screamed at journalists filming the evacuees praying, and decried their being depicted as terrorists. "We only implemented God's laws," he shouted, covering half his face.

Abu Sham, a member of the Daesh religious police who exited Baghouz on Tuesday, said fighters who remained inside are willing to die for the group.

"The Islamic State is not finished," the 39-year old said, using a moniker that means the father of Syria. "I didn't lose hope."

A 30-year-old Iraqi woman said her 1-month-old baby, who was sick, died overnight in the reception area from the cold.

"I didn't want to leave except to treat her," said the woman who identified herself as Um Fatima. She cursed the SDF and said: "The Islamic state will remain and expand, God willing," and walked away. A group of men were seated on the ground, under the watchful eye of SDF fighters, many of them covering their faces with checkered scarves.

Many among those leaving Wednesday appeared to be wives and children of Daesh militants. But among those who emerged were 13 Yazidi children from Iraq, looking dusty and dirty and in a state of shock. At least 75 men also came out, going straight to the interrogation area.

The scenes of surrender, humiliation and anger highlighted the desperation of the group as their last bastion teeters on the edge of collapse.

The SDF announced a military operation to liberate Baghouz in September, but has held off on a full blown assault after it became apparent that a huge number of civilians were still inside. Over the last three weeks, more than 10,000 people, many of them exhausted and wounded Daesh followers, have evacuated.

At Al-Hol camp, a camp north of Baghouz where displaced civilians have been evacuated, the situation has become "completely overwhelming", said Misty Buswell of the International Rescue Committee.

"No one could have guessed that there could still be so many children and women in Baghouz," she said. "Particularly vulnerable are the many heavily pregnant women as well as mothers with newborns."

More than 50,000 evacuees have been squeezed into the camp, where the foreigners await a decision on their fate. Their countries of origin have been reluctant to take them back, wary of security risks and the political backlash. The SDF have warned however that they would not carry that burden much longer and that other avenues are being explored.

Iraq has already confirmed it received 14 French nationals suspected of fighting for Daesh in Syria.

"There's still lots of people inside," said Safia, a 24-year-old Belgian woman among those trucked out by the SDF on Tuesday, adding that her French husband was among them.

Western forces from the US-led coalition -- which also includes France, one of the main sources of foreign Daesh fighters -- searched for wanted individuals among the new arrivals.

On Tuesday, the wife of French militant Jean-Michel Clain confirmed her husband had been killed in Baghouz, days after his brother Fabien.

The brothers were featured in a video claiming responsibility for a 2015 shooting rampage in the streets of Paris that remains France's deadliest ever terrorist attack.

Clain's widow Dorothee Maquere fled the enclave with her five children and told AFP she did not want to return to France.

"The last days were horrible," said Sana, a 47-year-old Finnish woman among the thousands who fled the bastion on Tuesday.

"Bombing, shooting, burning all the tents... you would wake up and everything was destroyed."

Veiled from head to toe, Sana mixed milk powder with water to feed her children.

The mother of four said she came to Syria with her Moroccan husband four years ago for the sake of Islam.

"In the beginning yes, everything was normal," she said, a narrow slit in her veil revealing honey-colored eyes.

"Without bombings, everything was nice, we were happy," she told AFP.

She has since lost her husband to a car accident and has followed militants across Syria's east and northeast, not settling in one place for longer than 16 months. She said she wished she could reverse her decision to join Daesh.

Many of those filing out of Baghouz are weak after living for weeks with scarce food and hiding from bombs in underground shelters. The authorities in Al-Hol and other camps for evacuees are overwhelmed and entire families have had to sleep rough.

Dozens of children are unaccompanied and the toll of those who died shortly after arriving or en route from Baghouz has risen to 90 since December, according to the UN.

Officers in the SDF and aid groups have voiced surprise that the flow of evacuees never seemed to dry up after weeks of evacuations.

Around a tenth of the 57,000 people who have fled the last Daesh bastion since December were militants trying to slip back into civilian life, according to SDF officers and the Syrian Observatory for Human Rights.

The militants — many of them foreigners, including Iraqis and Central Asians along with some Syrian fighters — are now fighting their final battle, holed up in tunnels and caves inside Baghouz. An SDF commander said Wednesday when the last batch of civilians and evacuees leave, the group will bomb the remaining hardcore militants who have vowed to die in Baghouz.

The commander said those fighters are ready to blow themselves up. He spoke on condition of anonymity because he was not authorized to speak to the media.

Another SDF military commander said at least 400 Daesh fighters were caught trying to leave Tuesday. He said the men were working with a smuggling ring to get away from SDF areas. He also spoke on condition of anonymity.

After days without fighting, the SDF and the coalition launched an intense assault Friday that targeted an ammunition warehouse in the Daesh-held area and advanced forces inside, tightening the noose on the militants.

Evacuees said the strikes ignited a fire that burned part of the tent encampment where thousands of family members and civilians had been placed. The fire forced many people to run toward the nearby Euphrates River, where some dug holes on the waterfront to seek refuge, said Abu Mariam, a 28-year-old Syrian man from the coastal province of Tartus who lost his wife and two children in the fire.

"We dig tunnels underground, and we cover them with blankets, that's the tents," said Abu Maryam,.

"We lived... on top of each other because there were so many people."

He said he lost his wife and two children during shelling on Baghouz only days ago.

"They burned and I lost everything," he said.

"I just want to leave and rest a bit."

Militants allowed women, children and the wounded to quit the bombed-out bastion in recent weeks, but it has prevented men of fighting age from fleeing, according to survivors. But they are now allowing men to leave as death and destruction take hold.

But the Iraqi woman waited until militants released her 20-year-old son before escaping, with him and her two daughters.

"Men under 40 who wanted to go out were imprisoned in a guarded tent," she said. "But only two days ago they let them go."

Loubna, a 30-year-old woman from the northern Syrian town of al-Bab, said there were many bodies on the streets in the Daesh-held area, burned by the fire. The fire was still smoldering days later.

Loubna said she opted to leave but her husband, a Syrian, decided to stay. He will fight till the end, she said, adding he is prepared to blow himself up. "They have their planes. We have God's help," she said. Loubna said didn't think she would see her husband again, and will raise her five kids to become militants.