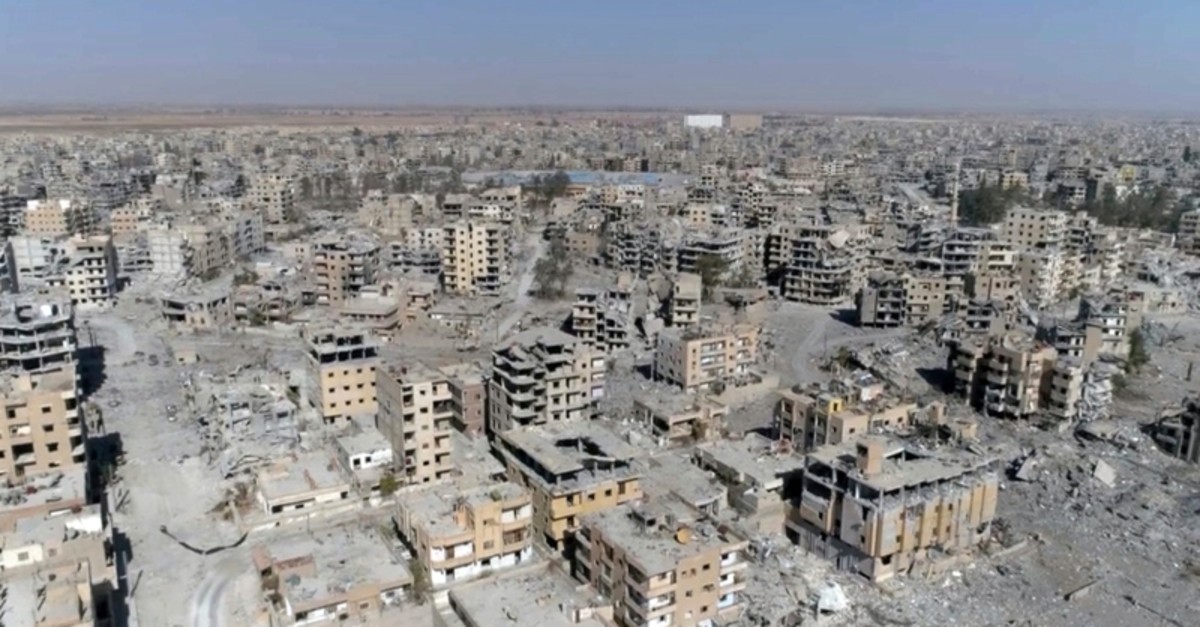 The U.S.-led coalition killed more than 1,600 civilians in the northern Syria city of Raqqa during months of bombardment that liberated it from the Daesh terror group, far more than the number announced earlier by the U.S.-led coalition, Amnesty International and a London-based watchdog group said Thursday.

Amnesty and Airwars said the toll came after the "most comprehensive investigation into civilian deaths in a modern conflict."

Airwars urged the U.S.-led coalition to take responsibility for the deaths of large numbers of civilians who were trapped between Daesh snipers, landmines and coalition attacks.

The interactive website, called "Rhetoric Versus Reality: How the Most Precise Air Campaign in History Left Raqqa the Most Destroyed City in Modern Times," said that between June and October 2017, the coalition launched thousands of air and artillery strikes to support the Syrian Democratic Forces (SDF), which are dominated by the PKK's Syrian affiliate, the People's Protection Units (YPG).

Stressing that the coalition claimed to have taken all the necessary measures to spare civilians, the website said this rhetoric was "a far cry from reality" as it did not coincide with the facts on the ground for the civilians who were slaughtered during the military campaign.

According to the website, the coalition conducted indiscriminate strikes in residential neighborhoods of the city; whereas former U.S. Defense Secretary James Mattis defined the anti-Daesh alliance as the "good guys" who took many precautions to avoid civilian casualties "at all costs."

The website pointed out that the coalition strikes led to the decimation of entire families, referring to one tragic incident where four families sheltering in the basement of a five-story building were hit by airstrikes, leaving at least 32 dead, including 20 children.

"I've lost everyone who was dear to me. My four children, my husband, my mother, my sister, my whole family," said Ayat Mohammed Jasem, a survivor of the airstrike.

The website stated that the coalition admitted to killing 159 civilians in Raqqa, which is barely 10 percent of the real number, and stressed it must take responsibility for the deaths of all the civilians.

The U.S.-led coalition said last month that 1,257 civilians were killed in airstrikes against Daesh over four years in Syria and Iraq.

"We continue to employ thorough and deliberate targeting and strike processes to minimize the impact of our operations on civilian populations and infrastructure," the coalition said.

Amnesty International and Airwars urged the coalition to make public all relevant information, set up an independent and impartial mechanism to investigate the matter and create a fund to help the families of the deceased.

In June last year, an Amnesty International report said hundreds of civilians were killed in Raqqa, while the Airwars said it has evidence of 1,400 fatalities.

The statement said Amnesty International's innovative Strike Trackers project also identified when each of the more than 11,000 destroyed buildings in Raqqa was hit. More than 3,000 digital activists in 124 countries took part, analyzing a total of more than 2 million satellite image frames, it said.

"The Coalition needs to fully investigate what went wrong in Raqqa and learn from those lessons to prevent inflicting such tremendous suffering on civilians caught in future military operations," said Chris Woods, director of Airwars.

Raqqa was the de facto capital of Daesh's self-declared caliphate, which once encompassed a third of Syria and Iraq. Last month, Daesh lost the last area it controlled in eastern Syria marking the end of the so-called caliphate.

The SDF captured Raqqa in October 2017 after a four-month campaign. The U.N estimates that more than 10,000 buildings were destroyed or 80 percent of the city.

Following its emergence during the Syrian civil war, Daesh expanded its territories in Syria and Iraq. Occupying the Syrian cities of Raqqa and Mosul, the terrorist organization had declared a self-proclaimed caliphate. U.S.-led coalition forces were formed in 2014 to combat Daesh. More than four years after Daesh overran large parts of Syria and neighboring Iraq, the terrorist group has lost one territory after another and was left with only a tiny patch in the village of Baghouz near the Iraqi border, which was cleared of the terrorist group recently.