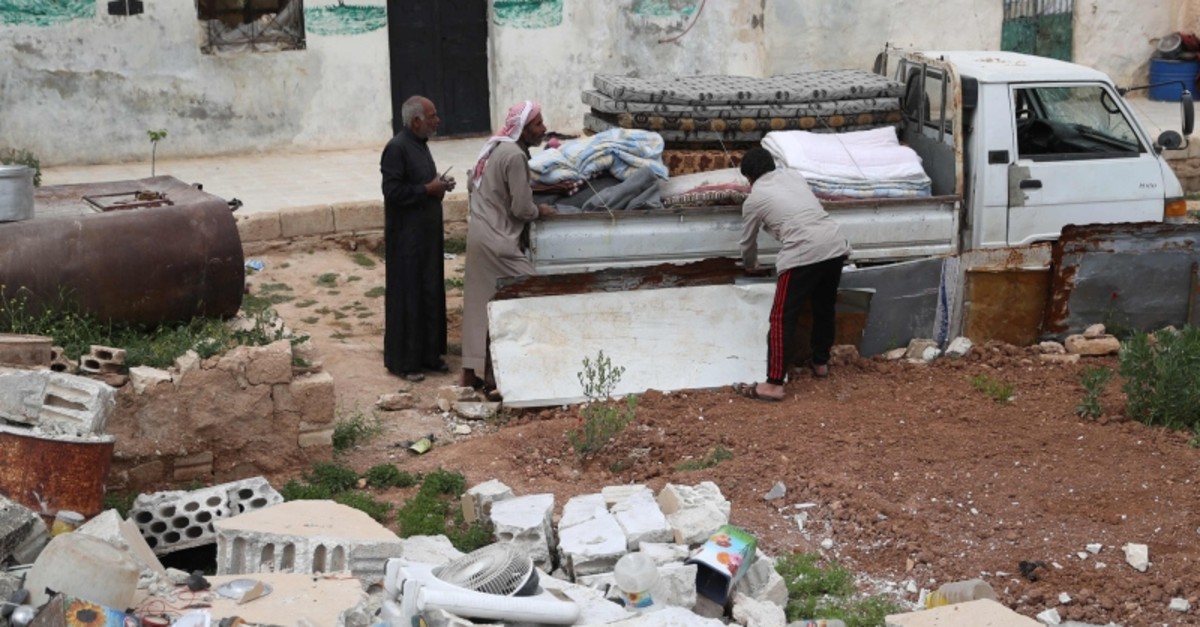 Syrians prepare to leave their houses in the village of Rabaa Jour in the the opposition-held Syrian province of Idlib on May 6, 2019 following reported shelling and air strikes in the area. (AFP Photo)
by Daily Sabah with Agencies May 09, 2019 1:35 pm

The Russian-backed Syrian regime's increased offensive on opposition-held Idlib has killed at least 114 people and forced more than 250,000 to flee, the biggest escalation in the area since an agreement was signed between Turkey and Russia in September. According to various nongovernmental organizations (NGOs), the Bashar Assad regime and Russian forces have dropped more than 3,000 bombs on the city in the past 12 days, which has led to the deaths of some 114 people and injured 248 others.

Assad forces have been using terrorists holed up inside Idlib to carry out intermittent attacks on the city, intensifying their attacks since April 26 when the agreement between Turkey and Russia was signed to turn Idlib into a de-escalation zone in which acts of aggression are strictly prohibited.

As the violence escalates in Syria's last opposition-held northwestern province of Idlib due to attacks by regime forces, the West, particularly the EU, has expressed concern over the situation in the region, underlining that it is "unacceptable."

The latest statement on the issue came from EU Foreign Policy Chief Federica Mogherini on Wednesday, who said that the recent military escalation in northwestern Syria is an "unacceptable violation of international law."

"The recent military escalation in northwestern Syria, with air attacks and artillery shelling targeting schools and hospitals, including with the use of barrel bombs, is an unacceptable violation of international law," Mogherini said in a statement. Mogherini said more than 150,000 civilians have been newly displaced and many have died, adding, "As always, women and children are disproportionately affected by this escalation."

Germany also condemned Syrian regime strikes in the Idlib province over the past two weeks that have killed over 100 civilians.

Speaking at a news conference in Berlin on Wednesday, Germany's deputy foreign ministry spokesman said the Syrian regime and its allies have violated international humanitarian law by targeting schools and hospitals.

"We condemn heavy bombings that targeted the humanitarian infrastructure," Christofer Burger said, adding that several medical facilities funded by Germany were also hit by the airstrikes, in which the regime used barrel bombs.

Idlib, home to 1.5 million people, is the last opposition enclave in Syria that has been protected from a massive regime offensive by the deal reached between Ankara and Moscow in September 2018. The deal established a cease-fire in Idlib on the condition that heavy arms and extremist groups withdraw from the region.

Prior to the agreement, the Assad regime was signaling an expansive military operation against Idlib after it recaptured three "de-escalation" zones out of four determined by the Astana process in Idlib, north of the central city of Homs, the Eastern Ghouta area outside Damascus and in the southern provinces of Daraa and Quneitra.

However, despite the deal, regime attacks on the last opposition enclave have been escalating for some time, killing thousands of civilians with many others injured and fueling concerns that a new crisis will erupt. A new refugee crisis is not only a concern for Turkey, which already hosts nearly 4 million refugees, but it would also have implications for Europe. It has been estimated that around 700,000 people may arrive in Turkey from where they might attempt to go to Europe.

The European Union last week called for protecting the inhabitants of Idlib and ensuring humanitarian access to the province. "With the marked increase of airstrikes over Idlib province and northern Hama over the past weeks and days, we are once again running the risk of a dangerous escalation in Idlib," said a statement by the EU spokesperson. "The civilian population cannot afford this risk: they have already suffered far too much," the statement added.

Why the violence in Idlib ​has escalated again

There is a significant presence of the extremist Tahrir al-Sham terrorist organization, the latest incarnation of the former Nusra Front, which was part of al-Qaida until 2016, in northwest Syria including Idlib province and a belt of territory around it.

The Tahrir al-Sham, which is also recognized as a terrorist group by Turkey, has tightened its grip recently against the Turkey-backed National Front of Liberation (NFL), which was formed as an umbrella organization last year by 11 opposition groups in Idlib.

Turkey has established about a dozen military positions in the area under its agreements with Russia that created a demilitarized zone from which militants were required to withdraw, effectively putting the onus on Turkey to tackle the problem while leaving the northwest within the sphere of Turkish influence.

As Reuters reported, the presence of terrorist groups in the region gives a pretext to both Russia and the Bashar Assad regime to intensify their attacks on the region.

Meanwhile, the Syrian regime captured Thursday a northwestern village, known for its medieval fortress, as it moved closer to Idlib, activists and pro-regime media said.

The pro-regime Syrian Central Military Media said troops took Qalaat al-Madiq and two smaller nearby villages. Government troops had been holding the nearby fortress, which also carries the name of Qalaat al-Madiq. The village, near the Orontes River, is a gateway to the fertile plain of al-Ghab, a breadbasket for the central province of Hama. The village was built on the site of the ancient city of Apamea and the fortress overlooking it was built during Muslim rule in the 12th century.

Thursday's push came a day after regime troops took the nearby village of Kfar Nabudah, which activists called Idlib's first line of defense.

The civil war in Syria erupted in 2011 when the Assad regime harshly responded to protesters who had poured onto the streets to demand more rights and freedom. The cruelty against the protesters triggered a rebellion in significant parts of the country, turning into a brutal civil war. While more than 400,000 people have been killed, around 6 million people have been displaced internally and another 5 million were driven abroad as refugees since the beginning of the civil war, according to U.N. figures.

According to local NGO Emergency Response Coordinators, nearly 400,000 civilians have been displaced due to regime attacks on Idlib since the agreement for the de-escalation deal was signed.