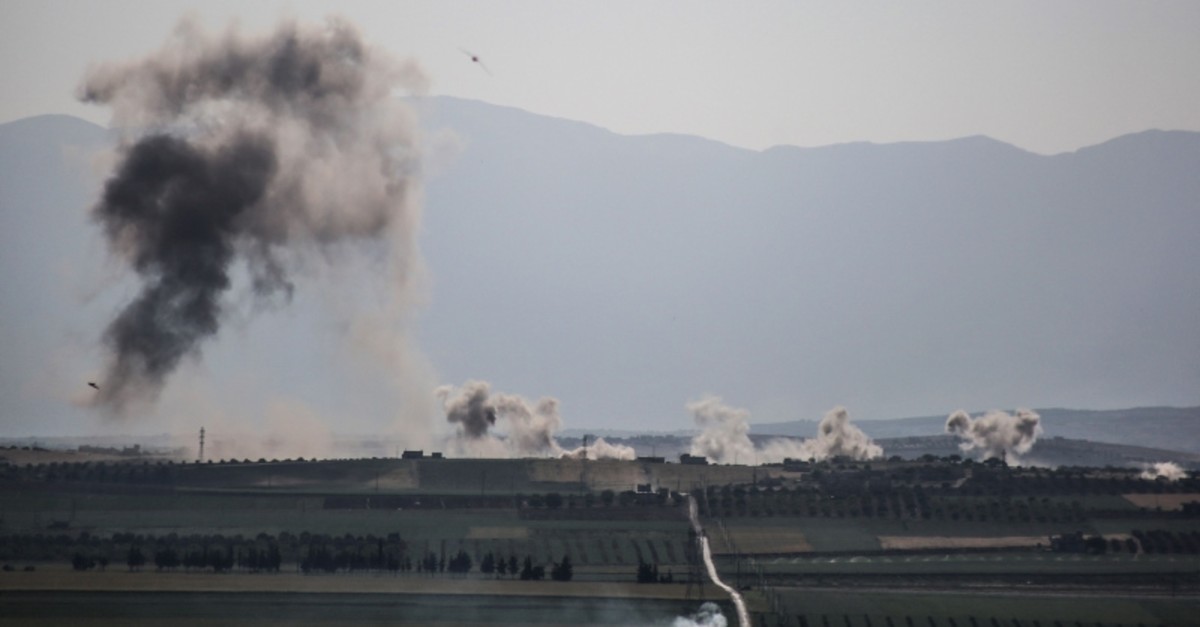 Smoke billows following reported shelling around the village of al-Muntar on the southern edges of the opposition-held Idlib province on May 12, 2019. (AFP Photo)
by Associated Press May 17, 2019 10:29 pm

The violence endangers a cease-fire negotiated by Russia and Turkey, in place since September. Russia has firmly backed Bashar Assad's regime in the eight-year civil war, while Turkey has supported opposition factions.

In their appeal issued Friday, some 70 aid groups called for an immediate end to the fighting. They said that the violence has displaced an estimated 180,000 people in the last two weeks alone. The opposition enclave, which stretches between northern Hama and most of Idlib provinces, is home to 3 million people.

The violence has forced at least 16 humanitarian organizations to suspend their operations in the region, the groups added. The staff were either displaced themselves or the facilities came under attack.

In New York, the U.N. humanitarian chief said his worst fears that a full-scale military onslaught in northwestern Syria would "unleash a humanitarian nightmare unlike any we have seen" in Syria are now coming true.

Mark Lowcock told a Security Council meeting that escalating violence in the last three weeks in the de-escalation zone in opposition-held Idlib killed up to 160 people, displaced at least 180,000 and left millions "crammed into an ever smaller area."

U.N. political chief Rosemary DiCarlo warned that "if the escalation continues and the offensive pushes forward, we risk catastrophic humanitarian fallout and threats to international peace and security."

She reiterated the U.N.'s call for an urgent de-escalation of violence and urged Turkey and Russia to re-establish a cease-fire in northwest Syria.

Physicians for Human Rights said it has verified that over the last four weeks Assad regime forces and their Russian allies have carried out nine attacks on hospitals and medical facilities.

The aid groups said that at least 15 health facilities and 16 schools were reported to have been significantly damaged or destroyed. At least two health workers were killed.

In a statement, Amnesty International called on the U.N. Security Council, meeting Friday, to pressure Russia over the "deliberate" targeting of health and education facilities and ending the "onslaught" against civilians.

"Bombing hospitals carrying out their medical functions is a war crime," said Lynn Maalouf, Amnesty International's director of research for the Middle East. Maalouf said it was part of a "well-established" pattern by the Assad regime and its allies.

"The international community has so far utterly failed to protect civilians in Syria from the horrors of this conflict," she said.

Staff from four hospitals in Idlib and Hama told Amnesty International that they had been targeted despite sharing their coordinates with the Assad regime and Russian government.

In fighting Friday, activists and opposition members said regime forces attempted to push into a new village in western Hama but were repelled.