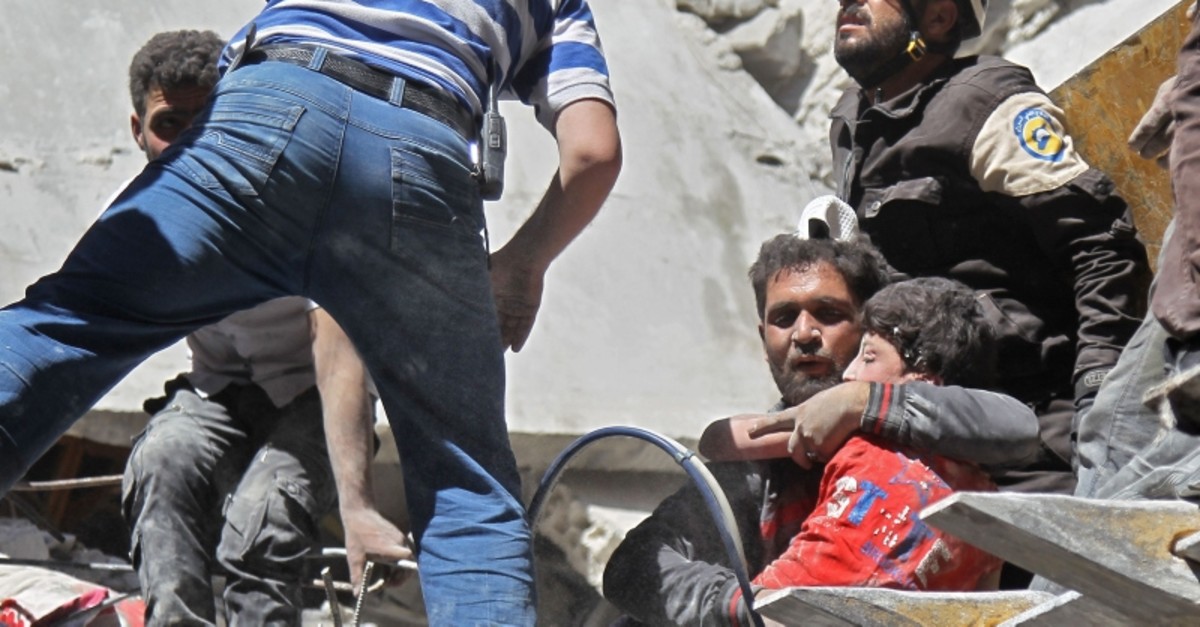 White Helmets rescue a child from the rubble of a building destroyed during an air strike by Assad regime forces on the town of Ariha, in the southern outskirts of Syria's Idlib province on May 27, 2019. (AFP Photo)
by Compiled from Wire Services May 29, 2019 12:45 am

France's foreign minister said on Tuesday there were signs that chemicals had been used in attacks by Assad regime forces on opposition in northwest Syria, but they still needed to be verified.

The United States said on May 23 it had received numerous reports that appeared consistent with chemical exposure after forces loyal to Bashar al-Assad launched an offensive on the opposition stronghold.

"We have a sign of the use of chemical weapons in the Idlib area but for now there isn't verification," Jean-Yves Le Drian told the French parliament's foreign affairs committee.

"We are cautious because we think that the use of chemical weapons must be confirmed and lethal before we react," he said.

The United States, Britain and France launched air strikes in April 2018 against what they described as three Syrian chemical weapons targets in retaliation for a suspected gas attack that killed scores of people in the Damascus suburb earlier that month.

Opponents fighting on the mountainous western edge of Syria's Idlib said on May 19 that the regime had shelled them with poison gas, leading some to suffer choking symptoms. They said they had not documented the attack because they were under bombardment when it occurred.

On Tuesday, at least 21 civilians, including 9 children, were killed in Assad regime's latest attacks on the city.

The bombardments has killed 229 civilians, injured 727 and forced more than 300,000 people to flee since April 28, according to the Union of Medical Care and Relief Organizations (UOSSM), which provides assistance to health facilities.