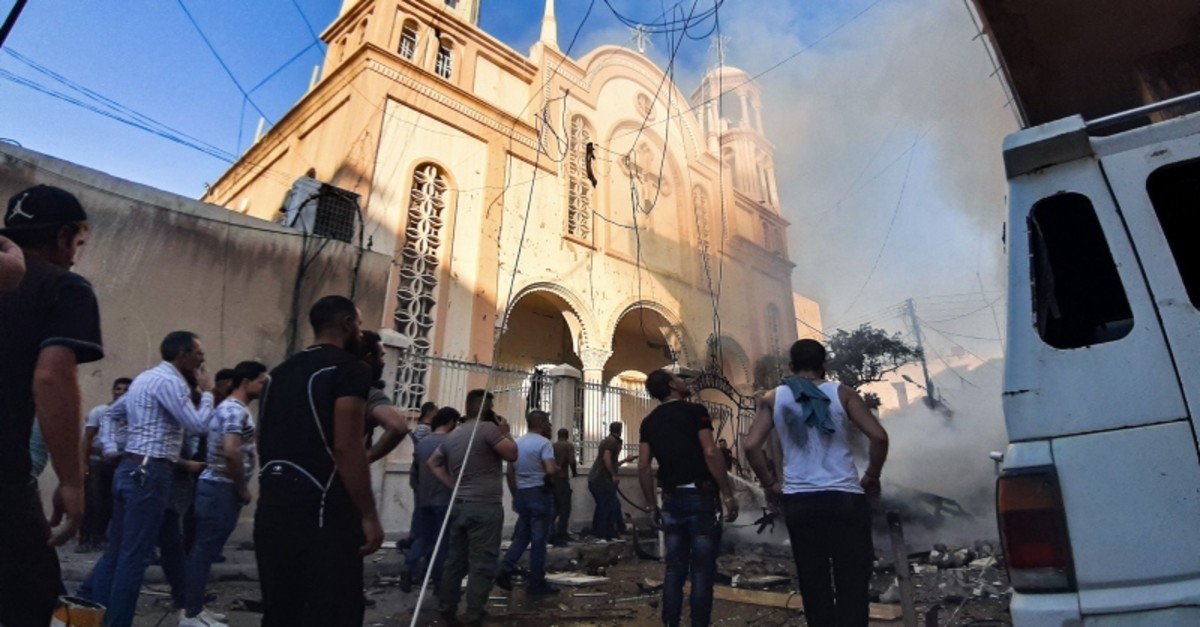 People gather at the scene of a car bomb explosion outside a church in the predominantly-Kurdish city of Qamishli in northeast Syria on July 11, 2019. (AFP Photo)
by Daily Sabah with AFP Jul 11, 2019 6:29 pm

A car bomb exploded near a church in an Assad-regime controlled area of Qamishli, northeastern Syria on Thursday, wounding almost a dozen people, an AFP journalist and regime-controlled media said.

There was no immediate claim for the attack, which Syrian regime television said wounded 11 people and damaged several cars.

The Syrian Observatory for Human Rights, a Britain-based monitor, said only seven people were wounded, and that three among them were in critical condition.

The metal gate of the church was slightly dented by the blast, but the building otherwise emerged intact, the AFP correspondent said.

Much of Qamishli is controlled by the PKK-affiliated People's Protection Units (YPG), the terrorist group with which the United States has partnered in its fight against Daesh terror group, though certain neighborhoods and buildings remain under regime control.

Qamishli is located on the border with the Turkey, near the Turkish city of Nusaybin.

The attack in Qamishli follows the explosion of a bomb-laden tanker in Afrin, northwestern Syria, which killed 11 people and wounded at least 35 others.

According to an Anadolu Agency correspondent on the ground, a bomb planted in a diesel fuel tanker was detonated in a residential area in Tirende, south of the Afrin district center.

The fuel spread around the explosion triggered a fire. Many homes, businesses and vehicles were damaged due to the blast.

The Britain-based Syrian Observatory for Human Rights Observatory and the medical sources said many other people had been injured in the explosion, some very badly.

The Observatory said the blast occurred near a checkpoint at the entrance to the town where vehicles were lined up.