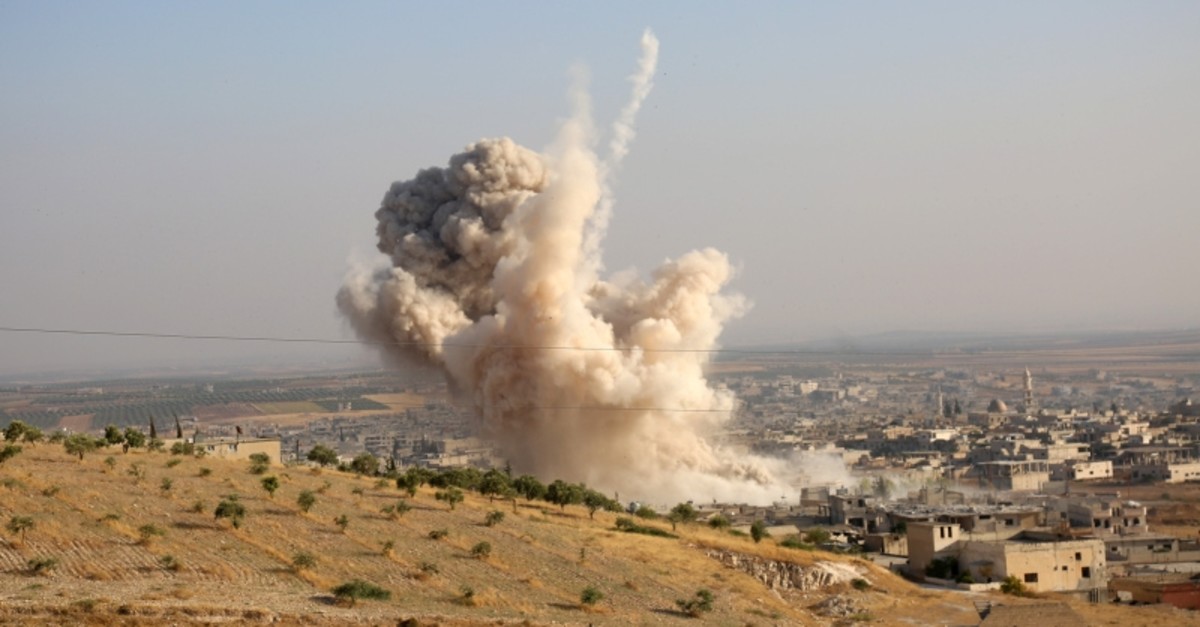 Smoke rises from the town of Khan Sheikhoun in Syria's northwestern Idlib province after an Assad regime strike, on Aug. 14, 2019. (AA Photo)
by Compiled from Wire Services Aug 14, 2019 6:10 pm

The capture of the villages — including Tel Aas, Khirbet Morshed and Kfar Eyn — puts Assad regime troops now about 5 kilometers (3 miles) west of Khan Sheikhoun, one of the largest and most populated towns on the southern edge of Idlib province, the last remaining rebel stronghold in the country eight years into Syria's civil war.

The town is a stronghold of al-Qaida-linked Hayat Tahrir al-Sham, the most powerful group in rebel-held areas. It was the scene of a chemical attack on April 4, 2017 that killed 89 people.

At the time, the United States, Britain and France pointed a finger at the Syrian regime, saying their experts had found that nerve agents were used in the attack. Days later, the U.S. fired 59 Tomahawk missiles at the Shayrat Air Base in central Syria upon President Donald Trump's order, saying that the attack on Khan Sheikhoun was launched from the base.

An investigation conducted by the United Nations and the Organisation for the Prohibition of Chemical Weapons said the Syrian government was responsible for releasing sarin on the town on April 4, 2017. Damascus denies using such weapons.

Regime troops and their pro-Iranian allies have been on the offensive against main rebel strongholds in the north of Hama province and the southern districts of Idlib since April 30 with the support of Russian air units.

The three-month campaign of airstrikes and shelling has killed more than 2,000 people on both sides and displaced some 400,000. The United Nations says dozens of health centers as well as schools have been targeted.

Over the past days, troops have intensified their offensive, capturing the town of Habeet on Sunday. Activists in the area described regime airstrikes and artillery shelling as "fierce and hysterical."

The aim of the latest regime push appears to be to surround several towns and villages in the rebel-held region of Hama, including the towns of Kfar Zeita and Latamneh, as well as to reach Khan Sheikhoun in Idlib.

The regime-controlled Syrian Central Military Media said pro-regime fighters took the villages after fierce fighting with al-Qaida-linked militants. Troops were continuing to advance toward checkpoints at the western entrance of Khan Sheikhoun, it said.

The state-run SANA news agency said that the armed forces have inflicted heavy losses on "terrorists," a reference to rebels in the area of Idlib.

The Observatory said regime warplanes and helicopters as well as Russian jets are bombarding the farms around Khan Sheikhoun.

"Only the agricultural fields separate the regime troops from reaching the outskirts of Khan Sheikoun," said Rami Abdel Rahman, the head of the observatory.

To the east, pro-Assad fighters are battling to control a hill just six kilometers (less than four miles) from the town, Rahman said, adding that clashes on Wednesday have killed 14 regime forces, as well as 20 militants and seven allied rebels, he said.

"The operation aims to expand regime-controlled area in northern parts of Hama and cut supply lines to rebels," Yazan Mohammed, a media activist based in Idlib province, told The Associated Press.

Many residents of Khan Sheikhoun and nearby villages were fleeing toward safer areas further north in Idlib, he added.

The Response Coordination Group, a relief group active in northwestern Syria, said in a statement Wednesday that more than 40,000 people have fled their homes in areas close to the fighting since early Tuesday. It said many of those who fled are staying on roads or in open-air areas and called on local authorities to open public schools to host the displaced.

AFP correspondents have reported seeing dozens of families flee fighting over the past few days, heading north in trucks piled high with belongings.

Sheikh Sami Rahmoun, a commander of the al-Qaida-linked group, released an audio recording late on Tuesday, acknowledging his fighters have lost territory.

"Don't worry if we lose an area or two," he claimed. "We will be victorious."

Khan Sheikhoun is located on the international M5 Aleppo-Damascus highway, which also passes through Homs. The town has been in the hands of opposition forces since 2014.

A buffer zone deal brokered by Russia and Turkey last year was supposed to protect the Idlib region's three million inhabitants from an all-out regime offensive, but it was never fully implemented.

An alliance led by fighters from the HTS took over full control of the anti-Assad stronghold in May.

Humanitarian workers have warned that any fully-blown ground attack on Idlib would cause one of the worst humanitarian disasters of Syria's war.

The conflict has killed more than 370,000 people and displaced millions at home and abroad since starting with the brutal repression of anti-regime protests in 2011.