14 civilians killed in Russian airstrikes on market in Idlib, Syria 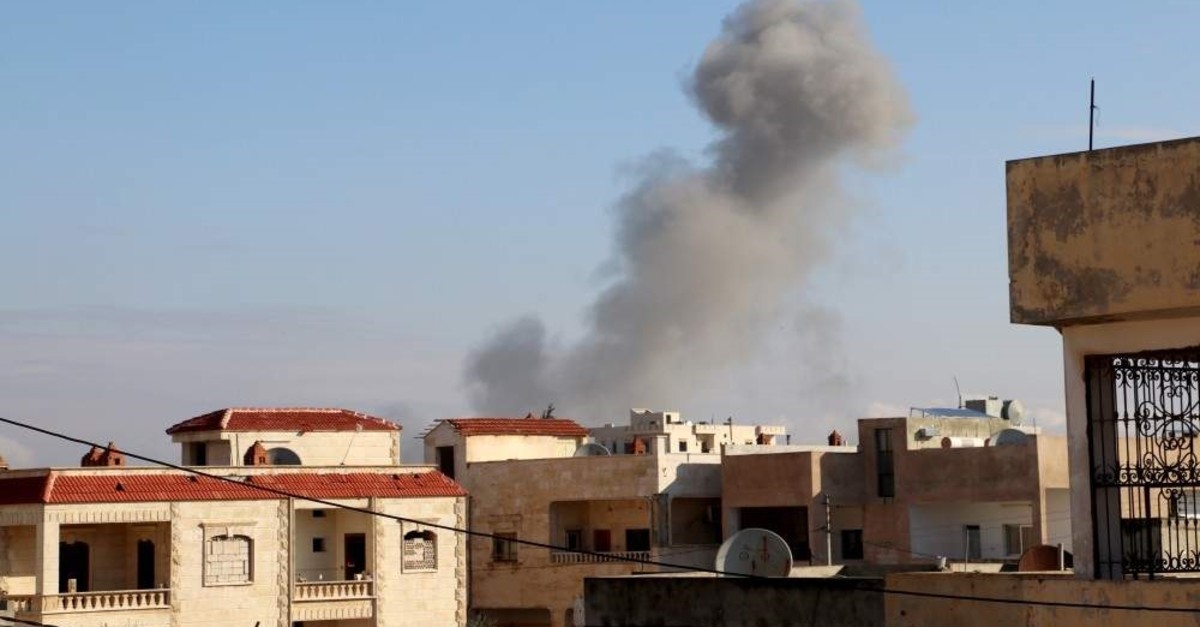 Smoke seen following Russian airstrikes in Syria's Idlib on Monday, Dec. 2, 2019 (AA Photo)
by Compiled from Wire Services Dec 02, 2019 4:48 pm
Russian airstrikes killed at least 14 civilians in an area of northwestern Syria which had been declared free of acts of aggression, the Defense Ministry said Monday.
The Turkish Defense Ministry noted that 27 others were wounded in the airstrikes. Russian warplanes carried out airstrikes on the districts of Maarat Al-Numan, Saraqeb, and several villages in the northwestern province of Idlib, according to the White Helmets. The volunteer group launched various search and rescue efforts following the airstrikes.

"The market was packed with civilians, leading to a massacre and widespread destruction,” the White Helmets announced on their Facebook page alongside photos of its paramedic removing bodies from the market. A beheaded man laid in a pool of blood in the market.

The Syrian Observatory for Human Rights and the White Helmets also reported another airstrike on the nearby town of Saraqeb, claiming the strike killed and wounded several people.

Syrian troops launched a four-month offensive earlier this year against Idlib. Additionally, since the first half of November, attacks by the Assad regime and its ally, Russia, have displaced some 40,000 civilians within the Idlib de-escalation zone, according to Syria's Response Coordination Group, a local nongovernmental organization.

Last September, Turkey and Russia agreed to turn Idlib into a de-escalation zone where acts of aggression are expressly prohibited. The Syrian regime and its allies, however, have consistently broken the terms of the cease-fire, launching frequent attacks inside the zone.
The de-escalation zone is currently home to some 4 million civilians, including hundreds of thousands displaced in recent years by regime forces from throughout the war-weary country. Syria has been locked in a vicious civil war since early 2011 when the regime cracked down on pro-democracy protests with unexpected ferocity. Since then, hundreds of thousands of people have been killed and more than 10 million others displaced, according to U.N. officials.
Last Update: Dec 20, 2019 2:05 am
RELATED TOPICS