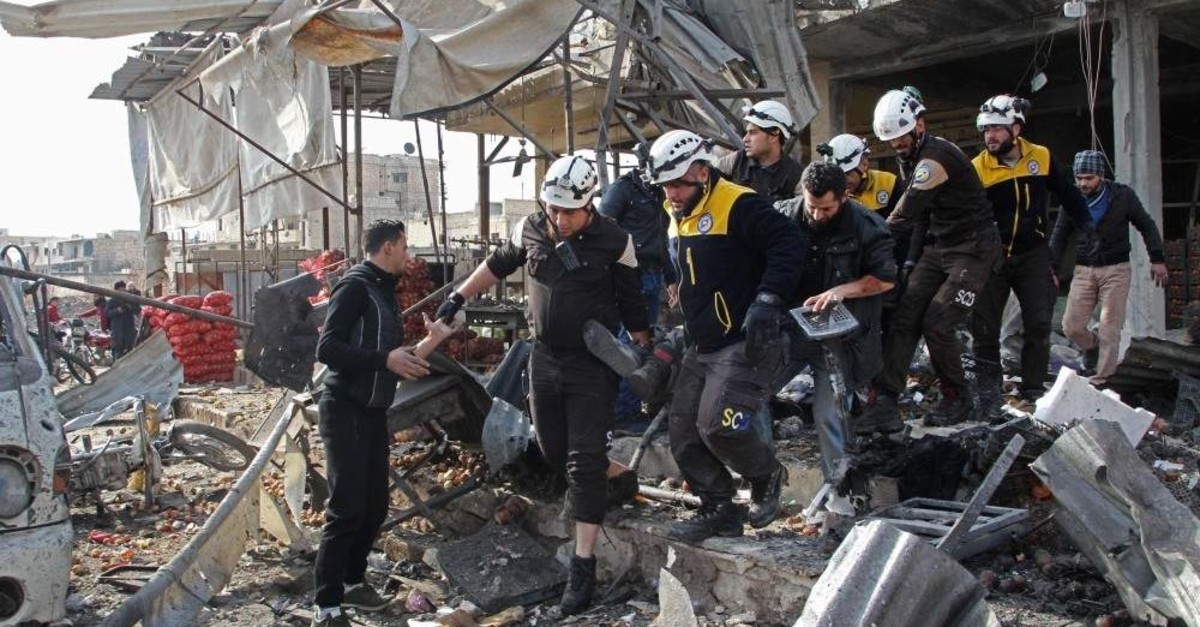 Members of the Syrian Civil Defense (White Helmets) recover a victim following a regime airstrike in a market in Idlib, Dec. 2, 2019. (AFP PHOTO)
by Daily Sabah with Agencies Dec 02, 2019 5:44 pm

Syria’s northwestern province of Idlib had one of its most violent 48 hours as clashes between opposition forces and the Bashar Assad regime left 96 dead over the weekend.
According to the Syrian Observatory for Human Rights (SOHR), regime forces, supported by Russian fighter jets, clashed with opposition groups on several fronts in the southeastern countryside of Idlib on the weekend.
The Britain-based watchdog said it's the heaviest loss of life since a Russian-brokered cease-fire came into effect in late August.
Last September, Turkey, and Russia agreed to turn Idlib into a de-escalation zone where acts of aggression were expressly prohibited. The Syrian regime and its allies, however, consistently broke the terms of this cease-fire, launching frequent attacks inside the zone and violating the Astana process. The de-escalation zone is currently home to some 4 million civilians, including hundreds of thousands displaced in recent years by regime forces throughout the war-weary country.
According to activists based in Idlib, the battles and the heavy airstrikes by Syrian regime forces have led to a new wave of displacement from the war-torn province toward the Turkish border. They added that areas in the southeastern countryside were subjected to hundreds of airstrikes since Friday.
It was reported on Sunday that the Syrian National Army (SNA) and opposition groups took back four settlements that were occupied by the Syrian regime in Idlib. According to military opposition sources, the SNA regained the southern villages of Aciz, Resim al Varad, Istablat and Suruc after intense clashes with regime forces. During this operation, a tank, a personnel carrier, two multiple rocket launchers and a large number of regime soldiers were eliminated. Reportedly, clashes were ongoing after the four villages were seized. Thereby, the opposition has broken the regime's line of defense in Idlib's southeast and in big settlements.
Ankara often warns the international community and regional countries that the attacks could trigger a fresh refugee wave toward the West. Despite the risks of great refugee flows and a humanitarian crisis in general, the regime and its backers continue to terrorize the region.
Regime, Russia target civilians
Apart from the clashes, the regime and Russian airstrikes also continue to target civilians in the last opposition stronghold. The Turkish Defense Ministry announced yesterday that during the attacks that took place yesterday alone, 14 civilians, including women and children, were killed while 20 others were injured.
Russian warplanes carried out airstrikes on the districts of Maarat Al-Numan, Saraqib, and a number of villages in the northwestern province of Idlib, according to the White Helmets.
Following the airstrikes, civil defense teams launched search and rescue efforts.
These ongoing airstrikes are one of the major reasons behind the displacement of locals in Idlib. In the first half of November, attacks by the Assad regime and its supporter Russia displaced some 40,000 civilians within the Idlib de-escalation zone, according to Syria's Response Coordination Group, a local nongovernmental organization.
277 civilians killed in a month
Meanwhile, the Syrian Network for Human Rights (SNHR) released a report on Sunday, showing that a total of 277 civilians were killed in Syria during the month of November alone.
The report revealed that 72 of the killed civilians were children while 32 of them were women. It also showed that the majority of the civilians were killed by the regime and/or Russian forces. According to the human rights group, three of the killed civilians were medical personnel while two of them were media workers, all of whom were killed by regime forces. It was also expressed that in addition to the civilians killed, 27 people were tortured to death during November, 25 at the hands of regime forces while the other two were by the PKK’s Syrian affiliate the People’s Protection Units (YPG).
There have been also 13 massacres in Syria, most of which took place as a result of bomb attacks by unidentified responsible parties. One of them was committed by regime forces, the report said, while four were by Russia. SNHR underlined that the term “massacre” is being used for the incidents where more than five civilians were killed in one incident.
“The report stresses that the Syrian government has violated international humanitarian law and customary law, and all U.N. Security Council resolutions, particularly resolution 2139, resolution 2042, and resolution 2254, all without any accountability,” SNHR said in the report, saying that there is no record of any warnings being issued by the Syrian Regime or Russian forces prior to any attack in accordance with the requirements of international humanitarian law.
Last Update: Dec 20, 2019 2:05 am
RELATED TOPICS