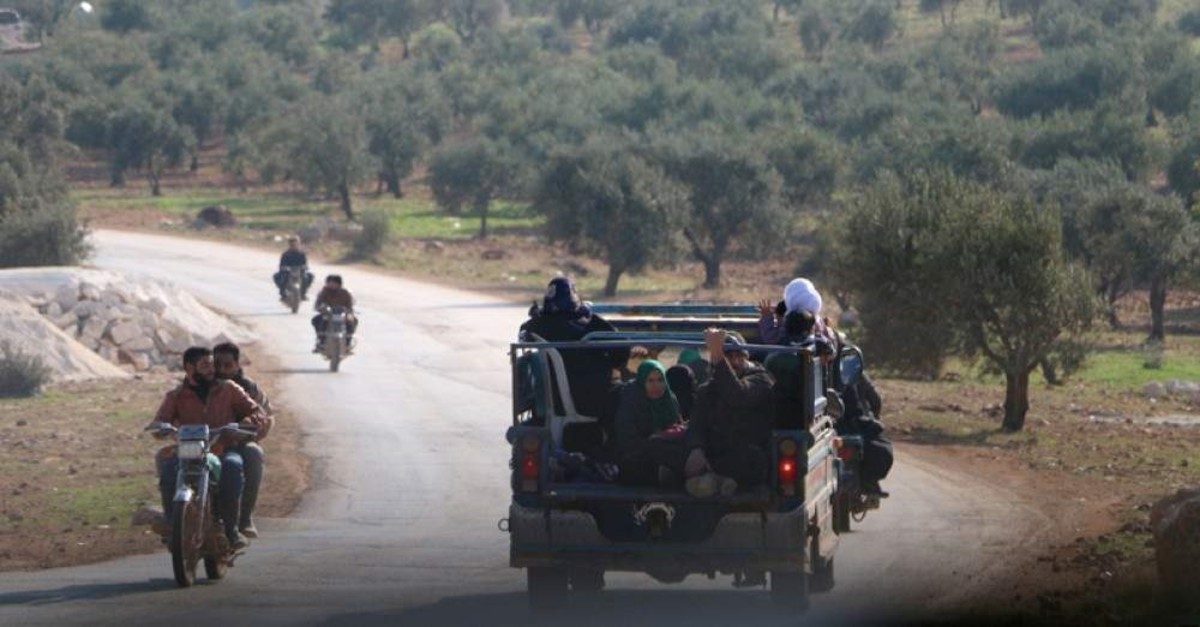 Syrians families flee to safer areas after air strikes in Syria's Idlib. (AA Photo)
by Compiled from Wire Services Dec 07, 2019 3:51 pm
Some 25,000 civilians were displaced in northwestern Syria last week after the attacks of the Bashar Assad regime and Russia on the Idlib de-escalation zone, according to a Syrian NGO on Saturday.
Mohammad Halaj, director of Syria's Response Coordination Group, told Anadolu Agency that thousands of civilians were displaced in the first week of December due to attacks by regime forces, Iran-backed terror groups and Russia.
Halaj underscored that the humanitarian crisis in Idlib was getting worse, and added: "Around 425,000 civilians are living in Maarat al-Nouman, Saraqib and Ariha districts and rural areas. If the attacks target these places with the same violence, the number of displaced will rise more."
He added that the regime forces and Russia also target hospitals, schools, mosques, civilian defense centers and houses to prevent the return of the people.
Most of the displaced people are taking shelter in places neighboring Reyhanlı, in Turkey's southern border province of Hatay, as well as areas liberated from terrorists during Turkey's anti-terror offensives, Operation Euphrates Shield and Operation Olive Branch.
Meanwhile, on Saturday, Syrian regime and Russian airstrikes in Idlib killed 19 civilians, including at least 6 children, a Britain-based monitor said.
The Britain-based Syrian Observatory for Human Rights said airstrikes killed 12 civilians and wounded several others. The death toll later rose to 19, according to Anadolu Agency.
Airstrikes by regime ally Russia killed four civilians including a child in the village of Al-Bara in the south of the region, the Observatory said.
An AFP correspondent at the scene saw rescue workers pick through the rubble of a two-story home whose concrete roof had collapsed.
Rescuers carried away the body of a victim wrapped in a blanket on a stretcher.
Russian raids also killed two civilians including a child in the nearby area of Jabal Zawiya, the Observatory said.
Crude barrel bombs dropped by government helicopters, meanwhile, killed five civilians including three children in the village of Abadeeta, also in the same area.
In the southeast of the embattled region, an air raid by a regime aircraft killed another child in the village of Bajghas, the Observatory said.
The monitor, which relies on sources inside Syria, says it determines the provenance of an airstrike by looking at flight patterns and the aircraft and munitions involved.
Turkey and Russia agreed in September 2018 to turn Idlib into a de-escalation zone where acts of aggression are expressly prohibited.
However, the consistent violations by the Syrian regime and its allies killed over 1,300 civilians since the date of agreement.
The de-escalation zone is currently home to some four million civilians, including hundreds of thousands displaced in recent years by regime forces from throughout the war-weary country.
Syria has been locked in a vicious civil war since early 2011, when the regime cracked down on pro-democracy protests with unexpected ferocity.
Since then, hundreds of thousands of people have been killed and more than 10 million others displaced, according to U.N. officials.
Last Update: Dec 20, 2019 2:12 am
RELATED TOPICS