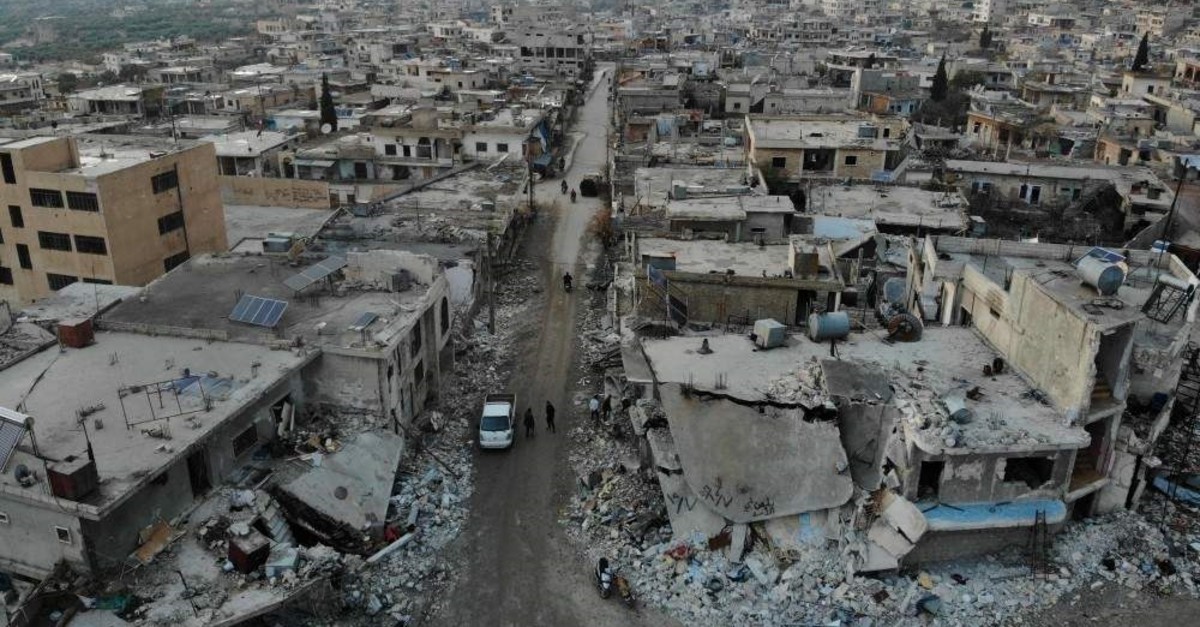 An aerial view shows the damage caused by the reported Syrian regime and Russian airstrikes in the town of Al-Bara in the south of Syria's Idlib province, Dec. 8, 2019. (AFP)
by Daily Sabah Dec 10, 2019 6:48 pm

As Syria's three guarantor countries met in Kazakhstan to discuss the latest situation within the context of Astana process, the Assad regime keeps harming peace efforts by targeting civilians and residential places in Idlib's de-escalation zone

Despite the continued diplomatic process to find common ground for a political solution in Syria, the Russia-backed Bashar Assad regime has continued to violate the Sochi deal between Ankara and Moscow, killing 63 civilians, including 43 children, in its recent attacks targeting residential places in Idlib's de-escalation zone in the last 10 days alone.
In addition to the civilian casualties, heavy bombardment of residential areas has caused another catastrophe in the form of migration waves. More than 90,000 people have fled their homes while 25,000 of them moved near the Turkish borders.

According to local sources, a total of 86 civilian residential areas, including villages, towns and refugee camps, in southern Idlib’s rural areas were bombed during this period. Also, 92,109 people including 16,751 families left their homes and migrated to different regions in the last two weeks.
The deal was signed last September to provide peace and stability in the northwestern province of Idlib and establish de-escalation zones in the area.
Following eight months of relative calm provided by the deal, the regime intensified attacks on April 26 under the pretext of fighting the al-Qaida-linked Hayat Tahrir al-Sham (HTS) terrorists holed up in Idlib. The situation has deteriorated since, claiming more civilian lives with every passing day.

Turkey, which hosts nearly 3.6 million refugees from Syria, has voiced concerns with the international community and regional countries that further offensives could trigger a fresh refugee wave toward the West.

Since the Russia-backed regime forces intensified attacks on Idlib in April, almost 1,300 civilians have lost their lives and more than 1 million people fled to areas near the Turkish border.

In such a climate, Turkey, Russia and Iran gathered Tuesday to conduct technical talks for the 14th meeting of the Astana peace process in Kazakhstan's capital Nur-Sultan.
Officials from the three guarantor countries of the Astana process discussed and evaluated the latest developments in Syria at the meeting, including intensifying humanitarian assistance to the country, helping the return of refugees to their homes and advancing the political process with the launch of the constitutional committee.

The Astana meeting was initiated by Turkey, Iran and Russia to bring the warring sides together and find a permanent solution for the eight-year Syrian civil war. The main agenda of the process has focused on the constitutional process, political transition, security and resettlement. The first meeting of the Astana process was in Turkey in January 2017 to facilitate U.N.-sponsored peace talks in Geneva.

The constitutional committee, including representatives from the opposition, the regime and guarantor countries, is tasked with writing and establishing Syria's post-war constitution, which is seen as a stepping-stone to elections in the war-torn country. The functioning of the committee, however, faces strong resistance from the Bashar Assad regime.

As the committee began its work on Nov. 20 in Geneva with U.N. facilitation to prepare and draft for popular approval of constitutional reforms paving the way for a political settlement in Syria, the Assad regime delegation left on the first day of the second round of talks.

During the previous rounds of Astana talks, the three countries agreed on several topics and implemented them. They decided to strengthen the mechanism established to ensure monitoring of the implementation of the cease-fire in Syria and to create tension zones where the conflict is most intense between the opposition and regime forces.

A joint working group formed by the Astana trio and the U.N. would investigate the fate of missing people and the release of those who have been detained. It has already overseen several detainee swap deals.

In October 2018, the leaders of Turkey, Russia, France and Germany came together in a quadrilateral summit in Istanbul, hoping to lay the groundwork for eventual peace in a country devastated by years of war.

In a final statement, leaders rejected separatist agendas aimed at undermining the sovereignty and territorial integrity of Syria, also highlighting the need to create conditions throughout the country for the safe and voluntary return of refugees and internally displaced persons to their original places of residence in Syria and that the returnees need security from armed conflict, political persecution or arbitrary arrests.

Meanwhile, a U.N. spokesperson said that the Syrian Constitutional Committee's third round of meetings will need co-chairs representing the Syrian regime and its opponents to agree on the agenda.

"For the committee to carry out its work under the Rules of Procedure, agreed by the government and the SNC (Syrian Negotiations Commission), the co-chairs have to agree and put forward their agenda," Jennifer Fenton, the spokesperson for U.N. Special Representative for Syria, said.

"If that agenda can be agreed on then the committee can convene if that is convenient to both sides. The U.N. special envoy continues his consultations to facilitate the process," she said in an interview with Anadolu Agency (AA).

The constitutional committee has co-chairs, Ahmad Kuzbari from the Bashar Assad regime and Hadi Albahra from the opposition chosen from among the committee's 150 members.

The committee's second round of talks on Nov. 25-29 in Geneva, Switzerland ended with the 45-member drafting committee failing to meet due to an uncompromising attitude of the Syrian regime's delegation.

Uncertainty remains as to when the third round of negotiations will begin. After the first round of talks, which were deemed positive, opponents had reported that the third round would be held on Dec. 16. But Fenton told reporters that the committee is unlikely to meet this month.

After the second unsuccessful round of talks in Geneva, Pedersen said: "We have just finished the second session of the constitutional committee. It was not possible to convene a small board of 45 because an agreement on agenda items could not be achieved." He did not mention when the third round of the committee would begin.